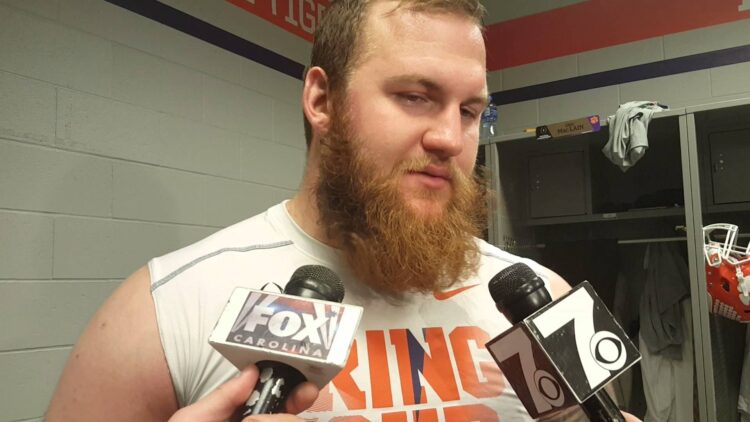 Originally recruited to play tight end, Clemson University guard Eric Mac Lain isn’t your prototypical offensive lineman. A 2011 high school graduate from North Carolina, the 6’5″, 245-pound prospect was the 6th-ranked tight end in the country and a top-60 national recruit, per Rivals. He redshirted as a freshman at Clemson, but played 38 snaps at tight end and 10 snaps at tight end in 2012. By the time 2015 rolled around, Mac Lain had started just one game for the Tigers.

That lack of experience didn’t prevent Mac Lain from becoming a leader for the Tigers, though. Clemson head coach Dabo Swinney praised the left guard for his leadership, on an off the field:

[quote_center]“Eric has been an unbelievable leader. He took Mitch Hyatt under his wing, a true freshman left tackle, getting Guillermo back, Ryan Norton battling through injuries, Joe Gore, Maverick stepping in, Crowder, all those guys, they’ve been incredible. It doesn’t matter who we’ve played, they have been incredibly consistent,” Swinney said, per the Clemson Insider.[/quote_center]

After making the full-time switch to left guard, Mac Lain anchored a unit that helped the Tigers rush for more than 3,000 yards this season. In the National Championship Game, the offense racked up over 500 yards against one of the country’s best defenses. Mac Lain’s proven he can make a position switch at college football’s highest level, which should make him an intriguing prospect in the middle-to-late rounds of the 2016 NFL Draft.

An NSCA Strength All-American award winner in 2015, Mac Lain started all 14 games for the Tigers this season. He was selected First-Team All-ACC following the season and has long been an advocate for community service on campus. Bleacher Report’s Ryan McCrystal recently called Mac Lain a Day 3 prospect “to love,” and the guard began training for the NFL Draft immediately after the National Championship.

Athleticism and versatility make Mac Lain an interchangeable piece along the offensive line.

Though he’s started just 15 games, Mac Lain’s ceiling is through the roof and he should only continue to develop in the NFL.

Mac Lain’s leadership; it’s not often an offensive lineman joins a Hesiman candidate and starting quarterback at the podium after games.

He held his own against NFL-level talent in the Crimson Tide, at times dominating Alabama’s elite defensive linemen.

Often bends with his back and hips, rather than with his knees; can be overpowered and driven back in such situations.

Like Berger, Mac Lain has the ability to play any of the interior offensive line positions. He is a traditional left guard, but has the frame to play center, right guard, and even right tackle in a pinch. Berger was a small-school prospect in 2005 and entered the league with a very similar build as Mac Lain. Coming out of college, Berger was described as a “finesse” blocker” with the athleticism and nimble feet to block in space. Mac Lain shares many of those qualities as a former tight end.

The genesis of Minnesota’s offensive problems start on the offensive line. And no player was arguably worse than left guard Brandon Fusco. While making his return from a torn pectoral muscle, Fusco struggled in the transition from right to left guard. Some may argue that Fusco hadn’t fully recovered from the injury, but the Vikings will need more from their unit up front next season. In a world where Fusco moves back to right guard and John Sullivan returns at center, the Vikings will be in need of a capable left guard.

That player could very well be on the roster. Early in the season, Rick Spielman traded for Nick Easton, who has experience at center but could slide to guard. Zac Kerin is also a young player who may develop into a starting-caliber guard for the Vikings. But if the Vikings want to add more depth to the roster, Mac Lain could be an intriguing option in the fourth of fifth round of the 2016 NFL Draft.