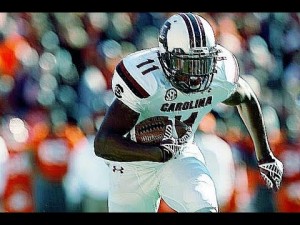 [vc_row][vc_column][vc_column_text][This Pharoh Cooper Scouting Report, with a Vikings slant, has been provided to Vikings Territory by Draft Season. Be sure to check back for more and also be sure to visit Draft Season to quench your NFL Draft thirst. All previously published scouting reports can be found by clicking here.]

Versatile weapon. Cooper can hurt a team lining up at receiver, in the backfield, or as a return man. He is a true jack of all trades.

Good after the catch. Shows good moves and awareness with the ball in his hands.

Reliable hands. Cooper shows strong hands and can pluck the ball out of the air with relative ease.

Fast. Cooper has good top end speed, and solid burst. He reaches his peak speed in a hurry.

Is also a good return man. If Cooper is slow to adjust to the NFL, teams can use him as a kick returner and still get some early return on their investment.[/vc_column_text][/vc_column][vc_column width=”1/2″][vc_column_text]

Height. Ideally, NFL teams like a little more height in wide receivers. Fair or not, this will cause him to slide down some draft boards.

Wasn’t asked to run many different routes in college. Cooper ran some slant and go routes, but nothing more complex than that. He will need some time developing his route tree early in his NFL career.

Utilization. Some teams may not know how a guy with Cooper’s talents can fit into their offensive game plan or may be unwilling to make the necessary adjustments needed for a seamless transition to the NFL.[/vc_column_text][/vc_column][/vc_row][vc_row][vc_column][vc_column_text css=”.vc_custom_1458196625267{padding-top: 15px !important;background-color: #dbdbdb !important;}”]

Wide receiver is arguably the Vikings top need after their early free agency moves. They definitely need some more weapons for Teddy Bridgewater as the Vikings passing game certainly left something to be desired in 2015. The Vikings may desire a receiver with more size and a bigger catch radius than what Cooper can offer. However, the Vikings would be foolish to overlook him.

Cooper is a poor man’s Percy Harvin – and, headache or not, every Viking fan knows what kind of weapon Harvin was. Cooper can be used in a similar way and has the talent to generate a ton of big plays. He can also be used as a return man if things do not pan out with Cordarrelle Patterson. If Cooper is on the board in round three and the Vikings still haven’t taken a receiver, he should definitely be on their short list.[/vc_column_text][vc_column_text]