Quote of the Week: Gambling on Jaylon Smith 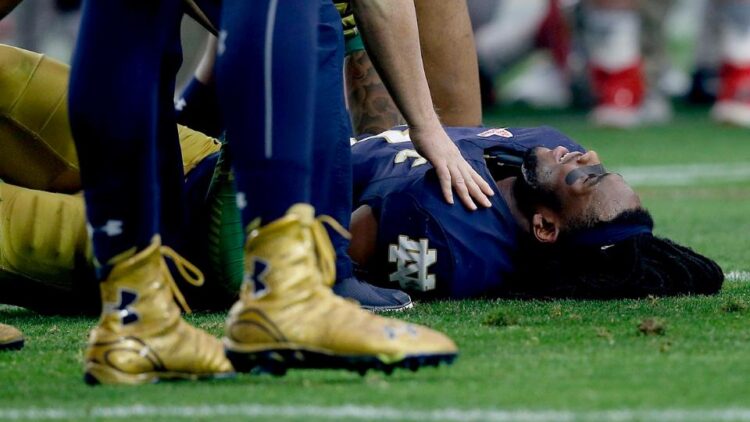 The War Room is a lot like the Roulette table at a casino. Minnesota Vikings general manager Rick Spielman has all of the power to place his chips where he pleases, but he’s not guaranteed to hit on any of those black and red numbers. If chips are draft picks and the table numbers are prospects, then Notre Dame linebacker Jaylon Smith is the riskiest bet Spielman can make in the 2016 NFL Draft.

Widely considered the draft’s safest prospect during the 2015 college football season, Smith was a near-lock to come off the board within the first five picks of the first round. But a terrifying knee injury ended both his junior season and collegiate career with the Fighting Irish. Smith disappeared from the national spotlight to rehabilitate his knee, making a brief appearance on social media before this year’s Scouting Combine.

Amazing walking without the knee brace six days after being restricted for six weeks and feels fantastic! pic.twitter.com/dAW8OW09Ke

The video sent Smith’s draft stock plummeting, with some fearing the nerve damage in his knee and ankle was enough to keep Smith off the field until 2017. At the time, the situation appeared dire for the star linebacker, but Smith is slowly creeping his way back into the first-round conversation. According to Charlie Campbell at Walter Football, a handful of teams are willing to take a chance on Smith, with the hopes that he’ll make a full recovery by the middle of 2016:

[quote_box_center]Two playoff teams say that Notre Dame linebacker Jaylon Smith is in play for their first-round pick if his medical recheck goes well. If they feel that Smith’s going to miss limited time and not suffer long-term effects of his knee injury, Smith will get heavy consideration on Thursday night. They feel that they would land a top-five talent at a massive discount and they have the strong roster to stash him for half a season, or his entire rookie year, with the payoff coming in 2017 of a player they shouldn’t have been able to land. Keep an eye on the Chiefs, Packers, Texans, Bengals, and Vikings.[/quote_box_center]

Campbell lists the Vikings as one of the potential risk-taking teams, and it’s a scenario that isn’t totally out of the question. My first mock draft had Rick Spielman selecting Smith with the 23rd-overall selection, and that was before the knee injury on New Year’s Day. Today, Smith is working his way back to full strength, and the possibility remains that he could suit up at some point in 2016. While it’s unlikely, the Vikings are one of the more progressive franchises in the league when it comes to drafting high-risk/high-reward medical fliers. Although they’ve only made such moves at the end of drafts, Smith is on another level, both talent and fit-wise.

With Chad Greenway set to return for a final season and Emmanuel Lamur waiting in the wings, there isn’t much room at the position for Smith. But right now, with a long recovery ahead, there’s no rush for Smith to step in right away. Drafting and stashing Smith would give the Vikings a top prospect, regardless of the year or competition at the position. He’s a player who would be ranked highly in any of the past few drafts because he’s just that talented. And, the Vikings are in a place where they don’t have to draft for current needs — they can plan for the future by drafting a player who will contribute in a year or two.

Smith’s college production and NFL potential would’ve made him a top-10 pick had he not injured his knee. It’s that same production and potential, regardless of his questionable health, that makes him such a polarizing prospect in this draft class. Vikings head coach Mike Zimmer covets athletic defenders, and Smith fits the bill. If the team doesn’t love a wide receiver at No. 23 and Smith is still available, I wouldn’t be shocked to see Spielman put all of his first round chips on the table for the Notre Dame star.