Shuffling the Top of the Vikings’ Depth Chart 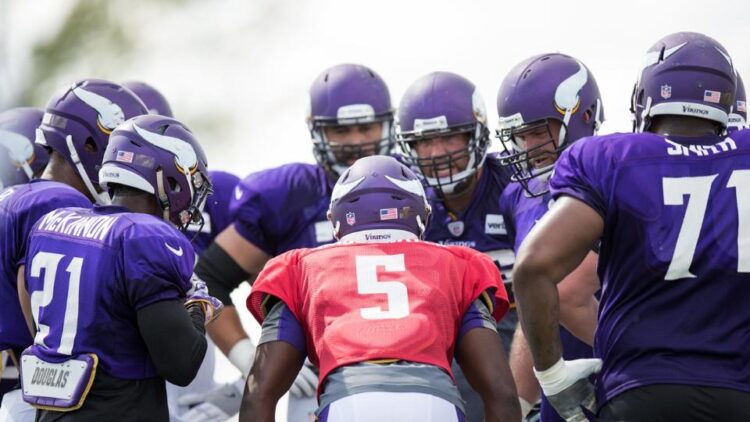 In the NFL, or the “Not For Long” league, change is imminent. Even for tenured starters, there comes a time when change must happen. Exorbitant contracts are the enemy of the front office. Father Time waits for no one. Rookies and free agents step in, ripping starting spots from those at the top of the depth chart.

It’s a cruel reality, and it’s no less cruel for the Minnesota Vikings. The team will take the field for its first preseason game on Friday night, where today’s starters may only see a handful of snaps. Tomorrow’s potential starters, however, will enjoy an extended amount of time under the lights.

These next four weeks will be crucial in the development of a final 53-man roster. Although the Vikings released a preseason depth chart earlier this week, that list is sure to change. Starters at the top may end up on the bench, and reserves may leap-frog their way into the starting rotation. With that in mind, the Vikings Territory team is back to predict how the top of the Vikings’ depth chart will change by the start of the regular season.

Which starter on the preseason depth chart won’t be a starter come Week 1?

The aging veteran has continued to deter regression through 2015, and it is possible this continues in 2016, but it is entirely possible that his experience and leadership traits are most valuable before the season begins.

The Vikings have an abundance of young talent at the cornerback position (I can’t believe I’ve lived long enough to write that sentence) and training camp presents the perfect opportunity for one or more of those players to not only “make the leap” but to actually earn a starting job by beating out one of the league’s most respected defenders in Newman.

It takes time to become a dependable NFL cornerback, but if Trae Waynes or Mackensie Alexander can prove themselves worthy in the eyes of Mike Zimmer, then Newman might slide down the depth chart… or back onto the free agent market outright. Newman’s one year deal carries a cap hit of $3 million, a per game bonus of $15,625, and would only result in $1 million of dead space should the team release him prematurely.

With only nine receptions for 127 yards, Charles Johnson was a ghost during the 2015 season. We’ve been led to believe that this was due to a nagging rib injury that plagued the young standout from 2014. That may be true, and now, all signs are pointing to Johnson being back to full health and ready to go this year. However, there’s a part of me that believes he will not be able to hold on to that starting position long and will be ultimately be moved back for rookie Laquon Treadwell.

Treadwell has been very impressive in camp so far. He’s shown a great work ethic, a rapport with Teddy Bridgewater and he’s proven he’s able to do the things the Vikings brought him in for – make contested catches and high point balls down field. Other Vikings wide receivers have had impressive camps, too. Cordarrelle Patterson is seemingly taking strides and working his way back into the good graces of the coaches and fans. Adam Thielen is grinding as hard as ever.

At the end of the day, I’m just not confident that Johnson isn’t supplanted by one of this teammates before the season begins.

A healthy John Sullivan began the process of reclaiming his starting center position during OTAs. After two back surgeries and missing the entire 2015 season, he took part in his first padded practice on Sunday as the starting center.

By Monday Joe Berger was rotating in with the number one unit. Berger performed well in Sully’s absence and has also looked better against Linval Joseph so far in camp. The rotation will probably continue for a few more days, but I think Berger will emerge on top.

They say you can’t lose your starting job because of an injury, so, technically, that makes the job Sullivan’s to lose at this point.

Today’s practice brought some interesting developments at the safety position. Both Michael Griffin and Jayron Kearse made notable plays to break up passes. As most Viking fans know, making plays has been Sendejo’s weakness, even when he’s in good position. I think the Vikings can take a risk here and take a chance on a safety who can make big plays in the secondary. Mike Zimmer spoke to the desire to produce more turnovers defensively in 2016, and this might be an opportunity to do so.

Other than Laquon Treadwell, who won’t be ready to start Week 1, Johnson is the only true split end on the roster, which is why I think the Vikings have him slotted as a starter currently—he plays the physical, on-the-line-of scrimmage role generally reserved for big, strong receivers. Still, Johnson was the ONLY player who fit the split end role on last year’s roster, and that didn’t stop the team from shelving him for most of the year, including basically all of the second half.

The long-term plan is obviously to have Treadwell play the split end role, and I believe throughout camp the coaches were essentially having Johnson keep the spot warm until the first-round pick is ready, in order to install their ideal offense. Once the bullets are live, however, things will be different; they’ll put the best receivers on the field, regardless of positional semantics, just as they did in 2015. My bet is that will be either Thielen, Patterson, or Wright—or heck, even Treadwell—before it’s Johnson.

This is supposed to be Greenway’s last hurrah in the NFL, but his stage time could be cut short once the coaches realize the playmaking abilities possessed by some of his backups. The decision could come before the start of the regular season or during it. Greenway struggled in a starting role last year and the Vikings do not have another year to wait around for a linebacker who cannot cover today’s crop of receivers. He can still be a tremendous leader for this team in 2016, however that role would be best if it were played from the sidelines.

Like Laquon Treadwell this year, the Vikings took things slow with Trae Waynes in 2015. He’s had an offseason to prepare, a full season to learn from Terence Newman, and another training camp to prove he’s ready to become the team’s starting left cornerback. Now is the time, no matter if Waynes has reached his potential or still needs fine-tuning. Reports from camp have been positive, and Newman’s most recent injury has opened the door for Waynes to step in now.