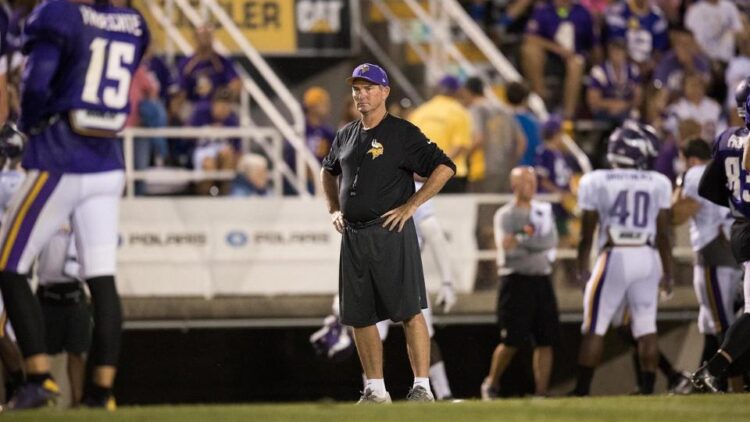 Training Camp for the Minnesota Vikings hasn’t been all that exciting this year. Save for a few one-handed catches from Stefon Diggs and some specular deep shots from Teddy Bridgewater, much remains the same in Mankato. Roster turnover isn’t an issue for the team, free agent acquisitions are performing as advertised, and trust in the organization is at an all-time high.

There’s plenty to be certain about in Minnesota; the strength of the defense, Adrian Peterson’s rushing ability, and Blair Walsh’s renewed confidence. Uncertainty, in a sense, isn’t necessarily a bad thing. The Vikings have so much young talent that difficult depth chart decisions won’t make or break the team’s season.

In Minnesota, the front office isn’t asking, “Who’s our quarterback;” they’re debating the hierarchy of a loaded roster. And no matter the final decision, the result will be a 53-man roster with more potential than any Vikings team since 2009.

This morning during walkthroughs, head coach Mike Zimmer gave the media a sneak preview of the team’s ‘Cincinnati’ depth chart. It’s the first unofficial roster of the 2016 preseason and reveals exactly where the Vikings stand after two weeks in Mankato.

The surprises begin at wide receiver, where Cordarrelle Patterson and Adam Thielen are listed ahead of Jarius Wright*. With Stefon Diggs getting more time at Wright’s natural slot position, the veteran of the group could see less playing time in 2016. Reports out of camp indicate a smaller role for Wright, who’s even seen Thielen with the first-team offense in three-receiver sets.

*A quick note — this depth chart does not list a dedicated slot receiver position, which somewhat explains Wright’s perceived fall.*

Elsewhere, everything plays out as expected, with Charles Johnson notching ahead of Laquon Treadwell at the other receiver position. He’s had the stronger camp of the two, and the Vikings appear comfortable easing their rookie into the NFL.

Along the offensive line, the battle at center is far from over. Earlier this morning, Joe Berger took-first team reps, but remains behind John Sullivan on the depth chart. The rest of the offensive line, as is, could very well be the unit that suits up in Week 1.

Mike Zimmer’s defense remains relatively the same, even with injuries at a number of key positions. Along the defensive line, Brian Robison, Everson Griffen, Linval Joseph, and Sharrif Floyd are the clear-cut starters.

Despite a quiet camp — and lingering injury — Floyd is the presumed starter at defensive tackle and a valuable asset when healthy. The team may seem some changes if Danielle Hunter pushes Robison for playing time, as this depth chart doesn’t reflect Zimmer’s multiple personnel groupings.

Chad Greenway is still the team’s starting weak side linebacker, but faces real competition from Emmanuel Lamur. The free agent acquisition is rotating with the first team during training camp and offers more, especially in coverage, than Greenway does at this point in his career.

Speaking of coverage, the secondary remains relatively unchanged. However, subtle adjustments reveal a glimpse into the future hierarchy of Zimmer’s defensive backs. Behind Harrison Smith, Anthony Harris has leap-frogged Antone Exum Jr. as the team’s second free safety. And behind Terence Newman, Trae Waynes is pushing to start. His strong camp, combined with a right ankle injury to Newman, could pave the way for Waynes to start very, very soon.

The punter competition that so many had hoped for never materialized, making Jeff Locke the only candidate to start for the Vikings. He’s joined by Blair Walsh and Kevin McDermott, who were in no danger of losing their staring duties.

Behind returners Cordarrelle Patterson and Marcus Sherels, Troy Stoudermire is fighting for a roster spot. He won’t make the team as a receiver, but his prowess as a return man may warrant a place on the final 53-man depth chart.