A Prescription for the Vikings’ Offensive Line 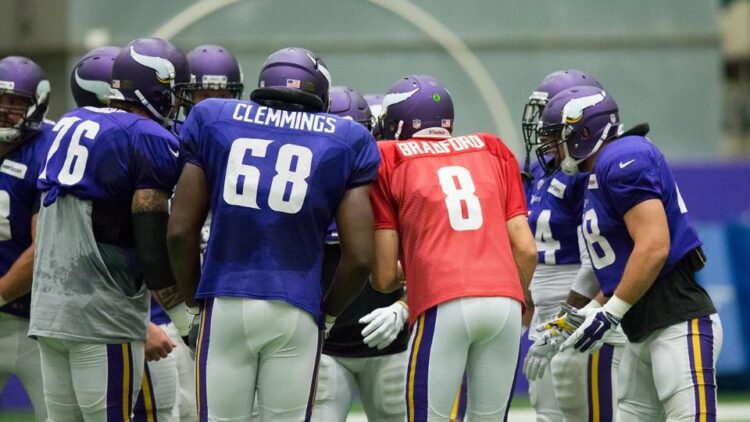 The luster of an undefeated record masks the blemishes below the surface. For the Minnesota Vikings, that blemish is the offensive line. Through two games this season, the unit is Pro Football Focus’s 31st-ranked group and has struggled in every facet of play.

With Matt Kalil likely out for the season and T.J. Clemmings moving to left tackle, the prospects aren’t any better. Such overturn — and a sudden lack of depth — means offensive coordinator Norv Turner will have to adjust Minnesota’s scheme to compensate.

Shorter drops, shotgun looks, and a quick-hitting passing game could become the norm for the Vikings, who relied so heavily on a ground-and-pound attack in 2015. Even with those changes, there’s no guarantee the line improves. Right now, there’s no knowing how they can improve.

It’s the worry of every fan, and it’s the focus of this week’s Vikings Territory “Question of the Week:”

“What do you think is wrong with the OL, and how can it be fixed?”

There is no blockbuster trade Rick Spielman can make. There is no free agent stud that they can bring in. There is no single guy that can be brought in to fix the issues on this line. The hope/pray option is that continuity breeds chemistry which becomes competency (hopefully helped along by Coach Sparano).

Combined with facing less dangerous defenses after the bye, hoping and praying for improvement from our existing unit is about the best we fans can hope for at this point.

What do I think is wrong? A lack of talent in the midst of a league-wide talent shortage at those positions.

It is that simple. No magic formula and no magic fix. Sorry, everyone.

I started pondering this question before Matt Kalil went on Injured Reserve, and at that point, it was tough to come up with an answer. Now, it seems borderline impossible.

There are no magic bullets to fix this one. One thing I know is that offensive lines improve with cohesion, i.e. the same players starting in the same places, week after week. Talent is important, yes, but only if the individual talents on the line work as a unit (because that’s what an offensive line is). Tony Sparano is a respected offensive mind, and seems to be a better option than most to be tasked with fixing this mess up front.

My HOPE is that—even with the injuries—as the offensive line continues to play together and get more comfortable with one another (aided by guidance from Sparano), we will see improvement throughout the season. I’m not expecting wholesale change, but subtle improvements from now until Week 17 would be encouraging.

The second part is that you simply need to address it through the draft, ideally with high draft picks. I appreciate the Vikings’ aggressiveness in free-agency, but those additions feel more like plug-and-play options for revamping the O-line—something that does nothing for cohesion, and hasn’t worked out terribly well through an admittedly limited sample size so far in 2016. By investing in smart, solid draft picks in the early rounds, you can (hopefully) begin hitting on more of your offensive line prospects than the Vikings have recently, and ease them into action without disrupting the unit as a whole.

It’s a simplified answer to a very complicated question, and nothing will happen overnight. We have to face the prospect that the offensive line will be subpar for the foreseeable future. But in order to avoid the same predicament going forward, the Vikings need to take a steady, long-term approach.

The offensive line’s early struggles this year may be due to their lack of playing time together before the start of the season. The five players who started in the Vikings’ first two games never played as a group in any of their four preseason games this year.

It could just be a matter of working out the kinks and each learning the habits of their teammates. It may get a little harder now with the loss of Matt Kalil. But then again, it may actually get better.

In Week 1 at Tennessee, 70% of the Vikings’ run game came out of 12/21/13/22 personnel, which led the Titans to align 8-plus in the box with one or both safeties down to account for the extra gaps created by the tight end and fullback. With safety help, linebackers can become “fast flow” players who scrape over the top when they read run flow away and help play-side defenders who work to box the ball back inside.

Fast flow players make it tough, particularly in our zone blocking schemes, for combination blocks to reach the second level in time. In addition, there was a concerning lack of vertical push we were getting on the initial double-team — fixing this would help solve some problems, as a linebacker can’t scrape with a defensive lineman in his lap.

Last week vs. Green Bay, the tendency evened out with around 50% of Vikings run plays coming out of 11, which helped back the safeties up, but also created more 1-on-1 matchups in the interior, which we were not winning.

Again, in zone schemes, the back is taught to read the first down lineman past the play-side guard to determine whether to keep it play-side or cut back-side. When our guards are getting put on roller blades (Fusco) or getting push-pulled and shed (Boone), it creates a murky read for the back and causes hesitation in the backfield. Our run blockers (tight end/fullback included), must work to create more vertical and lateral push, whether in a 1-on-1 scenario or working a combination (scoop/separation) block to the second level.

I believe our problems here are not as concerning as our problems running the football. They’re caused by technique and execution, not the pass protection scheme.

The Packers wrote the book Sunday night on how to rush the Vikings offensive line — set up everything with a physical bull rush. Multiple times, we saw Kalil, Smith, and Fusco getting out-leveraged and out-“physicaled” with aggressive bull rushes from Perry, Matthews, and Daniels, among others. This later set up counter-moves like “bull-and-pulls” in the interior, and fake bull speed rushes on the outside.

Individually, I think there are many techniques each Vikings lineman could improve upon – pad level and anchoring weight (Fusco), not playing with weight over their toes (Boone/Smith), keeping hips horizontal to the line of scrimmage until you can wash (Smith), being patient with their punch and not “hanging their hands” (Smith/Kalil), and not scanning for work too early when uncovered (Fusco).

Regardless if we keep backs in the protection, or have them chip and release, there will still be 1-on-1 matchups somewhere, and we have to improve in those situations with two of the best pass rushing teams in the league coming up in the next three weeks.