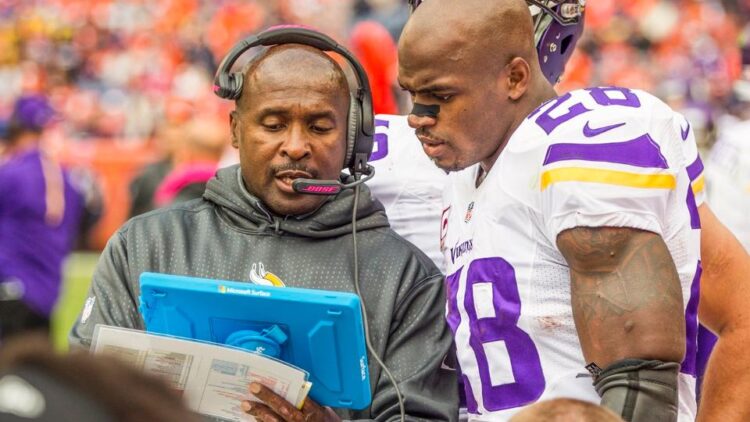 “Should the Vikings trade Adrian Peterson?”

If you identify as a Vikings fan, then the odds are good that you’ve been asked this question more times than you can count over the ups and downs of the last four seasons, give or take. I know I have.

The problem, however, is that most people asking that question are looking for you to answer in a concrete way. They want a “yes” or “no” answer that they can either agree with or scoff at. They want you to enable their ability to hit that “like” button or give you the old “thumbs down.” They are not looking for a thoughtful, nuanced answer. Ambiguity beyond a “for the right price” qualifier simply won’t be tolerated.

The problem, however, is that the answer to this particular question is so complex that a simple “yes” or “no” isn’t giving it the thought it deserves, and neither of those answers could possibly be concrete and true.

For the first time in his career, however, I am not at all hesitant in saying that the Minnesota Vikings should absolutely consider trading Adrian Peterson.

If you normally find yourself in the “no” crowd, then one of the first ways to argue against a trade is to express shock over the notion that a team could actually improve by trading away the NFL’s leading rusher.

I understand the argument, and there is no denying Peterson his crown for the 2015 season, but I just don’t see this year’s award as being much more than a durability contest. By that, I mean that Jamaal Charles or Le’Veon Bell or Todd Gurley surely would have changed the landscape of the stats tables had they played 16 games this year.

Peterson finished tied 11th among qualifying running backs with an average of 4.5 yards per rushing attempt. Ahead of Peterson were the likes of Darren McFadden and Giovani Bernard.

Peterson is a 30 year-old running back with run-of-the-mill abilities as a pass blocker and receiving back. Also, his chronic fumbling issues have been resurrected in an excruciatingly painful manner.

That isn’t an attempt to diminish everything Peterson has done throughout his Vikings career, however, or even what he accomplished in 2015. He is a future Hall of Fame running back that is once again playing at a high level.

The title of “Leading Rusher” proves that Rick Spielman’s double-down approach to Peterson’s publicly dramatic situation last offseason was the correct move. Not only did Spielman get Peterson to return to Minnesota football for another great season, but he was able to raise the veteran’s value in the process by letting him hit the field in purple. Despite all of the trade talk last offseason, it simply wouldn’t have made much sense for the Vikings to cut bait on their biggest investment when it was at an all-time low in terms of value.

That isn’t to say I’m fully planted in the “yes” crowd, however.

Peterson is a great player. He might be a bit one-dimensional these days, but those that contend he actually makes Teddy Bridgewater and the Vikings worse are absurd. Snaps and touches are only a concern when a team is piling up losses, and it is the job of the coaching staff to ensure the players are being used in ways that keep the wins coming.

I refuse to subscribe to the idea that there can be “too much talent” on the field at one time. I won’t ever pretend like that is some sort of hindrance. In my mind, if Teddy Bridgewater and Adrian Peterson are having troubles coexisting within the Vikings offense, then that is squarely on the shoulders of Norv Turner (and that putrid offensive line).

I think Peterson easily has another solid year or two left in him, and the Vikings could certainly do worse than keeping him on the roster for awhile. The old NFL cliché that “it is better to get rid of a player a year too early than a year too late” applies to this situation, however, and it is highly likely that Peterson’s value on the trade market will never again be as high as it is right now. Decline is inevitable and approaches quickly.

Peterson signed a new contract last offseason that amounted to three years and a total of $42 million. Next year, he has a manageable and attractive cap hit of $11 million, but that number spikes to $18 million in 2017. Even with another great rushing campaign in 2016, Peterson will become nearly unmovable in 2017, as giving up picks to take on an $18 million cap hit for a 32 year-old running back would be borderline crazy for any NFL general manager.

Adrian Peterson still has value on the field, no doubt. The Vikings may find themselves in a position this offseason to compare his value to the value of trade offers sent over by other teams. Evaluating and comparing those two values is not an easy task, but that is why Rick Spielman makes the big bucks.

In my opinion, Spielman would be absolutely crazy not to at least entertain the idea of trading Peterson in advance of the 2016 season. If the offer has some teeth to it, then I promise I won’t be on here complaining that the Vikings shipped out one of my all time favorite Vikings players.

So, what do you all say, Vikings fans?

Should The Vikings Trade Adrian Peterson?