For Patterson to Succeed, It’s on Zimmer 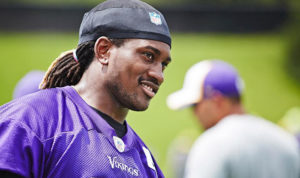 A few months ago I wrote a quick post about Cordarrelle Patterson. It was about his offseason conditioning, how he was again working out with a man dubbed “Hell’s Trainer” in California. Not an extremely engaging story, since it’s well accepted that Patterson’s inability to get on the field the past two seasons has had much more to do with mental factors than physical ones, but the post sparked an interesting discussion in the comments section. These points that arose have stuck with me, and made me ponder the situation more than I have in the past.

Mandatory disclaimer: I understand the Patterson criticisms. Many of the negative things said and written about his attitude, grasp of the offense, and work ethic have been justified, and I’m certain the coaching staff has at least somewhat legitimate reasons for keeping him off the field. He hasn’t developed as a player—as a receiver—the way they would have liked him to. At times, he has been downright selfish.

Watch this. Take five minutes, watch this whole highlight package from start to finish, and be reminded of the things Cordarrelle Patterson did as a rookie in the NFL. (However I do recommend turning down the music, as it is awful.)

In those highlights, do we see a refined positional player? No. What we do see, though, is an explosive, dynamic, supremely gifted playmaker. To me, there should be a spot for such a player on an NFL football field.

There’s an old anecdote about a frog in boiling water. The story goes, if you drop a frog in a pot that’s already boiling, it’ll jump out. But if you put a frog in cold water and gradually raise the temperature, it will remain in the pot until it eventually boils to death. The scientific validity of this claim is flimsy, but it makes an interesting psychological metaphor; if a great and irrational change happens immediately, we’re likely to reject it and point out its absurdities. But if the same change happens gradually, over years, we might just accept it without question.

This anecdote, I think, is applicable to the Patterson situation. If you were to say after the 2013 season (Patterson’s rookie year), that in 2015 he would have his workload reduced to virtual nonexistence, and not because of injury or other external factors, but because of…something about route running, I would have told you to see a neurologist. But because the same thing transpired over two years, and we’ve been slowly inundated with partial quotes from the coaching staff about his work ethic and consistency, we’ve allowed ourselves to build a conventional wisdom about Patterson—essentially, that he doesn’t deserve any snaps until he forces himself into the exact box the coaches are asking of him—and turn a blind eye to the insanity of the situation.

Take a look at Patterson’s season stats in the three years he’s been in the league:

The rookie numbers stick out; 45 receptions, over 600 yards of total offense, and seven offensive touchdowns, for a player who was almost certainly considerably more raw and unrefined at that point than he is now, three seasons into his career. Even more jarring is the fact that Patterson put up those rookie numbers under the tutelage of Leslie Frazier and offensive coordinator Bill Musgrave—serviceable coaches, perhaps, but neither could be considered an offensive savant. But in two years under the Zimmer/Tuner combo—a duo that’s inarguably more respected and, in Turner’s case, more offensively accomplished—Patterson’s offensive contributions have shrunken to essentially nothing. That Musgrave can get this kind of production out of Cordarelle Patterson, and find ways to get the ball in his hands in space, and Zimmer/Turner can’t (or won’t) is baffling to me, and indicative of a bigger story than just route running.

We love Mike Zimmer. He’s brought a tough, no-nonsense attitude to this team, molded the defense into one of the better units in the NFL, and hopefully positioned the squad to compete for NFC North titles for years to come. But no one is without fault, and I believe Zimmer has handled the Patterson situation poorly. Yes, I understand when a player doesn’t do what you ask, there needs to be a consequence. But Zimmer’s punishment of Patterson—for whatever the reasons are—is bordering on vindictive, and has become detrimental to the team. Detrimental because it’s harmful the team, not helpful, to leave such a dynamic offensive weapon on the sidelines. It’s irresponsible. At some point, you need to accept a player for what he is—warts and all—and find a way to use him to help the team. Not let emotion drive you to banish him to the bench. And we know, I think, what Cordarelle Patterson is as a player: a dynamite kick returner, and an explosive athlete with unrefined receiving skills and an undefined position on offense.

Bill Belichick has made a career out of acquiring players who have obvious holes in their games, but can do one or two things very well, then masking those deficiencies and putting the players in position to utilize their strengths. Belichick focuses on what a player can do, not what he can’t. Zimmer is caught up in what Patterson can’t do, which is a shame, because Belichick or someone else will surely find a way to get him on the field and take advantage of his playmaking after he leaves the Vikings.

So, as the Cordarrelle Patterson experiment in Minnesota marches toward its inevitable swan song, if there is to be any contribution by Patterson on offense, it’s on Mike Zimmer to make it happen. Zimmer, not Turner or Shurmur or Stewart, because Zimmer is in charge, and Zimmer calls the shots. If Zimmer says to find a way to use Patterson, the offensive staff will do so. If he says to leave him on the bench, they will, and they have. It’s on Zimmer now to realize he has a player on his roster that, while imperfect, unpolished and unorthodox in his skill set, can make plays with the ball in his hands that most players in the league cannot. And by finding a way to get the ball in those hands, he will be helping the Vikings’ quest for another North title and beyond, not hurting it.

Maybe Patterson is a running back. Maybe he’s strictly a quick screen, catch-and-run guy. Maybe he’s mostly a decoy. I don’t know. But he has to be on the field. He saw 58 offensive snaps in 2015. That’s 5.7% of the team’s total. That’s insane. I like Jarius Wright and Adam Thielen as much as the next guy, and both have earned their places on the roster to this point. But the fact that Patterson consistently can’t get on the field over either of them is indicative of something more than just skill. Many things, probably, and most of which fall on Patterson’s shoulders. But not all of them.

Watch the highlights. Look at the stats in Musgrave’s system. Clearly there’s something Patterson can contribute to this year’s Vikings. Let him out of the timeout, Zim, and let Flash do his thing.