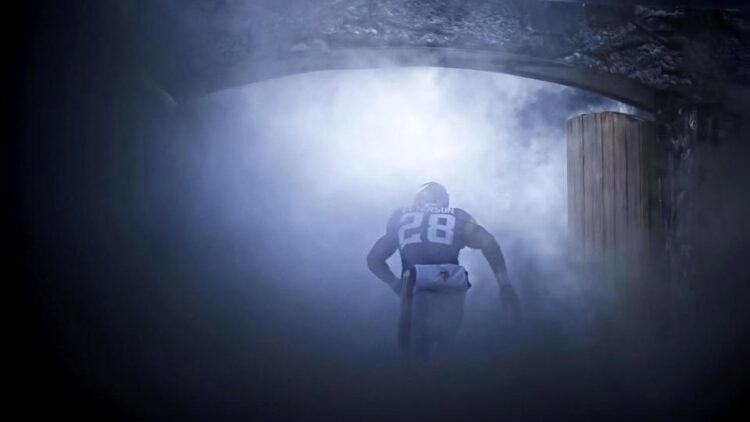 Vikings Territory asked, and the readers spoke; in this series of articles, the team will announce the winners of our fan-voted awards, from the Minnesota Vikings’ MVP of 2015 to the Defensive Player of the Year. Today, a look at the dual-winner of  VT’s final two awards.

Adrian Peterson is the Minnesota Vikings’ most productive offensive weapon, but also their most divisive. It’s his style of running that makes it so easy to love and hate Peterson at the same time. One play, he’ll lose yards after a few too many jump cuts. And the next, he’ll burst through the line of scrimmage for an 80-yard touchdown run.

It’s the same story on a game-to-game, and even season-to-season basis. Against the San Francisco 49ers in Week 1 this year, he looked indecisive, rushing for 31 yards on 10 carries. The very next week, at home versus the Detoit Lions, he eclipsed 130 yards and looked like the Peterson of old. Well, Peterson pre-2014, when he missed 15 games while serving a league-mandated suspension stemming from child abuse charges.

Peterson is the king of the comeback, with a history of ups-and-downs that span his entire nine-year career. Last season’s rushing title came after a year off from football, and his 2012 MVP Award represented a miraculous recovery from the ACL tear he suffered the season before. Few expected he’d win the rushing title at 30 years-old, but Peterson’s proven time and time again that expectations mean little for him on the football field.

Whether you like Peterson or want him traded from the team, there’s no doubt he was the fulcrum of Norv Turner’s offense. The running back led the league in carries, rushing yards, rushing yards per game, and rushing touchdowns this season in a scheme built around his transcendent talents. As Thomas Bassinger pointed out on Twitter this week, the Vikings led the league in rushing play percentage on first down; Turner planned to get the ball in Peterson’s hands and in his hands early.

The plan worked, as Peterson’s 1,485 rushing yards were the third highest total of his career. He was consistently dominant stat-wise, but also hurt the team in an all-too-familiar fashion; fumbles.

Over the course of his career, Peterson’s fumbled the football 38 times (4.2 times per season). That unforgiving mark gives Peterson the second-most fumbles among active running backs, and one of his seven in 2015 couldn’t have come at a worse time. In the fourth quarter of the Vikings’ playoff game against the Seattle Seahawks, Peterson caught a pass and turned upfield, only to have the ball stripped away while fighting for extra yards. The Seahawks turned his fumble into points, kicking the ultimate game-winning field goal to go up 10-9.

Readers and fans recognize the greatness of Peterson. He’s a lock to make the Hall of Fame when his career is over, and he’s the catalyst that drove Minnesota’ offensive machine in 2015. But in 2016 and beyond, Peterson may not play as integral a role behind Teddy Bridgewater. It’s a problem Mike Zimmer and his coaching staff will need to solve this offseason; can Bridgewater and Peterson coexist, or does the offense need to run Peterson into the ground?

Right now, the “Peterson Problem” is a good one to have. Congratulations, Adrian.