Vikings Inch Closer to New Headquarters with Purchase of Land 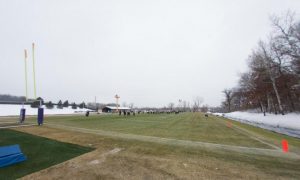 Earlier today the Vikings announced that they have officially purchased land in Eagan, Minnesota. The land consists of 185 acres and is thought to be where the franchise’s next corporate headquarters will be located.

Along with a new headquarters, the new land could also mean the site of a brand new practice facility and eventually the new home for the team’s training camp. With a brand new stadium set to open later this year, an update to the rest of their facilities would not come as a surprise.

New facilities and a new stadium could make potential free agents forget about the sub-zero Minnesota temperatures and become a member of the Vikings. The Wilfs may have made Minnesota general manager Rick Spielman’s job a whole lot easier.