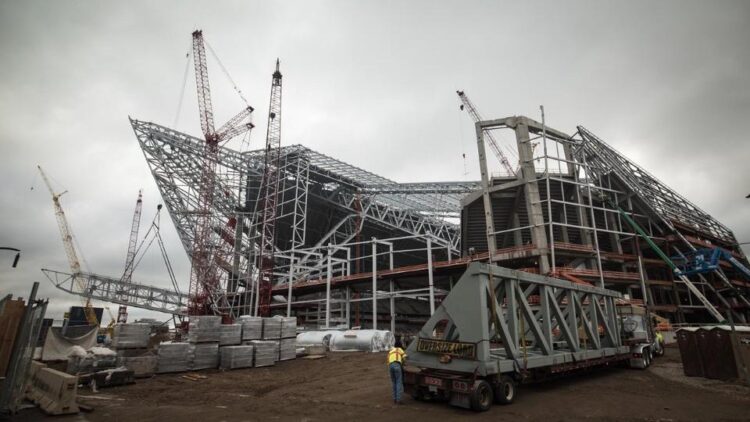 According to reports from the Star Tribune’s Rochelle Olson, the Minnesota Vikings’ owners have signed a purchase agreement for 185 acres in Eagan, Minnesota.  The land could potentially move the team’s corporate headquarters and practice facility from their current home of Winter Park in Eden Prairie.

The Vikings opened Winter Park 34 years ago, and the facility is beginning to show its age. In a May article for the Tribune, Olson described the team’s current offices and practice facilities as “lagging by NFL standards,” specifically pointing to a “dearth of meeting places for executives and players” and coaches’ offices that are “squat, claustrophobic cubbies with little space for much more than a desk.”

For a team with a new stadium opening in less than a year, it’s only fitting that officials begin to identify and develop headquarters that will match the grandeur of their new Sunday home. Shortly after Olson’s story broke, the Vikings released an official statement on the purchase:

[quote_box_center]“As we have previously discussed, the existing Winter Park training facility poses space and flexibility challenges for the Vikings as we continue to grow and evolve,” said Vikings Chief Operating Officer Kevin Warren. “While we are evaluating a variety of options to accommodate the long-term needs of our football team and the organization at-large, this property is intriguing for several reasons. Not only does this location have tremendous space and flexibility for future growth, but it also offers proximity to both Minneapolis and St. Paul downtowns, as well as the airport. With this agreement in place, we now have an opportunity to perform a thorough evaluation of the site. We continue to appreciate our strong relationship with the community of Eden Prairie and the positive environment the city’s leadership has created over the past 30-plus years.”[/quote_box_center]

Minnesota Vikings vice president Lester Bagley expanded on Warren’s comments on Friday, per Olson. “The [current] Winter Park site is very challenging,” he said. “There’s not enough flexibility for what we want to do.” Currently, Winter Park sits on 12 acres of land off of Interstate 494, and is in desperate need of “more outdoor playing fields, better weight rooms, media rooms, locker rooms, and more office space.”

The newly-acquired 185 acres provide ample room to expand upon the Vikings’ current setup, which includes two outdoor practice fields, one indoor practice field, a renovated weight room, and a number of small office buildings. It also provides an opportunity to bring the team closer to downtown Minneapolis and the Twin Cities’ many attractions, including Minneapolis International Airport and the Mall of America.

No timetable has been set for development or relocation, but the Vikings will use this period to evaluate the site and consider every option before declaring Eagan their new headquarters.