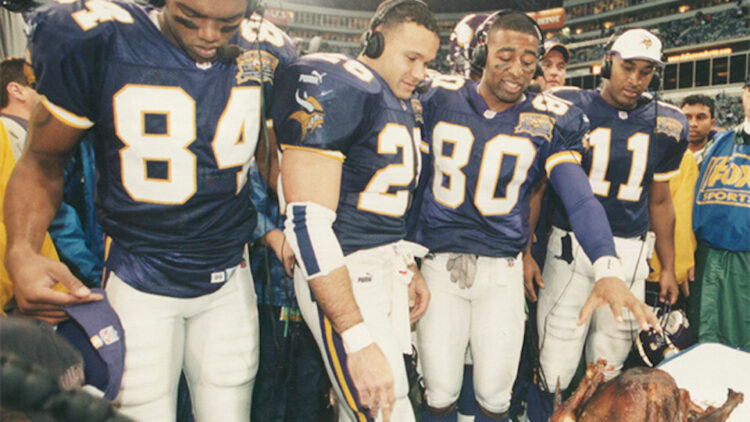 The NFL’s slate of games won’t be released for another two months, but schedule-makers are already planning an exciting Thanksgiving for Minnesota Vikings fans. According to a report from the Sports Business Journal, the Vikings are “likely” to play the Detroit Lions on Turkey Day.

Minnesota hasn’t played on Thanksgiving since 2000, when they defeated the Dallas Cowboys 27-15. The Vikings are 5-1 all-time in Thanksgiving Day games, with both of their most recent victories coming against the Cowboys. In 1998, Randy Moss famously caught three passes, all of which resulted in touchdowns. That dominating team would go on to win the game 46-36 and finish the season 15-1.

Below, a look at the results from each of Minnesota’s Turkey Day games, per the team’s official website:

Historically, the Vikings have fared well against the Lions on Thanksgiving. Although their lone loss came at the hands of Detroit in 1995, they’ve outscored the Lions 88 to 44 in three total games.

Last season, the Vikings swept the divisional series, beating the Lions in Week 2 and Week 7. Adrian Peterson notched his first 100-yard games of the season in the first matchup, and Mike Zimmer’s defense racked up seven sacks on Matthew Stafford five weeks later.

The report states that two of the teams that play on November 24 are likely to appear on “Thursday Night Football” the following week. Detroit was one of those teams last season, having hosted the Green Bay Packers in the “Rodgers-to-Rodgers” Hail Mary game a week after defeating the Philadelphia Eagles on Thanksgiving.

After winning two straight primetime games to close out the 2015 season, the Vikings have thrust themselves into national media discussion. Despite the heartbreaking end to their playoff run last year, Minnesota is built for long-term success and should enjoy another successful campaign in 2016. They’ll have the chance to prove it in front of millions of turkey-eating fans on Thanksgiving Day.