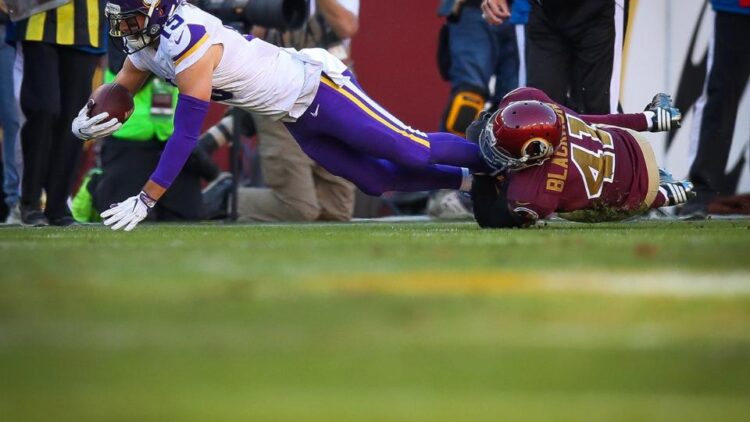 The Minnesota Vikings (5-4) were a perfect 3-for-3 in the red zone against the Washington Redskins (5-3-1) on Sunday. They even found pay dirt more often (3 to 2), yet, the good showing in the red zone wasn’t enough to earn a win in the nation’s capital. A 26-20 defeat to the Redskins dropped the Vikings for their fourth consecutive loss.

Sam Bradford was an efficient 31-of-40 for 307 yards and two touchdowns. His lone interception with 5:44 to play, however, was a major blow as the Vikings were driving and only trailing 23-20.

The Vikings defense got off to a slow start as Washington took their opening possession 10 plays for a touchdown and an early 7-0 lead. Jamison Crowder made a nice catch for the score on a low throw from Kirk Cousin on 3rd-and-1 from the 4 yard line.

After three Jeff Locke punts on the Vikings’ first three possessions, they finally mounted a second quarter red zone drive. The big play was a 36-yard pass from Bradford to Stefon Diggs down the left side line to put the Vikings in Washington territory at the 31 yard line. Three plays later, Bradford connected with Kyle Rudolph in the right flat who rumbled to the one yard line. It took Matt Asiata three tries to power it in. The one yard touchdown run off the right guard cut the lead to 14-7.

On the Vikings next possession, Diggs came up big again with three receptions for 38 yards. Bradford capped off the seven play drive by connecting with Rudolph for a 20-yard touchdown pass to tie the game at 14-14.

Diggs caught 13 balls for 164 yards in the game, but none were bigger than his 26-yard catch down the right sideline with 50 seconds left in the half. Diggs made a nice catch with a defender closing in for a big hit. The hit never happened as Diggs ducked under the contact and also secured the catch to move the chains to the five yard line. Two plays later, Bradford found Adam Thielen for the score as the Vikings took a 20-14 lead into the break.

The half, however, ended on a sour note as Blair Walsh missed his fourth extra point attempt of the season. The Vikings struggled to turn the momentum around as the Skins shut them out in the second half.  Washington added four field goals including one from 50-yards to secure the win.

Offensive coordinator Pat Shurmur knows the NFL is about putting points on the board. After last weeks loss, he talked about his desire to improve in the red zone and also in critical situations. The Vikings may have lost again this week, but it was nice to see improvement in the red zone.