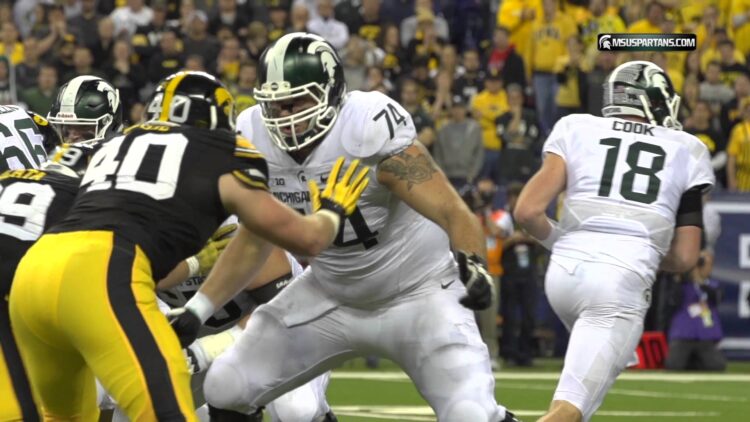 Great Run Blocker. Good balance to stay with his blocks and will show aggression all the way to the whistle. Can move to the second level blowing up linebackers and moving defenders downfield with his active feet and strong upper body. Conklin plays hard and is physical at the point of attack.

Good Pass Blocker. Conklin has been reliable at protecting quarterback Conner Cook’s blind side giving up only four sacks in 38 career games. When he squares his shoulders to the defender and gets his long arms on the pass rusher, Conklin does a nice job maintaining his block and protecting the back side.

Good Frame and Length. Conklin is well-built with excellent core strength and uses his powerful upper body and center of gravity to be a mauler in the run game.

Smart with a good work ethic. A former walk-on, Conklin quickly earned a scholarship and a starting job after a redshirt season in 2012. His consistency, work ethic and quick-minded intangibles should lead to a successful NFL career.

Not A Great Athlete. Might lack the necessary foot speed to play left tackle at the next level and might be best suited at right tackle or inside at guard. Some scouts love his potential while others are only lukewarm.

Inconsistent as a pass blocker and will struggle with speed rushers. Baylor’s Shawn Oakman had some success getting Conklin leaning and off balance on a number of occasion in the 2014 Cotton Bowl. Oakman was not credited with a sack in the game but he was able to expose Conklin’s lack of quickness and athleticism with his combination of speed and length off the edge.

Brandon Scherff, Washington Redskins. The former left tackle from Iowa made the all-rookie team this season and has successfully made the transition to the guard position in the NFL.

The 6-foot-6, 318 pounder from Michigan State was named a first-team All-American by Sporting News and by USA Today and second team by The Associated Press. Conklin is currently ranked among the top 25 NFL prospects on most draft boards.

The Vikings surprised a lot of people by stealing the NFC North title in 2015. Mike Zimmer has found success with a young, attacking defensive and a strong ball-controlled running game. New offensive line coach Tony Sparano will certainly implement changes along the offense line, but I don’t think Zimmer will stray too far away from the run-first approach that has been the bread and butter for the Vikings. Conklin is a good fit because he can compete with Matt Kalil at left tackle, or he can step inside and play left guard if Brandon Fusco moves back to right guard. Conklin played well against Alabama in the Cotton Bowl and his tenacious style of play makes him one of the nation’s best run blockers.