Quote of the Week: The Minnesota Vikings Dig Stefon Diggs 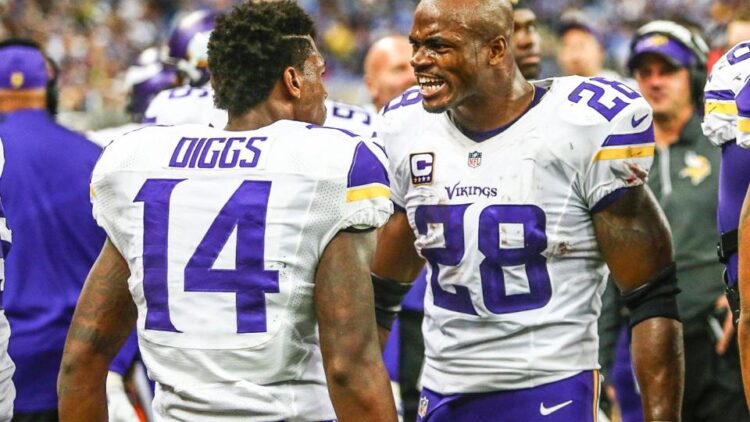 Locker room chemistry in the NFL is underrated. Look at Dallas Cowboys defensive end Greg Hardy, who yesterday confronted teammates and nearly fought a special teams coach during . Dez Bryant, his fiery teammate, stepped in to stop Hardy from taking the tirade too far, but the damage was already done. Reporters are questioning Jerry Jones for signing a player with a history of domestic violence, and Ian O’ Connor of ESPN believes the Cowboys should suspend Hardy for his actions.

Incidents like that will only divide locker rooms, and the tension’s building outside of Dallas, too. In Philadelphia, one player entered the locker room after last night’s loss to the Carolina Panthers screaming, specifically telling his teammates to catch the football. Eagles receivers dropped seven passes last night, some of which may have kept the team competitive in an important conference game. It’s a problem that’s affecting teams negatively, on and off the field. The Cowboys have lost four straight, the Eagles are 3-4, and they’re losing ground on the division-leading New York Giants.

For the Vikings, it’s a much different story. They’re 4-2 after an impressive comeback victory on the road against the Lions and look like a team that enjoys playing football together. They’re young —with a number of rookies contributing on both sides of the ball — and the mix of veteran leadership and Mike Zimmer’s coaching mentality is creating an environment players want to be a part of. Just look at this clip after Stefon Diggs’s electrifying 36-yard touchdown grab:

Mike Wallace appears fired up as he speaks to Joe Berger and Matt Kalil, likely as a result of their sound blocking on the Diggs touchdown. Diggs overhears the excitement and rushes over to give Berger a hug. It was a candid moment caught by the Fox cameras and one that shows the connection at every level of this roster, from the veteran starters to the rookie sensations. Teddy Bridgewater, not unaccustomed to these interactions, spoke to the “Diggs Effect” after the game:

[quote_center]”You have to love that guy because he’s so energetic and so excited about playing in the NFL,” Bridgewater said. “Even (Saturday) at our walkthrough, when everyone was at walking tempo, he was running at full speed. That’s just how he is.”[/quote_center]

For the second time in as many games, Diggs led Vikings wide receivers, catching six passes for 108 yards in yet another explosive performance. He leads the league in average yards run per route, outperforming players like Antonio Brown, and he’s rocketed to the team-lead in reception yards. Through three games, he has 19 catches and 324 yards, giving him 17.1 yards per catch.

Diggs even ran the ball for nine yards on an end-around yesterday, all but signaling the end of Cordarrelle Patterson’s reign of mediocrity in Minnesota. The rookie out of Maryland can do everything Patterson can, only better. He runs crisp routes, most notably on the double move to score yesterday, can return punts and kicks, and is collectively loved by his teammates.

His attitude, whether he’s running through walkthroughs or preparing for a game, is infectious. After his touchdown, Diggs’s teammates celebrated emphatically, re-enacting his new “digging” dance and swarming him with hugs and high-fives. There’s no “me first” attitude in Minnesota. Mike Wallace isn’t complaining about his lack of touchdowns; he’s praising Diggs and calling him the second-coming of Antonio Brown. Kyle Rudolph isn’t worried about his lack of touches; he’s doing what he needs to do as a blocker and a red zone threat.

And Adrian Peterson? The picture at the top of the page is all you need to see to learn how he feels. The Vikings dig Stefon Diggs.