Vikings Digg Deep For The Win 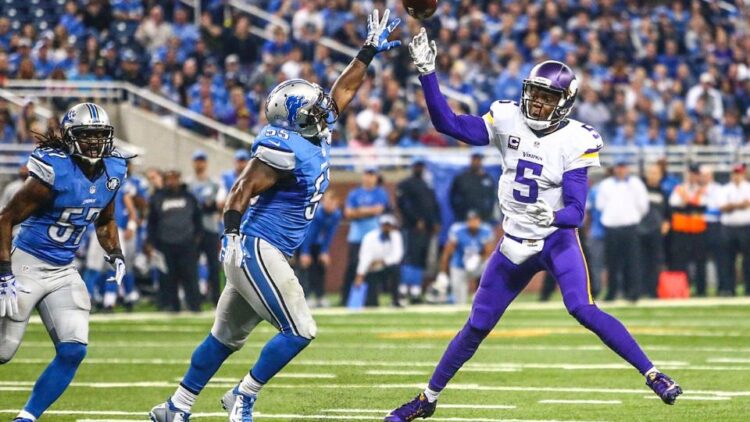 Adrain Peterson was held in check for most of the game, but his 75-yard run in the third quarter set up a 35-yard Blair Walsh field goal to give the Vikings a 25-17 lead and help Minnesota secure a much needed road win over the Detroit Lions 28-19 at Ford Field. Peterson rushed for 98 yards on 19 carries for the day.

Blair Walsh was 5-for-5 on field goal attempts with his longest being a 53-yard kick in the second quarter. Walsh finished the game with 16 points and his three field goals in the first half kept the game close as the Vikings trailed by two 17-15 at the half.

Matthew Stafford and the Detroit offense was clicking on all cylinders to start the game finding the end zone on their first two drives to take an early 14-3 advantage in the first quarter.

Teddy Bridgewater was 25-of-35 for 316 yards and two touchdown guiding the Vikings to 22 unanswered points in the second and third quarters. Rookie Eric Kendricks led the Vikings defense with 6 total tackles and 2 sacks. The Vikings defense got off to a slow start, but they dialed up the heat on Stafford sacking him 7 times and holding Detroit to 1-of-10 on third down efficiency and 0-of-2 on fourth down attempts.

The Vikings first touchdown of the game was a 1-yard pass to Kyle Rudolph who made a great one handed catch off a nice play action on 3rd-and-goal cutting the score to 17-12. The grab capped off a solid 7-play 79-yard drive that left 1:51 on the clock before the half. The Vikings defense then forced a 3-and-out in 36 seconds giving the Vikings just enough time to move into field goal range before the break.

The Vikings took the lead on the first possession of the third quarter when Bridgewater hit rookie sensation Stefon Diggs on a deep out and up for the score that gave the Vikings a 22-17 advantage that they never relinquished. Diggs caught 6 balls for 108 yards and the go ahead diving touchdown reception that Vikings fans will be talking about all week.