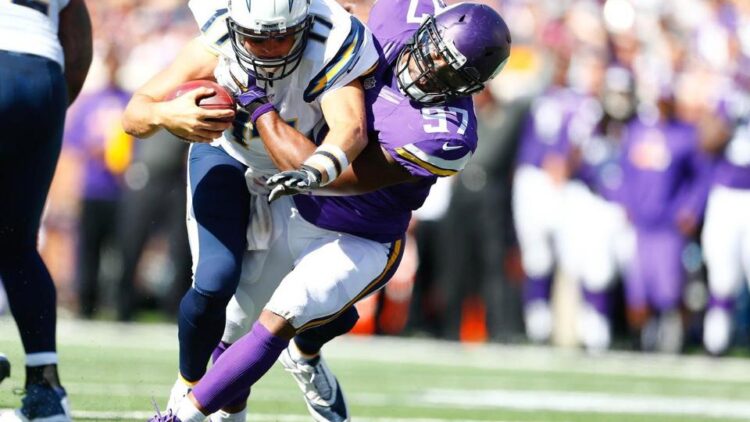 Mike Zimmer laid the blueprint for success when he arrived in Minnesota last season, and those plans are finally becoming a reality for his young Vikings team after a dominating victory over the San Diego Chargers in Week 3.

The tape from their latest performance — and from their Week 2 demolition of the Detroit Lions — is covered in Zimmer’s fingerprints. A relentless pass rush, a grinding running game, and endless pressure packages paved the way for the Vikings’ 2-1 start on the field. The second-year head coach brought more than just schemes and concepts to Minnesota, though — he instilled a mentality that has permeated every player in the Vikings locker room.

Following yesterday’s win, Zimmer was asked what makes his defense “go”, and while success stems from stopping the run,  Zimmer believes a tough, physical mindset can impact a game from the very first snap:

[quote_box_center]”It is important to be able to do that. I know that our guys are starting to take a lot of pride. They came out in the three tight end set, which we have seen before and it was good that we shut it down early and it’s about a mindset and about physicality and about toughness and all the things that I really try to preach every single day. But when you can stop the run then eventually you can lay your ears back.”[/quote_box_center]

This approach was clear from the start, as Zimmer sent Eric Kendricks and Anthony Barr on multiple A-Gap blitzes throughout the game to harass Chargers quarterback Philip Rivers. He was sacked four times, nearly matching San Diego’s sack totals through Week 2 (six sacks). On the backend, Harrison Smith and Xavier Rhodes attacked the line of scrimmage in the running game, and rookie Trae Waynes even contributed five tackles after replacing the injured Rhodes in the third quarter.

Everson Griffen, who led the team with 1.5 sacks, reflected on the Vikings’ dominance in the trenches and their abuse of Rivers in the pocket. “You just have to be hungry. The hungrier you are and the harder you work, then you will be able to get after the quarterback,” he said, echoing the sentiments of head coach Mike Zimmer.  “The more you can affect the quarterback, the better your defense is probably going to play.”

As a whole, Minnesota’s defensive excellence spanned every inch of the field. Behind a banged-up offensive line, rookie running back Melvin Gordon averaged just 3.64 yards per carry and Philip Rivers finished the day with just one touchdown and 246 yards through the air.  Simply put, the Vikings are suffocating opponents, allowing teams to score an average of 16 points per game, which ranks fifth in the league through Week 3.

On the offensive side of the ball, Minnesota is riding Adrian Peterson’s rejuvenated legs — and the road-grating blocking of his offensive line — to victories. Yesterday, Peterson rushed 20 times for 126 yards and 2 touchdowns, a vintage performance capped off by a 2012-esque 43-yard touchdown run. It was a thing of beauty, but more than that, a proclamation that the Vikings are going to run this offense through Adrian Peterson while Teddy Bridgewater continues to develop.

In his last two games, Peterson has rushed 49 times for 260 yards while averaging 5.3 yards per carry, thanks in large part to his return to “football shape.” As Chris Tomasson of the Pioneer Press wrote last night, Peterson worked hard in preparation for Week 3, running 18 100-yard sprints on Tuesday — the Vikings’ off day —to condition himself for the Chargers.

The offensive line, which entered the season haunted by doubt, is also quietly improving from week-to-week. Against the Lions, the unit played surprisingly well, executing sound double-teams up front to spring Peterson loose. This week, their assertiveness was on full display, as players like T.J. Clemmings, Joe Berger, and Matt Kalil fired off the ball and moved San Diego’s interior defensive line with ease. Yesterday was the first game in which we saw Vikings players drive defenders back on the ground and create space for the running backs inside.

With an unforgiving pass rush and Adrian Peterson’s lights-out play through three games, Mike Zimmer’s Vikings have a chance to play deep into January this season. I’ll leave you with a quote from Matt Kalil, whose recent improvement and aggressive play embody the very attitude that Mike Zimmer brought with him to Minnesota:

Talked to Matt Kalil, who might have summed up today's game plan best: "We’re going to move your guys and you can’t do anything about it.”

The Vikings are 2-1 and travel to Denver to take on the Broncos in Week 4. Follow Vikings Territory for more coverage throughout the week.