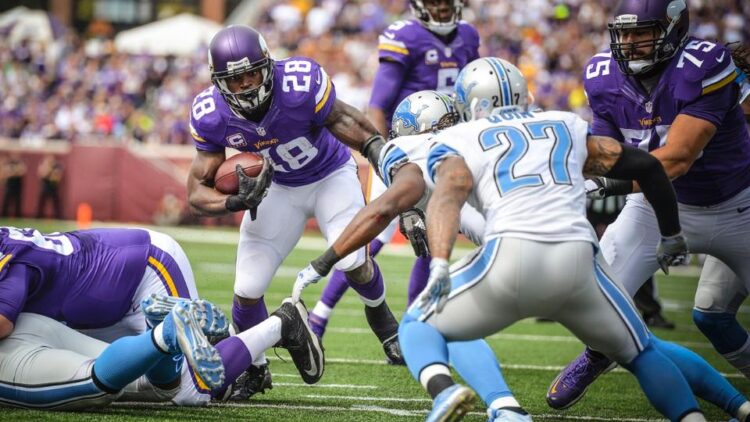 Adrian Peterson ran for 134 yards on 29 carries to help lead the Minnesota Vikings over the Detroit Lions 26-16 at TCF Bank Stadium. Peterson had 192 total yards and the Minnesota Vikings rebounded from a rough season opener. Peterson now owns the franchise record with 12,577 combined total net yards surpassing Cris Carter who held the record before the game at 12,410 yards.

Teddy Bridgewater managed the game well throwing for one touchdown and running for another while finishing 14 for 18 for 153 yards. The Vikings set the tone on the opening possession marching 75 yards on 11 plays capping it off with a five yard touchdown strike to Kyle Rudolph in the back of the end zone.

The Vikings defense also turned in a rebound performance holding the Lions to just 38 net yards rushing for the game. Matthew Stafford was an erratic 32 of 53 for 286 yards and two touchdowns as the defense did a good job containing Detroit’s short passing attack which proved effective against the Vikings last season.

Captain Munnerlyn led the defense with 7 total tackles, a forced fumble, and good coverage in the secondary. Harrison Smith also forced a fumble and Justin Trattou came up with a big fourth quarter interception on a short screen pass at mid field to help seal the win.

The Vikings went up 14-0 early in the second quarter when Bridgewater faked the hand-off to Peterson up the middle and ran it around the left end untouched for the one yard touchdown. Bridgewater looked poised in the pocket while also frustrating defenders with his ability to avoid pressure running six times for 21 yards with one sack.

Blair Walsh was 2/2 on field goal attempts, connecting on a 28 yard second quarter boot and a fourth quarter 23 yard score.

The Vikings had control of this game from the opening drive and never looked back improving to 1-1 on the year. Yes, this game was much more indicative of the type of performance I expect from a Mike Zimmer coached football team.