VT Question of the Week: Where Does Teddy Bridgewater Rank Among NFL Quarterbacks? 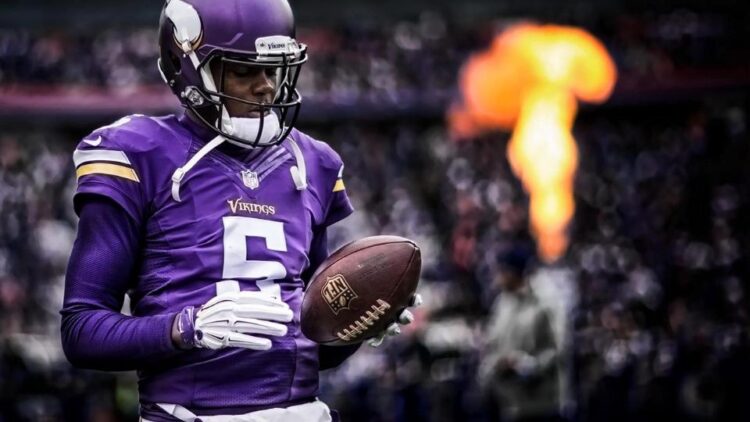 This week’s question was Brett‘s idea, and we love it! Each writer was asked to rank Bridgewater in the pool of NFL quarterbacks and to include five spots both above and below for context.

Teddy’s at that odd stage in his career where it’d be better to leave him off a quarterback ranking list and give him a “to be determined” grade. He’s shown flashes of brilliance and also cratered a few times in his rookie season, but trended upwards at the end of the year enough to make Teddy the apple of most analysts’ eye (except Andy Benoit, but who cares what he thinks) headed into 2015.

Potential is hard to quantify though, especially since static rankings don’t necessarily convey projection very well, so I put Teddy as dead center as possible: Number 16.

Above him are are group of established but haven’t won anything veterans (Rivers and Palmer) and three youngish quarterbacks on their second contracts who kinda… “Are who we thought they were.” All three still have potential to move into the top-10 (possibly through attrition & retirements), but would it be outlandish to label Ryan, Newton, & Tannehill as career second-tier signal callers? Probably not.

Below Teddy is a gun slinger who fits in the young, big extension, but could be meh mold in Colin Kaepernick along with four dumpster fire veterans who are basically differing levels of hot garbage. Matt Stafford is essentially Jeff George and will be exposed for the third-tier quarterback he is after Megatron is finally put up on blocks. Eli is on lifetime scholarship because David Tyree had a stickum helmet and Mario Manningham was the flexible dude from The Fantastic Four for 3 seconds of his life. Sam Bradford is the deep fried funnel cakes of NFL quarterbacks. He could be really good if he was healthy, but he’s not so who cares. And Jay Cutler is a terrible NFL quarterback despite being vaccinated.

So that’s where Teddy is. He’s the Mendoza Line of decent for this season. After he beats down 2015 like it owes him money, I can’t wait to put him in the top-10 next season. Right behind Andrew Luck & some dude who wears #12.

Geez, this question was hard (thanks, Brett!). It was a lot of fun to think about, though. When I made my initial list and then compared it to the stats and ranking on NFL.com, there were a few major differences between my rankings and the “official” ones (Eli Manning at No. 6?!).

If we’re going solely based off last-year’s performance I might have dropped Bridgewater a couple of spots, but heading into 2015 I am more than confident putting him at 15 … and I expect he’ll be ranked higher by the end of the [post]season. Bridgewater had a 64.4 completion percentage in 2014, despite the tremendous pressure he got from opposing defenses. When considering (1) Bridgewater got thrown into the fire much earlier than planned on, (2) Adrian Peterson sat out an entire season and (3) the Vikings O-line proved abysmal, the rookie QB did a pretty dang-good job of coming out and showing the league what he’s capable of. With improved protection and a year of learning the system under his belt, Bridgewater will be ready to rock.

Flacco, Rivers, Smith, Ryan and Stafford have all been in the league longer and have proven their consistency to be more established than Bridgewater at this point, so I put them all ahead of him. Especially when it comes to throwing the ball deep, these guys have the upper hand. I have never been completely sold on Tannehill, which is probably an unfair personal bias, but even with his solid numbers I wouldn’t pick him over Bridgewater. I’m guessing I put Manning lower than most other people, but I stand by it. He’s absolutely had some highlight-reel games, but I think that’s what makes me rank him so low–he’s a QB of extremes, and when he’s in a slump he’s really in a slump. He’s a ticking time bomb.

I had a hard time deciding if I wanted to rank Cam Newton over or under TB, but in the end I feel that Bridgewater is a better passer, making him more of an offensive threat than Newton. I would take Bridgewater any day over Dalton, Cutler, Tannehill and Eli Manning. They may throw for a lot of yards, but they’re not as accurate and are more of a crapshoot when it comes down to who you want to rely on.

The quarterbacks above Teddy: I think Teddy is great, and will be great for years to come, but I can’t bring myself to rank him any higher than 18…YET. With another season under his belt and the chance to improve on his impressive rookie numbers, Bridgewater could easily pass Palmer, Newton, and Tannehill in next year’s rankings. For now, he’s trying to play catch-up; before blowing up his knee, Palmer enjoyed a renaissance season with the Cardinals in 2014 and was one of the league’s most productive quarterbacks. Newton and Tannehill represent the “new-age” quarterback, one who has the ability to beat you with his legs or with his arm. In four seasons, both quarterbacks have improved different areas of their game — Newton with pocket presence and Tannehill with deep ball placement and accuracy. Manning and Stafford, on the other hand, are veterans with a number of accomplishments under their belts. Manning has won two Super Bowls, and Stafford has one of the league’s best arms (and passing yardage to prove it).

The quarterbacks below Teddy: So what makes Teddy “better” than the quarterbacks below him? While none of them are necessarily bad, there’s qualities that hold them from moving up this list. A ranking of 20 isn’t much different than a ranking of 17, and a ranking of 14 isn’t significantly better than Bridgewater at 17. But, there are slight differences — Teddy needs to improve his deep ball in 2015, but his ‘issues” aren’t as deadly as Kaepernick’s inability to see the field or Derek Carr’s rushed play in the pocket. For players like Jay Cutler and Alex Smith, we’ve passed the point where they can “become” new quarterbacks. Cutler will always be the reckless gunslinger and Smith will always be the king of the check-down. Dalton is bad, but he’s ranked this high because the Bortles and Geno Smiths of the world are much worse. And Carr…is not as good as Teddy Bridgewater.

Brett: No. 15
Before giving my rankings, I want to say that this is strictly based on my projections for the 2015 season. These are not longterm, “dynasty” rankings (to use a fantasy football term). They are a snapshot in time of how I think these quarterbacks stack up at this moment with no consideration given to future value. With that being said, I put Teddy Bridgewater at #15 on my list.

I wouldn’t bat an eye if someone had Bridgewater above Eli Manning and Cam Newton. In fact, I did originally but dropped him behind those two after considering the time they’ve been in the league and that they’ve proven more than Bridgewater has at this point. But if they continue to perform on par with how they have in recent memory, I could see Teddy usurping them quickly.

Outside of those two, it was very clear to me where Bridgewater fit and who he was already above. Ryan Tannehill has been inconsistent since entering the league and it could be argued that Bridgewater has already shown he can be better based on his performance in the second half of the 2014 season. Cutler, as we know, has rapidly declined recently although he certainly has the weapons to rebound. Andy Dalton, the litmus test for quarterback mediocrity, chokes when it comes to crunch time – a time where Bridgewater flourishes. Carson Palmer has issues staying healthy but I think I’d still head into the season with Bridgewater even if the aging veteran could be guaranteed a clean bill of health. And finally, Colin Kaepernick dazzled in his rookie year but teams have quickly learned how to contain his speed and force him to rely on his arm.

Headed into his sophmore season, Bridgewater shows a ton of promise and is a beacon of hope for Vikings fans desperate for any semblance of a franchise quarterback. Obviously, anything can happen in the 2015 season and, quite honestly, I’ve learned as a Vikings fan that if it seems too good to be true, it probably is. But Teddy feels different, right? I mean, would anyone be truly surprised if he finds himself in the conversation of top-10 at this time next year?

I wouldn’t. And based off of where I have him now and the continued drop-off of some of the older veterans above him, I almost expect it.

Ted Glover, The Daily Norseman: No. 14
First off, Hi there Vikings Territory, and thanks to Lindsey and the gang for inviting me to participate in this week’s question. But is this a question, or an essay for a final in a Master’s course? Either way, here’s what I came up with:

Why he’s not above the five in front of him: Basically, for as encouraging as Bridgewater has been, especially over the last month of the season, he still needs to prove it. The guys above him (and the guys above them) have put up big numbers over a period of time, and have won in the post season, with the exception of Tannehill. So why is Tannehill up so far? Because he’s passed for over 3,900 yards in 2013, and over 4,000 in 2014. He’s also increased his TD passes, and decreased his interceptions each year. And he really hasn’t had what one would consider a top notch receiving corps, other than Mike Wallace…who is now on the Vikings.

Why he’s better or as good as the guys below him: I think Teddy is right even with Stafford and Palmer, who has had a career revival in Arizona. He has the poise and calmness of a seasoned veteran, makes all the throws, and is settled in the pocket, a vibe I don’t get from an Andy Dalton. He doesn’t turn the ball over  like Jay Cutler, isn’t a check down king afraid to throw to his wide receivers like Alex Smith is, and as a fan, he gives me immense confidence heading into a game, like Newton.

Teddy is also going to have a second year under Norv Turner’s tutelage, Adrian Peterson back, and an upgraded receiving corps. Maybe this is me being overly optimistic, as I, like most of you, have wandered in the quarterback wilderness for the better part of 30 years, and other than the brief oasis of Daunte Culpepper and 2009 Brett Favre, we haven’t seen great QB play around here.

But by the end of 2015, I would be stunned…stunned…if Teddy Bridgewater isn’t a top 10-ish QB in the NFL. He has the tools, the talent around him, and the coaching staff on the sideline to help him realize his potential. The time is now.