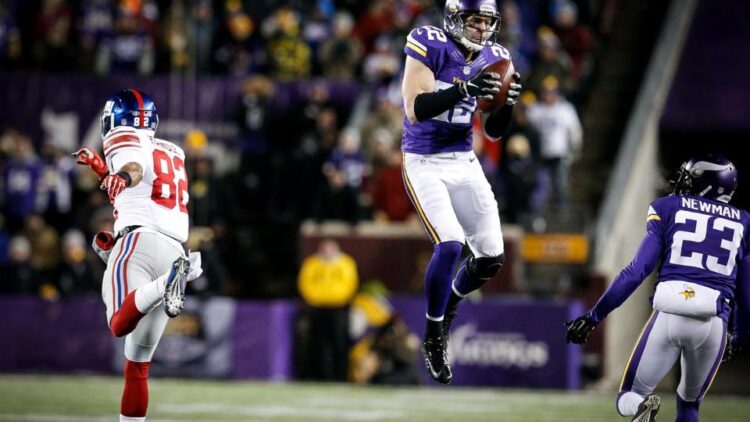 Teddy Bridgewater has won this heralded (by me) award two weeks in a row, and it was a landslide last week, but he’ll be in for a little tougher competition this week, I suspect.

The 49-17 shellacking of the visibly uninspired New York Giants featured a ton of impressive performances for the Vikings. It really was a team win, and despite all the great stats and highlights to come out of it, picking just one player to anoint as “the best” of the week might be tougher than I imagined.

Here are this week’s nominees…

Teddy Bridgewater led the team to a lopsided win to cap off a nice December month for the young quarterback. He completed 15 of his 25 passing attempts, posted 168 passing yards, an additional 12 rushing yards, and a nifty touchdown throw to Kyle Rudolph. Perhaps this performance isn’t too noteworthy for what Bridgewater did, but it is what he didn’t do (turn the ball over) that let the rushing attack and dominating defensive play turn this game into touch football by the time the fourth quarter rolled around.

Adrian Peterson used Week 16 to build a bit of a lead over Doug Martin for the NFL’s rushing title. He turned his 22 carries into 104 yards (4.7 yard average) and the performance kept the Vikings ahead in the field position battle for most of the game. Peterson also had a fifteen yard pickup on his lone catch, although he did drop one pass, and held up pretty well in pass protection.

Although he played a very limited role, McKinnon got his chance to shine once the game was out of hand, and “Jet” didn’t disappoint. He carried the ball seven times for 89 yards (12.7 yard average) and scored twice making my brain unable to avoid the phrase “McKinnon is McInAgain.” He also caught two of his three targets in the passing game which he converted into eight yards gained.

As hard as I’ve been on this offensive line, and as beleaguered as New York’s defense might be, it would be a mistake to not acknowledge how well they played with Mike Harris once again leading the way as the team’s most consistent blocker. Pro Football Focus went out of their way to note how dominant the Vikings line was in the run blocking category, producing a game recap with the headline “Vikings Interior Gashes Giants On The Ground.” They noted that even if you took McKinnon’s 68 yard dash to the endzone out of the equation, over half of the Vikings rushing yards came before contact.

The rotation along the defensive line is just scary when you sit back and think about it. Despite the return of Sharrif Floyd, Tom Johnson peppered Eli Manning throughout the evening, leading him to produce five tackles and two sacks, a very productive performance that clearly left Manning longing for some better protection as the game wore on.

The rookie defensive end is quickly shedding the “raw” label and appears to be a legitimate option for Mike Zimmer defenses of Vikings future. In the present, however, Hunter is churning out a very impressive rookie campaign and Sunday was no exception. He was all over the place with three tackles both on defense and on special teams, he added another sack to his season total, and even managed 10 yards on an impromptu kick return.

It might have taken a year to get Munnerlyn really in sync on this defense, but he certainly looks to be at home as Mike Zimmer’s slot corner in 2015. Munnerlyn ended Sunday’s game with three tackles, an important interception that led to a touchdown, and was the game’s highest graded cornerback over at Pro Football Focus.

Harrison Smith returned to the field just in time to remind the general public, on a national stage, just how ridiculous it is that he isn’t a Pro Bowler this year. Smith played lights out football, which was greatly missed during his absence, and capped the nice day off with a 35 yard interception return for a touchdown in the second quarter… the turnover and score that really started to get the Vikings some significant separation in the contest.

I loved what Jarius Wright did on his three receptions, two of which went for third down conversions. Kicker Blair Walsh was the team’s leading scorer despite missing an extra point attempt. Everson Griffen was a consistent presence on Sunday despite what his stat line says. I understand you might have another favorite choice for this award and, by all means, please hit “OTHER” and cast your vote via the comments section!

The results of your voting in previous can always be tracked on our SCHEDULE PAGE.