POLL OF THE WEEK: Vikings Have Question Marks at Cornerback 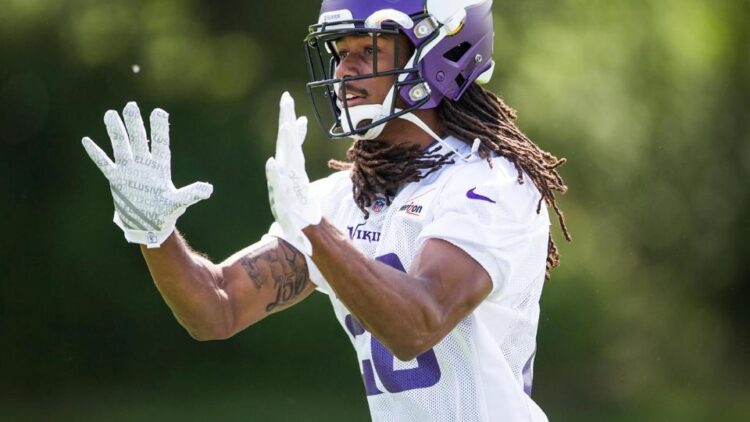 Before Josh Robinson’s injury, many envisioned a solid starting group of cornerbacks for the Minnesota Vikings. With budding superstar Xavier Rhodes manning the left side of the field and veteran Terence Newman lining up opposite him, Mike Zimmer’s unit had the potential to field one of the league’s best secondaries.

However, the likely loss of Robinson for a stretch of 2015 creates intrigue at the slot/nickel position, where the 24-year-old cornerback was one of the favorites to start. After an up-and-down year that saw him start 6 games and finish with 2 interceptions, Robinson entered the offseason with hopes of carving out a full-time role in Zimmer’s ever-shifting scheme.

Per Bleacher Report’s Ian Wharton, Josh Robinson is “rotation-worthy”, making him an ideal fit in a Zimmer defense that requires a number of different lineups:

#Vikings CB Josh Robinson finished with a below-average score in #CoverageProductivity, but he is rotation-worthy pic.twitter.com/tSE0ObXMiL

But that changed when Robinson suffered a pectoral injury that kept him out of the team’s minicamp practices last month. His absence opened the door for a number of players, one of whom will likely start the season in his place. In the spirit of Brent’s latest article on the team’s cornerback depth, I’ll quickly sort through the options in the slot.

I’m sure you’re wondering why I didn’t list Waynes as a starter in the first paragraph — he’s the team’s 2015 first-round pick, he was an excellent corner in college, and he’s made quite the impression on coach Zimmer, per ESPN’s Ben Goessling:

[quote_box_center]”We’re asking him to do a lot of different positions, play a lot of different coverages that he didn’t have to do in the rookie minicamp [in May],” Zimmer said. “But as far as technically, he’s improved in his transition out of the breaks quite well. I think he’s starting to understand things better. Because we are playing him in a few different places, he’s still sometimes unsure of what he’s supposed to do and where he’s supposed to be at, but I like him.”[/quote_box_center]

There’s your answer — he’s Zimmer’s experiment, a player who will need time and reps to develop into the corner many fans believe he’ll become.

Because of a foot injury to Captain Munnerlyn, Waynes saw plenty of time with the first team defense throughout OTAs and minicamp. However, the majority of his snaps came from the slot, while Rhodes and Newman started outside. With the second team, he lined up at his natural position, but according to defensive coordinator George Edwards, the split was all by design:

While it’s not impossible to image Waynes starting the season in the slot, it’s definitely not the team’s best use of roster talent to do so. Waynes, like Xavier Rhodes, is a boundary defender with the ball skills to thrive on the outside — this experiment is Zimmer’s personal litmus test on Waynes. He’s talented enough to play inside, but both parties would be better served if Waynes learned behind a player like Terence Newman on the outside.

After signing a three-year, $11.25 million deal with the Vikings last offseason, Munnerlyn quickly became one of the team’s most disappointing players. He struggled playing opposite Xavier Rhodes and was often beat in coverage,  per Brian Hall:

[quote_box_center]”Coming in last year, I wasn’t in the best shape,” Munnerlyn said. “I didn’t play my best football. I pulled hamstring early, started on the (physically unable to perform) list. I just wasn’t myself. I wasn’t myself. So I just had to go back to the drawing board. Gone back to the drawing board and I’m excited again, and ready to play.”[/quote_box_center]

The 5’9″, 195-pound corner is more suited to the slot, and after proving that in 2014, will have a tremendous chance to start inside come 2015. He and Zimmer weren’t always on the same page last year, but this season provides new opportunities, one of which may come solely in the slot.

Munnerlyn’s battle for the starting position may be tough, though, as the 27-year-old suffered a foot injury that kept him out of OTAs and minicamp. He’s reportedly cut weight and is putting pressure on his foot, but Munnerlyn has plenty of competition with a group that includes Jabari Price, Marcus Sherels, and Justin Coleman.

When healthy, Munnerlyn is an excellent option in the slot, but his injury looks to create opportunities for three young players on the roster. Price, Sherels, and Coleman have little experience starting in the NFL (6 games combined), but Zimmer is regarded as a player development expert — if anyone can get the most out of young talent, it’s Zimmer and his staff.

Jabari Price, a 2014 seventh-round draft pick, took reps for the injured Munnerlyn in minicamp, but struggled to keep up at times and may have lost the opportunity to open training camp with the first team.

Sherels, a fan favorite, is also one of the Vikings’ best special team players. He averaged 11 yards per punt return last year, and in 2013, started three games at cornerback and defended seven passes in limited play. If not for the value he adds on special teams, Sherels would be a candidate to miss the final 53-man roster.

The final, and most intriguing option, is Justin Coleman, the Vikings’ undrafted rookie free agent out of Tennessee. According to Paul Allen, Coleman may have done enough during minicamp to secure a spot moving forward:

Coleman is 5’11” and 185 pounds, giving him ideal size to play inside. But, he was an undrafted free agent for a reason, and Mike Zimmer will likely stash him as a practice squad player once the season begins.

Who will start at nickel/slot corner for the Vikings in Week One?

The Vikings have a few options inside, and fortunately, have plenty of time through training camp and preseason to decide. Waynes, the team’s first-round pick, showed he can survive inside, but wasn’t drafted as a nickel player — he’s an outside corner, through and through.

If Josh Robinson misses any length of time, the Vikings’ best bet to start the season would be a healthy Captain Munnerlyn. In Carolina, Munnerlyn was a quality starter inside and appears more comfortable on quicker slot receivers than he does outside.

Players like Jabari Price, Marcus Sherels, and Justin Coleman will have a shot to compete with Munnerlyn, but it appears it’s his position to lose. Other fringe players, including Shaun Prater, Jalil Carter, and DeMarcus Van Dyke, will likely sit behind Rhodes and Newman on the outside.

So, with Josh Robinson out and Munnerlyn recovering from a foot injury, who do you think will open Week One as the Vikings’ starter in the slot?