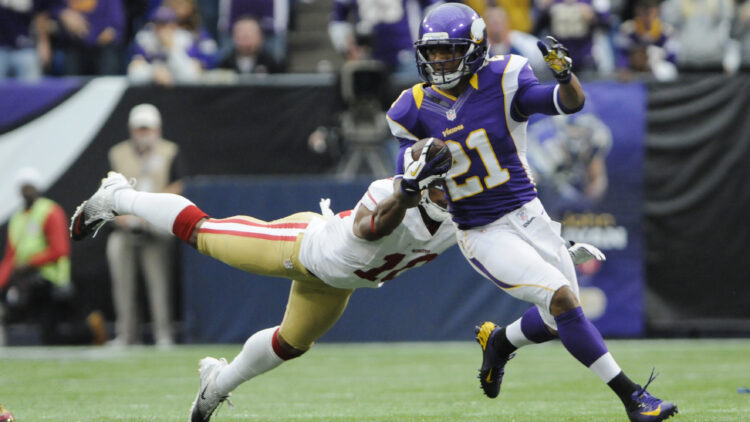 As originally reported by Nat Jordan, Josh Robinson tore his pectoral muscle in the offseason and could be out for a significant period of time.

I’m hearing second-hand from people with sources that Josh Robinson partially tore his pectoral muscle and is out for the year.

Ben Goessling at ESPN has confirmed the story and Darren Wolfson at KSTP has reported that it’s likely not season-ending. He joins Brandon Fusco, Brian Robison and Phil Loadholt as Vikings who have torn their pectoral muscles under the new regime, which seems like a lot.

From a depth chart perspective, this means that Robinson will not be in the battle to win the starting cornerback job. Given the immense depth the Vikings finally have at cornerback, that’s not as bad this year as it would be most years, and Terence Newman or Trae Waynes could win the outside spot, something Captain Munnerlyn is also competing for (though likely it seems like he will be a slot-only nickel package CB).

Robinson had a better year than many of his detractors would say, and he was an average-level starting cornerback, who would have been pretty phenomenal depth. He still will be, if Wolfson is right and the injury is not season-ending. Master Tesfatsion at the Star Tribune reports similar—Josh Robinson does not expect to be out for the year.

Neither Robinson nor Munnerlyn had participated in offseason workouts, and Terence Newman was the starting cornerback, with rare opportunities for Waynes to get on the field—mostly as a slot CB in nickel packages, which might not be his role in the future. Waynes will have to force Newman down the depth chart to really take advantage of this and become the starter Week 1.

This could also help out Jabari Price after an arrest for suspicion of impaired driving (since reduced to reckless driving). This will help him our more if Robinson enters the season on PUP or short-term injured reserve, but it cements the importance of depth at the position, something that can only help him.

The rash of pectoral muscle tears could be random, or it could be a product of switching to free weights from machines—designed by strength and conditioning coach Marcus Evans to create more dynamic and explosive movements instead of isolating muscles, though it may increase injuries.

For what it’s worth, Miami had the 9th-best record when it comes to injuries when Evans was employed there as the S&C coach from 2008 to 2010. None of the players they had on injured reserve in that period were there because of pectoral injuries, as far as I can tell.

Either way, it’s something the Vikings have to look into. That doesn’t mean changing the strength and conditioning program, but perhaps finding ways to reduce the incidence of injury.