POLL OF THE WEEK: Mystery at Middle Linebacker 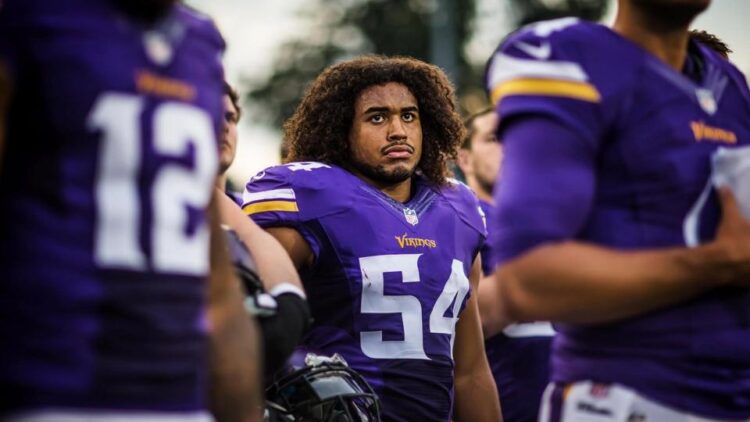 Heading into the offseason, one of my biggest concerns surrounding the Vikings was the depth at linebacker. Anthony Barr missed the final four games of the year after undergoing surgery to repair a slightly torn meniscus, and veteran linebacker Chad Greenway wrapped up his worst statistical season since entering the league in 2007.  And at middle linebacker, Jasper Brinkley finished the year with 54 tackles, but left a gaping hole in the defense after signing a free agent deal with the Dallas Cowboys.

Seventh-round pick Edmond Robinson has the size and raw tools to contribute for the Vikings in the future, but will have time to grow as he sits behind Brandon Watts, Josh Kaddu, and Brian Peters. In Sunday’s game, both Watts and Peters played well against Pittsburgh’s backups, with Peters flashing his open field skills on a fumble recovery in the third quarter.

If anything, the biggest gap remains in the middle of Mike Zimmer’s unit. The players mentioned above are going to shine during the preseason, as it’s their best chance to step foot on the field and show the coaches what — special teams depth, a practice squad spot — they can bring to the team. But three in particular appear to be fighting for a chance to man the middle of the defense: Audie Cole, Eric Kendricks, and Gerald Hodges.

Earlier today, head coach Mike Zimmer spoke to the media before practice and touched on each player’s performance from Sunday night. He also shared some insight on the team’s plan for the position moving forward, commenting specifically on the situational use of certain players throughout the year:

[quote_center]”We are going to try to use each player to their strength the best we can and however we have to do it and we might have to substitute some guys in there for certain situations.”[/quote_center]

[quote_box_center]”Audie did a good job the other night. There is something to be said about having tall linebackers. He tipped that one ball that ended up getting caught, but when the guys are 6’4”, you have him and [Anthony] Barr in there, you have two big linebackers. It’s harder to throw in the seams. The big guys who can run have a little bit more punch to them than the little guys who can run.”[/quote_box_center]

Audie Cole had an impressive outing on Sunday night while starting at middle linebacker during the Vikings’ first preseason game. In the first half alone, he recorded three tackles and forced a fumble on an aggressive hit, leading to a 32-yard Antone Exum scoop-and-return into Steelers territory.

As Zimmer mentioned this morning, one of Cole’s greatest strengths is his size. At 6’4″, 246 pounds, he has the frame to survive against the run and the length to defend the middle of the field. This was on full display last Sunday, when Cole tipped a pass over the middle that most linebackers would’ve missed — he has a knack for the football and the ability to disrupt passing lanes.

Cole has long been a reserve, but when given the chance, has taken full advantage of his opportunities. Against the Chicago Bears in Week 17 last year, Cole started at middle linebacker and was a force for the Vikings, recording 11 tackles while flying all over the field. He’s been a star during the preseason and in spot duty action, but finally has a chance to solidify his role in Minnesota.

Zimmer, when asked what he’d like to see from rookie Eric Kendricks before the season starts:

Kendricks played 29 snaps on Sunday, filling in as the team’s second-string middle linebacker behind Cole. The rookie out of UCLA entered the league as one of college’s best linebackers, known for his “plus instincts against the run and pass,” per NFL.com. Those instincts were on display against the Steelers, as Kendricks was routinely around the football in limited playing time.

But Kendricks still lags behind Cole, thanks to his relative inexperience and adjustment to the speed of the NFL. He’s well-developed for a player at this point of his career, but still suffers from rookie mistakes, like getting sucked up in the run game and playing impatiently at times. With more experience in live situations and four preseason games to sharpen his game, those problems will alleviate themselves, and Kendricks could challenge Cole for the start come Week 1. If not, he’d make for an intriguing option in the Nickel formation lined up next to his Bruin Brother, Anthony Barr.

Per ESPN’s Ben Goessling last week, Zimmer has been happy with Hodges this offseason:

[quote_box_center]”Gerald has done a very nice job of doing the things that I’m asking him to do,” Zimmer said. “I am hopeful that he will continue to do those things. If he does, then Gerald has a chance to be a very quality NFL football player. He’s big, strong, fast. He’s intelligent. If he can continue on the right path, then he has an opportunity.”[/quote_box_center]

I’ve made my man-crush for Hodges clear over the past few months, and I was thrilled when Mike Zimmer announced the former Penn State linebacker would see some time at middle linebacker. Last year, he notched 50 tackles, half a sack, and returned an interception for a touchdown against the Jets in Week 14, all while filling in for injured starters Barr and Greenway at different times throughout the season.

Hodges described middle linebacker as his “type of game,” specifically pointing out that he enjoys to “come down and shed the blocker” in the running game. On Sunday, he finished the Hall of Fame Game with three tackles and was all over the field in his 19 snaps on defense. Hodges is likely behind both Cole and Kendricks in the battle for middle linebacker, but could see time in the Nickel or as Chad Greenway’s eventual replacement at some point during the season His talents are hard to ignore, and coaches always find ways to get their best players on the field.

Who will start at middle linebacker in Week One?

Each of the aforementioned players has a shot to start for the Vikings, but there’s plenty of time left for Mike Zimmer to make a final decision. Cole, Kendricks, and Hodges bring unique skills to the team, and Zimmer may find that a rotation benefits his defense the most come the regular season. Is there a fit for all three downs, or will Zimmer employ a number of different lineups throughout the year?