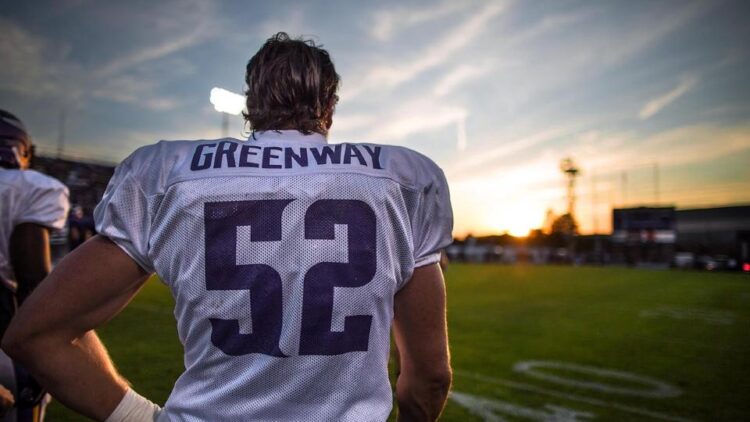 Driving home from Mankato on Sunday evening, I couldn’t shake the feeling that the Vikings were stronger at linebacker than they have been in years.

This might seem obvious, considering the team has invested consecutive early round draft picks on the position group, but I give equal credit to the development of players like Audie Cole and Gerald Hodges.

Over the course of two practices, I counted 5 different linebackers get significant time with the first team defense. The shuffling at the position should give the Vikings an advantage, no matter the down or distance.

The Vikings addressed potentially their biggest need at the position in the most recent draft. Rookie Eric Kendricks fills a spot in the middle of the defense, but he is also likely the best coverage linebacker on the team.

Not only will Kendricks help in coverage, I don’t think he’s too bad in run support either. Plenty of people have noted that Kendricks doesn’t have ideal middle linebacker size right now, but because of that, he can kind of ‘hide’ behind defensive lineman and pop out to make a play on the ball carrier.

I don’t think Kendricks will start at middle linebacker right out of the gate, that job looks like it will go to Audie Cole for the time being. Cole spent the most time with the first team base defense and although I’ve been a noted Cole skeptic for sometime, he played well in my opinion.

It is hard to deny that Cole has a nose for the football. He has made a lot of plays in sporadic playing time thus far, but he has also left the team exposed in coverage at times. My knock on Cole has been that I feel he gets ‘caught in the wash,’ or sucked into blockers too often. With that said, I didn’t see Cole struggle with this that often during practice.

I’m not sure Cole is the long term option at middle linebacker, but I think he’ll be given an opportunity to prove his fit on this team. Just last night, Cole intercepted Teddy Bridgewater in the combined team scrimmage. If he continues to make plays and has done so, can you take away the role as a starter from him?

One of my absolute favorite linebackers on this roster is Gerald Hodges. He seems notably more confident this year and is poised to make a big impact in 2015. The sad truth is that Hodges likely won’t start this year.

Hodges, like four others, spent time with the first team, as the inside linebacker in a nickel scenario and made a memorable play when he flashed to the flat to corral Jerick McKinnon on a swing pass to the far sideline. Head coach Mike Zimmer was very vocal with his praise and I got the sense he was proud of Hodges’ development in that area.

If Hodges can continue to do the right things, he will get his opportunity to be a vocal leader on this defense.

The reason Hodges doesn’t start is because of 10th year veteran Chad Greenway. A year ago, the Vikings were experimenting with Greenway at middle linebacker – this year, Greenway’s role is set in stone.

Greenway will be a familiar fixture of the 2015 defense and will likely play on some 3rd down situations. I know Greenway really wants to be a three down linebacker, but I can’t see the Vikings passing on the opportunity to leverage Kendricks’ coverage on passing situations.

Greenway’s veteran leadership will help immensely with a fairly young roster – no matter the side of the ball. You have to trust Greenway to know his role and hope his body doesn’t fail him. I don’t think it’s out of the question that Greenway can make an impact week in and week out, but he must remain healthy and used appropriately.

Second Year man Anthony Barr looks more confident and decisive in coverage this year compared to 2014. Barr is so big and athletic, he really can cover a lot of space – seemingly with a lot of ease. Although there are some new concerns about Barr’s conditioning and camp shape, I think Barr will continue have an impact as a pass rusher and could spend some time coming off the edge as a defensive end.

I am slow to critique Barr on being a bit heavy, noting that he’s coming off of knee surgery that likely limited his ability to do rigorous training in the off season. However, you do wonder if his disjointed off season limits his readiness for the new season.

The depth at the position give the Vikings another layer of flexibility and versatility, similar to what they deploy on the defensive line.

Although it might be difficult to see the team going with a similar rotation at linebacker as they do defensive tackle, there is an opportunity to leverage strengths in specific situations where players can be put in a position to succeed. If played as a unit, verse individual contributors, this position group can do serious damage.

Imagine a nickle situation, where you can rely on Hodges’ run support, Kendricks’ coverage abilities and Barr’s ability to rush the passer from the edge as a defensive end. I know I continue to circle back to the flexibility this gives the team, but it really does provide me some confidence that we should be better suited to stop a 4th and 16 with the game on the line.

I have noted that I believe the 2015 Vikings are a balanced team. Not only equally strong on both sides of the ball, they don’t thrive in one particular area, either. From the defensive line to the secondary, the team has components to make each a strength.

This includes the linebacker corps, which is vastly improved from years past. Credit for that has to go to Rick Spielman and Mike Zimmer, who seemingly have pulled talent from both the early and late rounds of the draft to turn the position into a growing strength of the team.