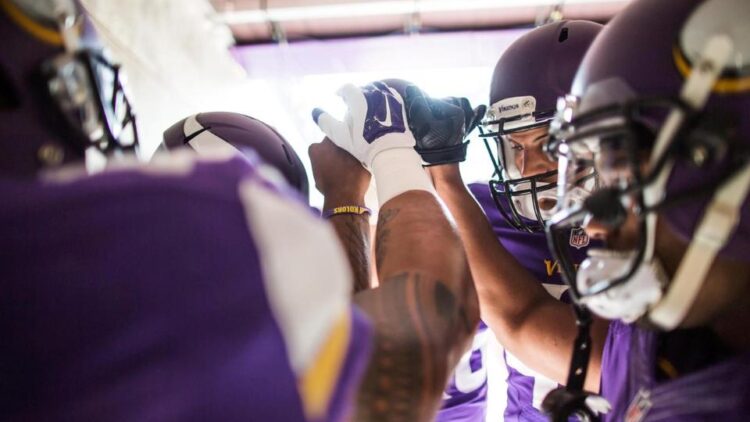 Last week, I wrote that the Norv Turner and the Minnesota Vikings need to let Teddy Bridgewater operate from the pocket, or, create moving pockets through roll-outs and play action. If the Vikings are going to be successful this season and beyond, they’ll need to ride those skinny knees of a healthy Teddy Bridgewater.

While play-calling helps minimize the effect of a defense’s schemes and blitzes, protecting the quarterback begins at the line of scrimmage with the offensive line and running backs — two of the most important positional groups heading into 2015.

Their importance has skyrocketed in recent days, most notably after the loss of Phil Loadholt during Saturday night’s preseason game against the Buccaneers. Loadholt suffered a torn achilles and will miss the entire season, which puts him at risk of being cut before 2016. As Adam wrote on Sunday, the Vikings have a few options to replace “Big Phil,” though the job at right tackle appears to be rookie T.J. Clemmings’s to lose.

So much relies on the Vikings’ group up front, and so much of that pressure falls on a select few players, from embattled left tackle Matt Kalil to newly-minted right guard Mike Harris. Can this reshuffled and retooled line live up to the test, or will Teddy Bridgewater end up battered and bruised like he was last season?

According to Football Outsiders, the Minnesota Vikings allowed 51 sacks in 2014, making them the 27th-worst pass-protecting unit in the league. The running backs, including Adrian Peterson, have admitted that their play in the passing game needs work, but the onus falls on the offensive line.

Of the group, Kalil was far and away the most unreliable, giving up 11 sacks through the first 10 games, per Pro Football Focus. Swelling in his knees contributed to his struggles, but it’s imperative that Kalil returns to his rookie form if the Vikings want to contend for a playoff spot. All indications through training camp and the first two preseason games point to a healthy, improved Kalil, but we can only speculate until the start of the season.

Next to Kalil, Brandon Fusco has made the switch from right to left guard, likely as a move to help Kalil shore up in pass protection. In an interview with CBS Minnesota, Fusco talked about his established chemistry with Loadholt and how he hopes to replicate that with Kalil in 2015:

“That’s the way I want to get with Matt, and that’s why we have training camp. And we’re gonna get to that point. It’s still early, there’s things we need to work on…. We’re not where we want to be yet, but we’re going the right way, (making) the right progress.”

As a veteran leader of the offensive line, Fusco appears to be the right fit next to Kalil, and will bring improved play over last year’s starter, Charlie Johnson. At center, John Sullivan is the anchor of a relatively young group who has been the Vikings’ most consistent offensive linemen since signing an extension with the team in 2011. After missing last Monday’s practice for the birth of his son, Sullivan received praise from offensive coordinator Norv Turner:

“John, I think he’s having a great camp,” Turner said, per 1500 ESPN’s Derek Wetmore. “He’s playing really strong and really physical. He’s been in this system now for a year and he and Teddy do a great job of communicating. They communicate in the running game, they communicate in our pass protections and he’s as smart a guy as I’ve been around.”

That stability will prove to be vital, especially when communicating with the completely overhauled right side of the line. Mike Harris, whose first playing time at right guard came last year against the Buffalo Bills, has looked solid in camp and seems to be holding his own against preseason competition. He’s a converted tackle with a massive frame, but is having a surprisingly smooth adjustment to blocking in the confined spaces created by playing guard.

Everyone’s biggest question, however, is how Clemmings will hold up at right tackle. The long-armed, nasty lineman was Loadholt’s immediate replacement and appears to be the starter moving forward. As many of our readers know, Clemmings is a first-round talent who fell to the Vikings in the fourth round amid injury concerns — an old foot injury scared teams away. He’s making the transition to the speed and power of the NFL earlier than expected, but Turner heaped praise on the former All-ACC tackle:

“He played well in the Hall of Fame Game. He gets thrown into action earlier in the game than he thought. I thought he played extremely well. He’s a young player with a bright future, and he’s going to have to step it up.”

Clemmings’ bright future goes hand-in-hand with the bright future of Teddy Bridgewater. If he, and the rest of the offensive linemen can improve on their pass protection from 2014, this team can make a surprising run into the playoffs this year. The question remains — will they?