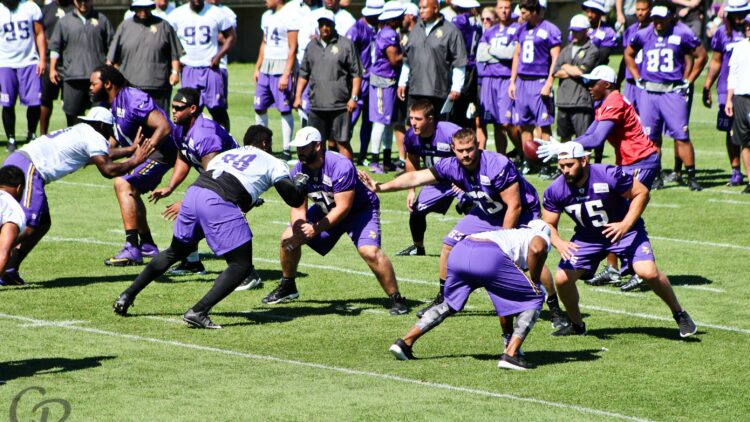 Every once in a while, one’s cynicism can mix with reality to create a sense of optimism during a turbulent time.

Following the news of Phil Loadholt’s torn Achilles that will almost certainly sideline him for the entirety of the 2015 season, my initial feelings were those of sadness for Loadholt as an individual, and also increased worries about an offensive line that was already this offense’s biggest liability.

For Loadholt individually, the situation downright sucks and he has a long road to recovery for the second season in a row. Next season is his last under his current contract and he will be set to make a salary of $7.75 million and, if no adjustments are made, the Vikings would only eat $1.75 million of that if they parted ways with him.

The idea that Loadholt has possibly played his last game as a Vikings might provide some readers with a shock, but the numbers suggest it is possible. Combine that with the fact that he’ll be thirty next year, with injuries continuing to wear on that large frame of his, and it might be closer to “likely” than “possible.”

At the very least, the silver lining in this situation is that Loadholt’s injury provides clarity in that a replacement is needed immediately. If one wants to be a true optimist, you may even go so far as to say the team can now potentially trade in some run blocking dominance for an improved pass blocker.

Of course, all of that optimism is totally contingent on finding an adequate replacement for Loadholt, and that is easier said than done. The Vikings brass are surely going to have their thinking caps on over the next couple of days, but what options exactly do they have to consider?

The Vikings first have to decide just how committed they are to keeping Brandon Fusco at left guard and Mike Harris at right guard. By all appearances, moving Fusco to the left side has been a success and left tackle Matt Kalil seems to be playing with more consistency compared to the beginning of 2014. Harris has also been playing well enough at right guard and the starting line seemed to be solidifying itself right up until Loadholt’s injury on Saturday evening.

If the Vikings are wanting to keep everyone where they are and simply find a man-for-man replacement for Loadholt, then Clemmings is likely the first man up. The rookie out of Pittsburgh isn’t entering the NFL void of injury concerns of his own, as evidenced by his slide to the fourth round, but his long and athletic frame are ideal for the tackle position at the NFL level.

Clemmings had been recruited as a defensive end out of highschool and only had the 2014 season worth of games to his name as a right tackle. He was widely successful, earning praise and a first round projection by many analysts, but it remains to be seen if he knows the position well enough to keep a franchise quarterback well-protected against the world’s best pass rushers.

If history is an indicator, the Vikings haven’t suffered their last offensive line injury of the 2015 season, and eventually they will be forced to shuffle things around like they did in 2014.

The Vikings have versatile enough players right now to consider a number of combinations, most of which would start with moving Mike Harris back to right tackle where he performed well enough when Loadholt missed action last season.

They could then start identifying in-house solutions for right guard, holding a competition for the spot. If Clemmings isn’t ready to be a starting tackle, then this option might be best in terms of building a dependably consistent line of protection. David Yankey and Joe Berger would count among the top candidates to fill any job opening at right guard.

At the moment, the free agent market at offensive tackle is a barren wasteland. The Vikings could potentially sign some depth off the streets, maybe find a guy or two with potential, but I don’t see them finding an immediate starter. They might luck into a decent option if they wait for teams to start making cuts in advance of the regular season, but that would be a bit of a gamble.

The one free agent name that is being widely tossed around, and for good enough reason, is veteran guard Evan Mathis. The former Pro Bowl guard was a cap casualty and has been weighing offers all offseason long, according to various reports.

Mathis will turn 34 during this season, but teams looking for a stop gap should certainly be considering him as an immediate option to boost their blocking unit. Mathis is expected to command a sizable pay check, which could be a hindrance for Rick Spielman and the Vikings, but a marriage doesn’t seem impossible here.

If the Vikings did sign Mathis, then Harris would almost certainly move back to right tackle, and Fusco might then move back to right guard. The hope would be that Mathis is still playing at a high enough level that the left side of Minnesota’s line would be just as good as they are now while the right side is bolstered to account for Loadholt’s absence.

Now more than ever, the Mathis-to-Minny crowd might be on to something.

The Vikings have enough talent at some other positions that they could be on the lookout for offensive line help via the trade market. Recent injuries have created a need for tight ends, and the Vikings have a few good ones right now. The team has some serious decisions to make at the wide out position in the near future and someone worthy of a roster spot may be sent packing simply due to the numbers game.

Rick Spielman also has a closet full of 2016 draft picks that are best kept on the hangers, but could potentially be used if the situation gets dire enough. Of course, as with any trade, a dance partner needs to be found and it is impossible to gauge the market right now with each team trying to narrow themselves down from 90 men to 53.

That is a terrible heading, because I have no conclusions to draw at this point, other than that the Vikings need to do something to replace Loadholt.

I also think this is an opportunity to provide Teddy Bridgewater with some improved protection, especially against speed rushers, and to find out which of our young linemen actually have what it takes to be that “next man up” at the NFL level… and which ones don’t.

The offensive line continues to be the biggest concern for Norv Turner’s unit that is otherwise bursting with talent. I’m not sure, to be perfectly honest, that I’m not full on board with the Evan Mathis crowd at this point.

I just want to see Bridgewater play a full 16 games and not have to run for his life on every other snap.