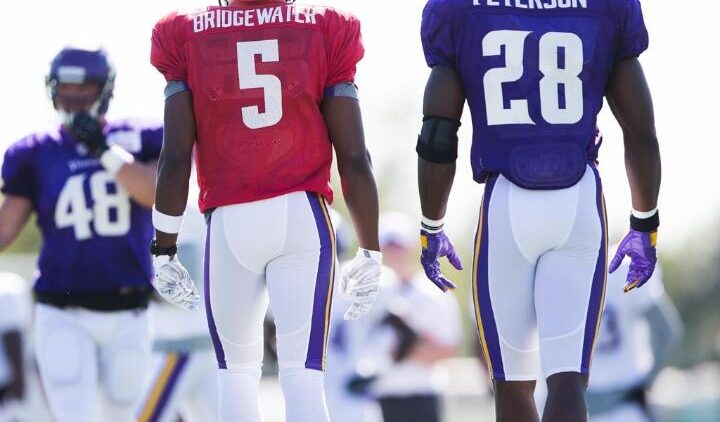 Peterson left practice yesterday after being stopped on a run play. Slow to get up initially, he did return to the field for one play before retreating to the locker room with medical staff.

“He got tangled up,” Jerick McKinnon said. “A defender fell on him, but he said he was all right. Everybody knows Adrian’s got a cape on. He’ll be back out here. I don’t think anybody’s worried about him.”

Peterson was later reported as having a thigh injury that wasn’t considered to be serious.

Today, head coach Mike Zimmer told media that he has “a little bruise” and although Peterson is being cautious at camp, it’s nothing to be concerned about.

Peterson: If it were regular season, “safe to say I’d play Sunday “

Andrew Krammer also posted via Twitter that linebacker Anthony Barr participated in team drills Wednesday. Barr, sidelined with a knee injury, has been basically ineffective at camp thus far. There was some confusion as to Barr’s status early last week, but it later became clear that the sophomore is continuing to nurse some inflammation of his left knee. The initial timetable for his return was uncertain, so it’s a great sign to see him back in practice.

Having both Peterson and Barr at full health will be prove key as the Vikings draw closer to the start of the regular season.

This is the type of news that we like.