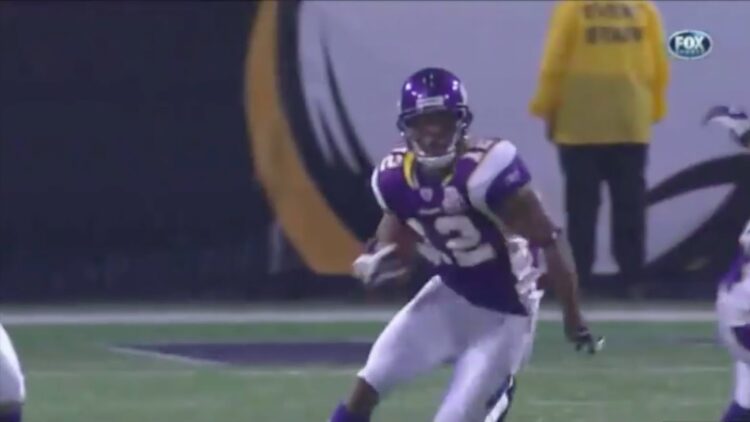 I know he is now three teams removed from being a Minnesota Viking, but for this hack blogger that named his dog after the 2009 Offensive Rookie of the Year, I can’t help but keep tabs on Percy Harvin’s NFL career.

Harvin left the Vikings via trade with a cloud of rumors and reports hanging over his head that indicated he was a bigger headache than the organization was willing to put up with. Then he was traded away from Seattle under suspiciously similar circumstances.

The reputation Harvin carries with him earned him the award of being Sports Illustrated‘s “most hated player in the locker room.”

“Seattle traded him to the Jets shortly after, and there weren’t a lot of unhappy folks in the Seahawks’ locker room when that happened,” reads the article.

Harvin is now a Buffalo Bill and if these labels bother him he does not let it show.

“I just ask people to judge me off of what they see, which is what I did in New York,” Harvin said during OTAs. “Which is why you heard nothing.”

When Harvin had his falling out with the Minnesota Vikings many fans, including myself, wondered how much of the drama had to do with media fabrication, incompetent leadership, and out-of-hand contract negotiation tactics.

It appears, however, that the Vikings did right by moving on from Harvin and the personality that resides under the helmet. That trade netted them a trio of draft picks, including a first rounder, and they did not have to invest a mammoth of a contract into a discontent playmaker.

The picks they received turned into cornerback Xavier Rhodes, offensive lineman Travis Bond, and running back Jerick McKinnon. By all indications, Rhodes and McKinnon stand to be more valuable players in 2015 and beyond than Harvin will be in Buffalo, unless there is a seismic shift of some sort.

Harvin was essentially replaced on the Vikings roster by Cordarrelle Patterson. Less than a year ago, Vikings fans were head over heels for Patterson, but his 2014 season was disappointing and he has been under a microscope this offseason.

Despite the ebbs and flows of the Vikings roster, it still looks like the Vikings got some great years out of Harvin before unloading him at exactly the right time.

Now, I have to go feed that dog.