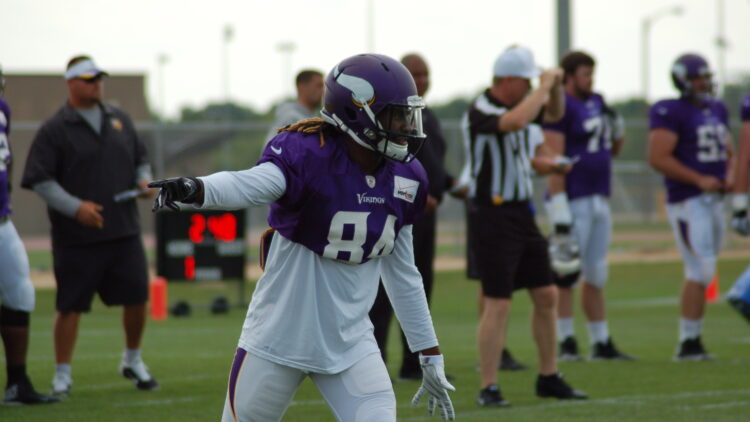 According to Matt Vensel at the Star Tribune, Cordarrelle Patterson didn’t think it was important to work out with the former NFL receiver that head coach Mike Zimmer set up for him, something Patterson says Mike Zimmer didn’t mind (h/t to @VikingsLifer for pointing it out to me).

He didn’t feel it was necessary to work out with the mystery former NFL wide receiver that coach Mike Zimmer set him up with, though he said he did chat with him at the Super Bowl and that Zimmer seemed cool with that.

“I feel like this is the best spring I’ve had all throughout my years,” Patterson said. “I’m just working hard, man. I’ve been talking in the past about my work ethic and just trying to get better in my routes. I feel like I’ve improved a lot.”

So long as it’s not a big deal, it’s not a big deal. If Patterson’s right about Zimmer’s reaction, that’s probably fine—but it’s still a little frustrating to hear as a fan who saw the team make a big investment into a receiver we knew was raw coming out of Tennessee.

The trainer he worked with in the offseason is someone who is evidently very good at instilling a mental conditioning program that gives athletes the mental fortitude they need to push through a season. I’m sure Patterson needed that, and I don’t think that’s a bad investment, especially if it makes him feel more prepared for the season.

He’s also not a receivers coach with extensive experience teaching route-running. Per Vensel again, but much earlier in the year:

Matrisciano, the one-time University of Memphis basketball team’s strength and conditioning coach, is a rogue figure in the billion-dollar fitness industry. He doesn’t own a gym. He doesn’t recruit, so no website, either. Getting his phone number isn’t easy. And if you actually come out to San Francisco, he isn’t going to beg you to stay.

He has been profiled by many publications, but he has refused to be photographed, either turning his back on the camera or wearing what looks like a ninja mask.

Matrisciano has trained everyone from boxers and triathletes to SWAT teams and special ops military personnel. But he is probably best known for his work with NBA All-Stars Blake Griffin and Zach Randolph, helping to take those two to the next level on the hard court by breaking them down and then building them back up in the soft sand.

Men’s Health’s profile of him reiterates much of the same thing: it’s not designed to improve a particular skill, but evoke a specific mental state.

To me, that’s no issue—I don’t doubt Patterson could use that kind of training. The point is that it’s not the whole of what he needs to do, and his offseason training so far hasn’t mentioned much outside work with a coach to improve his route-running, his biggest problem during the season. Which is to say that mental conditioning may be necessary, but it’s not sufficient.

It’s entirely possible that he found a different receiver-specific coach to work with, but aside from the fact that his offseason workouts have been unusually well-chronicled—he worked out with the “trainer from Hell,” Matt Matrisciano, for four weeks before April team workouts, then went back to Matrisciano for the four weeks until the June minicamps—there would be ample opportunity and incentive to mention an external trainer, even working with another NFL receiver (like Larry Fitzgerald).

It might be too much to be responding to a lack of information, but it’s also surprising that—if it were the case he was working with an external trainer—that Patterson would tell a reporter he didn’t work with the trainer set up for him without mentioning an alternative.

This could also be the reason the Vikings have been so reluctant to tell us who that receiver is (the dominant rumor seems to be that it’s former New England receiver Troy Brown)—because Patterson never worked out with him, and they didn’t want to let people know that. Maybe he worked out with Brown (or whomever), but that wasn’t the receiver that Zimmer set him to work out with. Still, I doubt it.

I don’t think Patterson isn’t taking things seriously, like he likely did in the offseason between his rookie and sophomore years. I’m just not sure he understands the vast gulf in skills between what he has and what he needs. Knowing one needs to work on route-running, hands technique and separation skills is different than working with someone who specifically can correct bad habits from forming.

Consider that one may not know why one is doing something wrong because it looks right. LeCharles Bentley, offensive line coach, is excellent at demonstrating this concept:

This will help you. There’s a difference between watching yourself and studying yourself. Studying is about examining…

Or, when one is forming bad habits without knowing it with intuitive but detrimental drills:

Pay close attention to the air pocket on the shoe. The issue with heavy OL not wearing a flat bottom or oly shoe while executing power movements/oly lifts is the air displacement at the sole. This creates an unstable surface that creates biomechanic & neurological hurdles that exposes athlete to injury. This doesn’t effect lighter athletes the way it does big guys. #TrainSmarter #Oline #OlinePerformance

The specifics of the videos aren’t important, of course (they are for offensive linemen), just the concepts behind training with what you think you know versus training with someone who can spot subtle problems that become big problems. Training in sand is probably pretty good for generic footwork, but is it good for receiver footwork? I don’t know, but I could see it causing issues even if it increases an athlete’s generic explosiveness.

As for whether or not he’s rejecting a gift, I don’t particularly care—whether or not someone should feel offended on Zimmer’s behalf is contingent on how Zimmer actually feels, which isn’t something we know.

Being a receiver is a skill. Not all receivers have the same skills the same ways (see: Stevie Johnson), but there’s no reason to forge your own path when you admittedly aren’t a pathfinder. I hope Patterson has improved his route-running, but I’m not sure he has based on what we know (and perhaps it’s not very much) that he has—not because he doesn’t want to, but because he doesn’t know how.