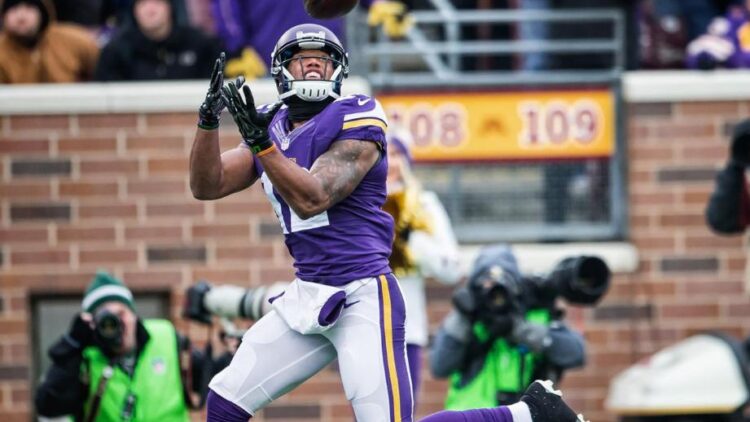 [Note:  This segment is a part of a position-by-position look at what the Minnesota Vikings might be inclined to do during the 2015 free agency period.  This is the seventh article, focusing on the wide receivers.  In case you missed it, feel free to check out the quarterbacks, running backs, tight ends, fullbacks, specialists and safeties.]

The 2014 season didn’t exactly pan out as planned for the Vikings when it came to the position of wide receiver. Going into training camp, there was tremendous belief that second year receiver Cordarrelle Patterson would have a break out season while taking his game to another level.

Patterson did take his game to another level, but unfortunately, it was a regressed level of play, which eventually caused Patterson his starting role on the offense.

The silver lining to the Patterson storyline is that the Vikings may have found a diamond in the rough in second year man Charles Johnson. Originally, a 7th round pick by the Green Bay Packers in 2013, Johnson seemingly developed promising chemistry with Teddy Bridgewater right out of the gate and ended up providing the Vikings with their most consistent threat through the air.

Although Johnson seems to be a player with a lot of promise, the uncertainty of the position created a belief that the Vikings should add a wide receiver to bolster Teddy Bridgewater’s arsenal.
Although I believe that to be true, I don’t necessarily believe that needs to happen with the 11th overall pick of the upcoming draft.

This leaves us looking to free agency in hopes of addressing the need. The Vikings have certainly had their big time free agency moves, but for the most part have maintained an even keel approach to the market. I don’t expect this strategy to change too much, knowing Rick Spielman prefers to build via the draft.

Looking at the list below found via sportrac.com, I wanted to highlight a few potential targets for the 2015 Vikings.

Obviously there are a few names that jump out at you immediately. Dez Bryant, Demaryius Thomas and Randall Cobb are all awesome options. However, let’s be honest, the chances that those players actually hit the open market are slim.

Beyond those three, there are names that would make an immediate impact to the offense, while also fitting the roster in terms of age and dollar value.

Jeremy Maclin, 26, Philadelphia Eagles:
Maclin had such a great 2014, he might actually command too much money to be a reasonable option for the Vikings. Not to mention the fact that Philadelphia has a pretty favorable salary cap situation and I’m willing to bet Maclin is their #1 priority for the off season.

Maclin would prove to be a tremendous asset to the Vikings. He provides an exceptional down field threat and would give the Vikings a consistent option at receiver.

Michael Crabtree, 27, San Francisco
I am self admittedly a big fan of Crabtree and I love the idea of having him in purple next year. San Francisco’s GM Trent Baalke said recently that the 49ers want to run the ball a lot next year. With that emphasis on the offense, I don’t see San Francisco committing a lot of money to Crabtree, who has had an up and down career as a Niner. Crabtree had a down, but decent 2014 and would likely only require a team friendly contract.

This seems like a perfect Rick Spielman free agency move: a player who is possibly looking for a fresh start with a new team and would potentially take a 1 year ‘prove it deal.’ Crabtree’s free agency likely depends on what happens with Bryant, Thomas, Maclin and Cobb. If the market is flooded with top receiving talent, he might have trouble finding a suitor.

Torrey Smith, 26, Baltimore Ravens
Letting a 26 year old wide receiver coming off of an 11 touchdown season would be a crazy thing for Baltimore to do, but crazier has happened.

Smith, although hauling 11 TDs, has had some consistency issues, but did average 15 yards per reception in 2014. Coming off of his rookie contract, Smith will likely look to cash in on his first big NFL contract, it all depends on who is willing to fork over the cash.

I wouldn’t want the Vikings to be a top bidder on Smith, but for the right price, he could help the Vikings stretch the field in 2015.

Cecil Shorts, 27, Jacksonville
Shorts is on this list because I feel like he presents a very likely candidate for the Vikings to pursue. Only 27, Shorts fits the Vikings roster in terms of age and because Shorts has battled through injuries the majority of his career, he wouldn’t command much money from the front office. He’s not necessarily a flashy signing, but I think Shorts could find a role with the Vikings.

I’ve long said I don’t think the Vikings add a receiver with the 11th overall pick in the upcoming draft. Regardless of Cooper’s talent and potential chemistry between Teddy Bridgewater and DeVante Parker, I don’t see Spielman drafting a receiver at that point.

In a maybe not-so-weird way, a lot of this is dependent on the Adrian Peterson situation. I do think the Vikings decide to retain Peterson at a discounted yet very high dollar amount. Because of this, I can’t imagine the Vikings are willing or able to commit a lot of money to a wide receiver.

However, with this essentially being Teddy Bridgewater’s team moving forward, you have to provide additional weapons for your young quarterback. Ultimately, I think the Vikings add a guy like Cecil Shorts or Michael Crabtree on team friendly ‘prove it’ type of deals.

Spielman has the Vikings in a good, not great situation as it is. We’re in a position where smart and economical free agency moves can absolutely help the team without heavy commitment from the organization. We should be happy we’re not in a position where we have to look to overhaul the entire roster via the draft and free agency. It might not be the most exciting approach, but practicality can’t hurt.