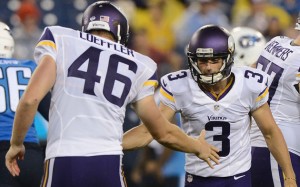 [Note:  This segment is a part of a position-by-position look at what the Minnesota Vikings might be inclined to do during the 2015 free agency period.  This is the fifth article, focusing on the specialists.  In case you missed it, feel free to check out the quarterbacks, running backs, tight ends, and the fullbacks are here.]

The Vikings are likely to see some movement this offseason when it comes to their key player on special teams.

To start, however, we should look at the one guy who seems about 99% safe in terms of job security. Kicker Blair Walsh is coming off of a down year in terms of consistency, but his body of work as a whole makes him more likely to get an extension this year than get replaced, by a long shot.  Walsh is entering the final year of his rookie contract and is scheduled to have a cap hit of only $689,483.

At age 25, it would take a huge fall from grace for the strong-legged Walsh to be considered anything other than our guy in the present, and well into the future.

Punter is a position that could be a little more murky.  In his second NFL season, Jeff Locke has mostly been a mix of inconsistent and terrible, but he shows just enough on occasion to leave Vikings fans hopeful for the future. Whether or not he gets a third season in Minnesota could end up being an interesting topic to track, however, as letting him go would only cost the Vikings $92,096 in dead cap space. If an upgrade can be found, then, it might be an easy swap to make.

In 2014, Locke ranked 23rd in the NFL with a punt average of 44.2 yards and also came under fire on multiple occasions for his holding duties on field goal tries. From a statistics standpoint, Locke’s low-ish average on punts has to be weighed against the fact that only three other NFL punters averaged better when it came to return yardage. It is possible that Locke is being coached to punt shorter to prevent return yardage, very likely in fact, but he still doesn’t pass the eye test far too often.

Here is the Spotrac list of free agent punters:

Brett Kern is the only name on this list to get really excited about, and there is a very good chance that he never even makes it to free agency. He is a clear enough upgrade over Locke that it really wouldn’t be too surprising to hear that the Vikings throw some interest his way in the opening days of free agency.

Still, the combination of giving up on Locke and signing Kern seems like a long shot to actually come to fruition, so adding a rookie punter as competition seems like the most likely route for the Vikings to take this year.

Long snapper Cullen Loeffler has been with the Vikings since they signed him him as an undrafted rookie in 2004, but his play is diminishing at the age of 34 and his contract has expired. I would say it is very likely that the Vikings move on from the long-time veteran and search for a youthful update.

Here the Vikings should have some free agency possibilities to fill the need. Here are the long snappers set to be free agents, according to Spotrac:

I think we can mark it down that Walsh is going nowhere anytime soon while Loeffler has likely played his last snap as a Viking. Loeffler has made headlines recently for starting an ice sculpting business, among other things, to help him transition to a post-NFL career.

The most interesting question is what happens at punter. I think the Vikings will at least apply some pressure by signing a low-level free agent or an undrafted rookie and, at the very least, provide a sense of competition through training camp. Of course, competitions have a way of producing surprising victors, so keep an eye on this one.