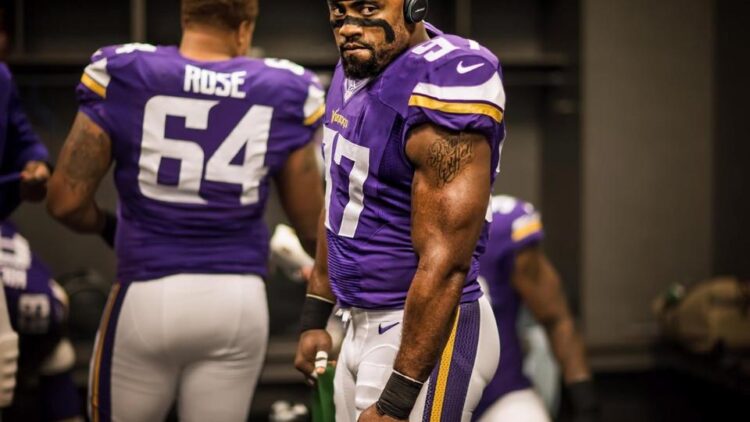 The losses of right tackle Phil Loadholt and center John Sullivan are major storylines heading into the Vikings’ season opener Monday night. Questions that weren’t as pressing before the preseason — “How many times will the 49ers sack Teddy Bridgewater?” — are now at the forefront of game previews and predictions as the start of the regular season draws closer.

Like others who follow and cover the team, my concerns are legitimate given the 49ers’ depth along the defensive line and defensive coordinator Eric Mangini’s penchant for blitzing opposing quarterbacks. Teddy Bridgewater could very well be in trouble Monday night, but Norv Turner will find ways to keep his quarterback upright, whether that means employing a quick-hitting pass attack with three-step drops or running the hurry-up to keep the defense off balance.

[quote_box_center]“The most glaring observation,” he wrote, “(was) Kaepernick’s inability to step up when he’s pressured. Often his first reaction to pressure was either to step sideways or backwards, not up in the pocket.”[/quote_box_center]

Kaepernick’s lack of pocket presence led to 52 sacks last year, and one Vikings defensive end looks to add to those totals on Monday night: Everson Griffen.

On Tuesday, Everson Griffen spoke to reporters after Vikings practice and focused a few of his comments on containing Colin Kaepernick:

[quote_center]”We can’t let Kaepernick get outside the box and scramble and let him create plays with his feet. He’ll hit you long and deep if you let him get out there and scramble. Our biggest thing is to keep him inside the pocket and hit him where it hurts.”[/quote_center]

Against Kaepernick, Griffen’s game plan is sound. The 49ers are at their best when they pound the football and let Kaepernick make plays with his feet. According to Matt Maiocco of CSN Bay Area, Kaepernick had the most time to throw (2.96 seconds) among all quarterbacks last year, yet took far too many sacks because of his indecisiveness.

On the play above, in a Week Nine loss to the Rams, Kaepernick opens to his right, hitches before throwing the football, and tucks before rolling out of the pocket. The subsequent movement results in a Robert Quinn sack/fumble and turnover in favor of the Rams. I included this particular sequence because it’s indicative of Kaepernick’s style as a passer — frantic.

When Kaepernick’s first read is covered, he hesitates and panics, leaving the pocket before reading through his full progression. This season, the 49ers field Torrey Smith, Anquan Boldin, and Quinton Patton as their primary receivers, and that group shouldn’t scare Mike Zimmer. With Xavier Rhodes, Terence Newman, Captain Munnerlyn, and Trae Waynes lined up opposite them, Colin Kaepernick could be in for a night of scrambling and escaping the pocket.

That’s where Everson Griffen comes in. He was one of Pro Football Focus’s top rated 4-3 defensive ends last season (8th out of 59) and proved to the Vikings he deserved his five-year, $42.5 million contract signed in March 2014. Not only was he the team’s best defensive end, racking up 12 sacks in his first full season a starter, he was also the defense’s emotional leader and pace-setter.

Now, he has a chance to make an early impact, starting with the first game of the 2015 season. Griffen has the power, and surprising speed, to contain some of the game’s more elusive quarterbacks. Take a look at the play below, from the Vikings’ 2014 matchup against the Washington Redskins:

Here, Griffen does what defensive ends are taught to do when the tackle blocks down — he replaces the offensive player while keeping his shoulders square to the quarterback. By doing so, he has an angle to stop a potential run or contain the outside shoulder of a rolling quarterback (which happens here.)

Don’t be surprised if the 49ers employ similar looks, with play action passes to get Kaepernick outside of the pocket. Griffen was in perfect position, sensed RGIII’s hesitation, and attacked his outside shoulder. The aggressive play forces RGIII to tuck and run, and Griffen uses his athleticism to bring the quarterback down for a sack.

Plays like this were common for Griffen in his first year under Mike Zimmer. In Zimmer’s scheme, defensive ends are asked to contain the run before aggressively rushing the passer. It’s clear that Griffen took these lessons to heart, often playing with calculated conservatism before unleashing swim moves and other pass rush moves.

This next play, a sack of Carolina Panthers quarterback Cam Newton, is one example of Griffen’s power (and looks somewhat similar to the Quinn, Kaepernick fumble above):

Cam Newton is one of the league’s strongest, biggest quarterbacks at 6′ 5″, 245 pounds, making him one of the hardest to bring down in the pocket. Griffen, a 6’3″, 273-pound ball of muscle, sacks Newton with ease after executing a perfect speed rush on left tackle Byron Bell. As soon as Newton hits the top of his drop, Griffen is at his back, giving the Panthers’ quarterback no time to make a decision with the football.

The 49ers’ left tackle, perennial Pro Bowler Joe Staley, is lightyears ahead of Bell, but Griffen has had success against a number of premier left tackles. I’d argue that Newton is a better, more productive passer from the pocket than Kaepernick, and I see no reason why a clean pocket will aid Kaepernick if he can’t make defined reads and throws within the structure of the called play.

Most likely, Kaepernick will hitch, sit in the pocket, and try to escape at the last moment. Griffen,  along with the rest of the Vikings’ defensive line, should have no problem putting the pressure on Kaepernick, especially with Mike Zimmer’s mix of A-Gap blitzes and pressure packages.

Even when he’s given outlet throws and opportunities to get rid of the football, Kaepernick has shown he’d rather make plays than take the safe option: Admittedly, Kaepernick isn’t left with much of a choice this situation. His right tackle was beat immediately at the snap, his right guard is on the ground watching a defender close in on Kaepernick, and the left side of the line is completely collapsed. Vernon Davis, meanwhile, is wide open in the flat, but Kaepernick fails to see him leaking out of the backfield.

A quarterback with better awareness and the ability to keep his eyes downfield in the face of a rush would’ve seen this and completed the pass moments after this screen grab. But Kaepernick isn’t that player, and the Vikings have talent along the defensive line and at linebacker that’s comparable to that of the Seahawks.

Anthony Barr, Everson Griffen, Brian Robison, and even Eric Kendricks are legitimate pass rush and blitz threats, and I expect Mike Zimmer to pressure Kaepernick constantly on Monday night. Of those players, I expect Griffen to be the beneficiary of a ferocious effort up front. His stats will only be helped by the play of Sharrif Floyd and Linval Joseph inside, who are both known for their quick get-offs and pass rush techniques.

When you tune in Monday night, pay close attention to Everson Griffen. Specifically, focus on these points:

If he, along with the rest of the defense, can’t do those things, Vikings fans may be in for more of this from Kaepernick:

Knowing Mike Zimmer and Everson Griffen, that won’t be the case.