Year 1 of the O’Connell Era Had a Painful Reality

The numbers, pundits, theories, and efficiency metrics were correct: the 2022 Minnesota Vikings were an average team disguised — somehow — with a 13-4 win-loss standing.

It sounds unfathomable to the eardrums, but indeed, Minnesota’s gumption to “survive and advance” all regular season was a fun, exciting, and unexpected smokescreen. The team was not built to contend for a Super Bowl, although midseason wins at the Washington Commanders — especially the 4th quarter of that game — and at the mighty Buffalo Bills the following week did a marvelous job of luring fans into an “it’s time to start believing” motto.

Year 1 of the O’Connell Era Had a Painful Reality

Of course, this is only discernible now because the Vikings lost to the hungry New York Giants in the Wildcard Round at U.S. Bank Stadium, 31-24. Hindsight is a fabulous tool to assert “here’s the deal” facts. Vikings fans tentatively strutted into the postseason hoping all 11 one-score wins were a forecast of destiny.

But they were not.

The squeaker wins were bait to get you invested in an overachieving team with a heart the size of Jupiter. In decades past, 12+ win Vikings teams would waltz into the postseason showcasing high expectations, with fans pounding their chests and optimism oozing everywhere. This year, though, fans were skeptical about the franchise’s inability to wipe any team off the map and instead surmised, “well, maybe this is how the Vikings win a Super Bowl — when you see it coming the least.”

The cold hard truth is the 2022 Vikings needed to bash a few teams in the skull merely to prove legitimacy. They didn’t, and folks chose to believe that was meaningless.

Well, it wasn’t meaningless; it was a billboard-flashing hint.

You see, the first-year-O’Connell Vikings ranked 27th in the NFL per Football Outsiders’ DVOA metric. DVOA doesn’t objectively care if a team is good or bad — it’s math. It told anyone who would listen for most of the season that Minnesota was a team winning above its means. We just chose to decry its validity because it was inconvenient for our emotions. Yet, the advanced stats — or “analytics” — were not-so-subtly painting a picture illustrating that the Vikings were not very good. DVOA screamed to readers that Minnesota should have one and done tattooed on its face. But that hurt our feelings.

Were the 2022 Vikings a lost cause, tease, or useless enterprise? Nope. A first-year head coach fired up the best season in franchise history by a, well, first-year head coach. O’Connell laid a foundation and culture directly in contrast to the inflexibility, mediocrity, and stalemate of the previous regime. You need not prance in the 2023 regular season assured to encounter dull 8-9 or 9-8 purgatory.

Still, an element of irreversible disappointment is palpable because the 13-win team lost a home playoff game to a team with a roster devoid of Super Bowl-caliber talent. Here’s a secret: the Giants aren’t very good. They played great against the Vikings defense on Sunday, but every team in 2022 played wonderfully versus Ed Donatell’s defense when it did not force turnovers. The Giants were merely the flavor of the week, and voila, the Vikings didn’t force turnovers. The Giants will probably get spanked by the Philadelphia Eagles next week, a team ranked third in DVOA. Why? Because New York’s DVOA is 22nd in the NFL — five spots higher than the Vikings.

O’Connell told reporters after the game, “There were real tears in there. There are guys that expected to have a chance to win a world championship. You’ve got to give the Giants a lot of credit.”

Just like you, Vikings players convinced themselves that the one-score undefeated supremacy in the regular season was a precursor to destiny. While the 2022 campaign was eternally memorable, it was one season-long hint that Minnesota could not beat anybody handily and therefore had a postseason comeuppance around the bend.

You may not like “the numbers” or “the analytics.” But they did not lie. 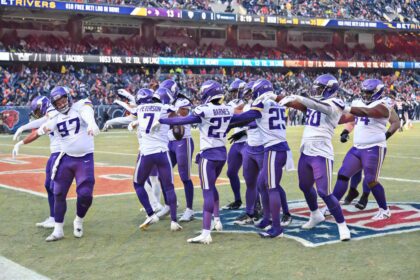 Also Read:
2 Vikings Free Agents Will Be Heavily Sought After