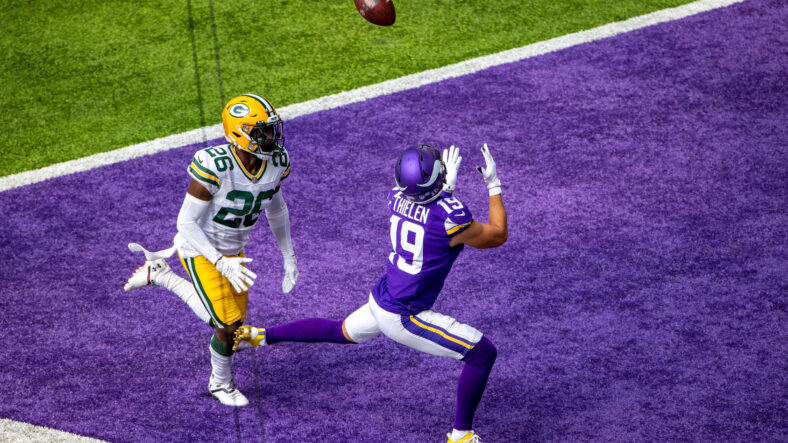 The Vikings opener is finally just days away, and what an exciting late afternoon/early evening it should be at U.S. Bank Stadium. There is more anticipation for this opener than any in recent years based on the new Vikings coaches with their different offensive and defensive schemes, some talented additions, especially on defense such as Za’Darius Smith, and of course, the archrival Packers coming to town as the three-time defending NFC North champs.

“I’m well aware of the importance of this football game for our team,” Kevin O’Connell said in advance of his first regular season game as Vikings head coach. “But I also think it’s important to know we’re not getting into the playoffs or not by the outcome of Sunday. We want to play the right way, and from what I’ve seen of our team and my expectations for our team, I expect things to go well.”

While I agree with O’Connell that the opener won’t make or break a 17-game season, I think if the Vikings are going to challenge the Packers for the division title, they need to win this game as it will be very difficult to win at Lambeau Field in the New Year’s Day rematch. And it’s hard to surpass a team in the standings that sweeps the two regular season games.

Both teams won at home last season—the Vikings in a thrilling 34-31 shootout in Week 11 and the Packers in dominating fashion 37-10 at cold Lambeau in early January with Kirk Cousins out due to Covid. I expect a close game and lower scoring on Sunday after neither team played their starters much, if at all, in the preseason.

The Vikings appear to be the healthier team, with only defensive end Jonathan Bullard and safety Lewis Cine limited in practice on Thursday. The Packers had four players limited (including their Pro Bowl offensive tackles David Bakhtiari and Elgton Jenkins and two other starters—tight end Robert Tonyan and safety Darnell Savage), and starting receiver Allen Lazard has not practiced this week after getting stepped on in practice.

Here are my keys to the Vikings beating the Packers:

1. The offensive line—especially center Garrett Bradbury and rookie right guard Ed Ingram—must play well against a stout front seven. Nose tackle Kenny Clark has given Bradbury fits, so look for the Vikings to double team Clark with Ingram or left guard Ezra Cleveland helping Bradbury. The strength of the Vikings O-line is the Brian O’Neill and Christian Darrisaw tackle twosome, and they will be tested by two excellent edge rushers in Preston Smith and Rashan Gary.

2. Effectively mix the run and pass in O-Connell’s debut as play-caller: Dalvin Cook has had some big games against Green Bay, and he’s fresh after no preseason snaps. The Vikings O-line needs to give him some running room so he can be effective enough to keep the Packers D from overplaying pass defense. And Cook also will be featured in the passing game on screens and swing passes. Alexander Mattison will need to be effective in relief of Cook, especially in Week 1, when fatigue can be a factor.

3. Cousins must be protected so he has time to hit his excellent receivers, as he did when he threw for 341 yards and 3 TDs while only being sacked twice in last year’s home win. I’ll be watching the matchup of two Pro Bowlers—Justin Jefferson against Jaire Alexander. Jefferson had eight receptions for 169 yards and 2 TDs in the game last November, but Alexander was out with an injury.

4. Thielen, Osborn, Cook, Irv Smith Jr. Factor: O’Connell talks of Jefferson lining up “in a lot of spots, that’s no secret.” O’Connell will need to scheme Jefferson open (as he and Sean McVay did at the Rams with Cooper Kupp). J.J. will attract a lot of attention and double teams, which can set up Adam Thielen, K.J. Osborn, and Smith with opportunities to make big plays.

5. Protect the football: the Packers were one of the league’s top teams last year in forcing turnovers. It will help the cause if the Minnesota defense forces a couple of turnovers — never easy against Aaron Rodgers.

6. On D, control the Packers run game led by two fine backs in Aaron Jones and A. J. Dillon. Harrison Phillips and Dalvin Tomlinson must anchor the run D and free up two excellent linebackers in Eric Kendricks and Jordan Hicks to make tackles along with Harrison Smith and Cam Bynum from their safety spots.

7. Then unleash Danielle Hunter and a vengeful Za’Darius Smith (against his former team, who he says treated him like a “nobody” when he was hurt last season). If Bakhtiari and Jenkins are rusty or get fatigued after limited work in camp or if they are held out, it could be a field day for Hunter and Smith. But they also will need relief from D.J. Wonnum and Patrick Jones. This rotation could be a big factor in the game, but Rodgers has one of the NFL’s quickest releases, so they need to get to him fast.

8. Hope Rodgers and his new receiving corps are not yet in sync: Davante Adams has been a Vikings-killer for several years (18 catches for 251 yards and 3 TDs in the two games last season). Now he’s in Vegas, and deep threat Marquez Valdes-Scantling signed with the Chiefs. Rodgers always seems to find a new target and if Lazard is out, he’ll look to vets Sammy Watkins and Randall Cobb and rookies Christian Watson and Romeo Dobbs. Again, the pass rush is crucial, and the secondary has to make plays. I expect Rodgers to go after corner Cam Dantzler early and often, so he’ll need to play well and get safety help.

9. Special teams can be the Vikings difference-maker. The Packers struggled last year with their coverage teams, and a blocked punt was the key play in their playoff loss to the 49ers. They hired Rich Bisaccia (and made him the highest paid special teams coach) to fix things, but the Vikings provide a challenge with a terrific kickoff returner in Kene Nwangwu (two TD returns last year) and recently acquired Jalen Reagor has had success as a punt returner.

Kicker Mason Crosby is coming off an inconsistent year with nine missed field goals, and he had offseason knee surgery, so he didn’t kick much in camp. It appears Vikings kicker Greg Joseph has the edge here and greater range with many 50-plus yard field goals on his resume.

Jeff’s Prediction: I think both offenses will struggle early on since they didn’t play in preseason games as a unit. The second half should be more wide open. We know the Packers defense is potentially top five in the league and has added two No. 1 picks in defensive tackle Devonte Wyatt and linebacker Quay Walker. They likely will be more impactful in the late-season matchup. Yet Cousins has had success against the Pack (4-3-1 record) when he has time to throw.

It will be interesting to see the approaches of O’Connell and defensive coordinator Ed Donatell—how aggressive will they be? Will O’Connell be a coach who goes for it often on fourth down? Will Donatell blitz Rodgers, which can be problematic with his smarts and quick release?

I’m picking Green Bay 22-20 based on the Packers’ greater experience playing together under their schemes compared to this maiden voyage for the new-look Vikings on offense and defense. But it won’t surprise me if the Vikings win with a boisterous home crowd cheering them on.  Regardless of who wins this game, I still see the Vikings going 10-7 and making the playoffs if Hunter, Za’Darius Smith, Cook, and Jefferson stay healthy and if Cousins has a really good season. But as I said, the Vikings likely need a victory Sunday to challenge the Packers for the NFC North title.

1. Several intriguing games this opening weekend, including these four matchups that interest me the most:

Eagles at Lions: We keep hearing the Lions will be much improved, and I agree that their talent level is on the rise, but Philly (the Vikings road opponent on Monday night in Week 2) has enough high-level talent (especially at wide receiver with A.J. Brown and DeVonta Smith) to knock off Jared Goff and the Lions.

Buccaneers at Cowboys (Sunday night): Tom Brady loves to be doubted, and after his surprising mid-training camp hiatus coupled with offensive line departures and injuries, there was a lot of negative talk about the Bucs offense. I think Brady rises up with a win in Big D against the overrated Cowboys.

Broncos at Seahawks (Monday night): High drama in Seattle with the return of Russell Wilson to lead a talented Denver team. It’s a mismatch with Russell vs. Geno Smith, Seattle’s starting QB as of now, so I’ll take the Broncos.