Fun-Loving Vikings Face Big Test vs. Bills — with or without Josh Allen 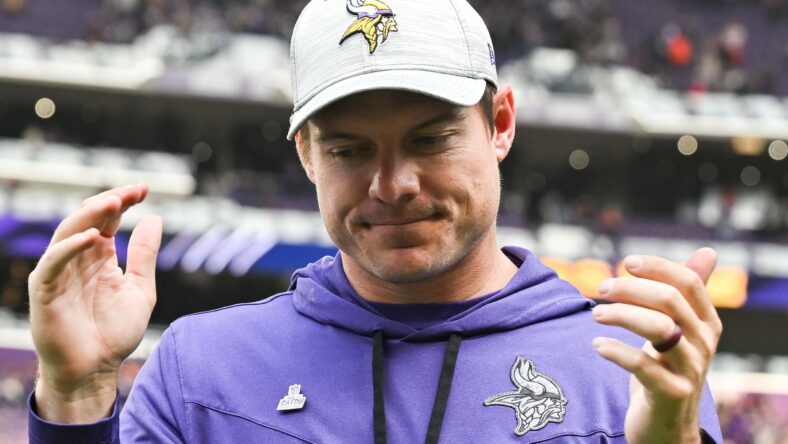 “When you’re winning, there’s a little more wind at your back… it’s always fun to win,” so said Kirk Kirko in Chains Cousins this week as the Vikings prepared for their biggest test of the season on Sunday — at Buffalo against the AFC’s current No.1 seed.

Winners of six straight games, the 7-1 Vikings will battle a 6-2 Bills team that will be highly motivated after last Sunday’s 20-17 loss at the Jets. Buffalo’s division lead is just a half-game over the Jets and Dolphins and one game up on the Patriots, as all four AFC East teams have winning records.

Conversely, the Vikings enjoy a commanding 4 ½ game lead in the NFC North and are having lots of fun on plane rides home after their most recent road wins at Miami and Washington. Thus, Cousins has surprised Vikings fans by showing his fun side, wearing chains, and dancing away in-flight.

I was, fortunately, part of a lot of winning teams in my NFL front office years, and I can tell you it definitely is much more fun to come to work or hop on the plane ride home — for everyone connected with the team — when you’re on a roll, especially a playoff run. I’ll always remember our Vikings team knocking off top-seeded San Francisco and Joe Montana in 1987, and everyone on that flight home was on Cloud Nine — the same thing happened with our playoff run in Tennessee in 1999 after beating Jacksonville in the AFC Title game.

The big question this week is whether Bills Pro Bowl quarterback Josh Allen will be able to play with his injured elbow. Coach Sean McDermott says Allen is “day to day,” and ex-Vikings QB Case Keenum will start if Allen can’t go.

I expect Allen to play since he finished the game last week, given that the Bills are coming off a loss that has tightened up the AFC East race. Plus, staying ahead of the Chiefs and gaining the top seed in the AFC is of utmost importance, so in all likelihood, it would be Kansas City coming to Buffalo in late January for the AFC title game as opposed to last year when the teams met in a memorable overtime thriller won by the Chiefs in K.C.

Another factor in McDermott’s mind could be that the Bills next two opponents are losing teams — the Browns and Lions so if Allen’s elbow is problematic, he could sit out one or both of those games.

Allen reminds me a lot of our QB during my Titans years — Steve McNair. They’re both big and strong (Allen is 6-5, 240) and excellent runners, along with their passing skills. Steve often battled injuries that would force him to miss an entire week of practice, but he would do all the walk-throughs and mental reps and start on Sunday (which invariably led us to victory). I could see Allen doing that this week.

“We have to prepare like he’s going to play,” Vikings Coach Kevin O’Connell said. “I have a lot of respect for Case, and their offense won’t change that much with Case. Josh Allen is one of the best players in our league with what he’s able to do and how he affects a game. The Bills are such a talented team, so well-coached. We feel very strongly about our team, that has a lot of confidence, but it’s a heckuva challenge. We’re going to have to be razor sharp.”

Translation: it’s going to be a tough game against either Allen or Keenum with the overall talent of the Bills, but O’Connell would much rather face Keenum.

Here are my keys to the Vikings upsetting the Bills:

1. First would be Allen not playing or being limited so he doesn’t run as often.

2. The Bills have been turnover prone lately as for the fourth time in the last five games, they committed two turnovers on Allen interceptions in the loss to the Jets and now have 14 giveaways through eight games. That’s good news for the Vikings, who rank second in the league with a plus-6 turnover ratio. Winning the turnover battle is always critical, so Cousins and his offensive mates need to protect the ball (against the league’s No. 3 defense in takeaways with 15), and the Vikings D (14 takeaways) needs more big plays such as Harrison Smith’s fourth-quarter interception that was a game-changer in Washington.

3. If Allen plays, unleash a strong pass rush led by Za’Darius Smith (8 ½ sacks) and Danielle Hunter (5 sacks) but be ready to shut down the Bills running game, as they may try to protect Allen if he plays by running it more often with the backs or take the same approach if Keenum starts. With Dalvin Tomlinson (calf) likely to miss his second straight game, the Vikings would be without one of their top run defenders inside, but nose tackle Harrison Phillips is facing his former team and will be looking to have a strong performance.

4. We know Bills top receiver (and former Vikings star) Stefon Diggs will be fired up to face his former team. The Bills will try to get him matched up with Vikings rookie corner Akayleb Evans who had a great game against the Commanders when he relieved Cam Dantzler, who is unlikely to play (ankle). The Vikings need to give Evans help on Diggs while being wary of deep throws to Gabriel Davis (4 TDs, 25.7 average on his 18 receptions).

5. Run the ball effectively: speaking of fired up, Dalvin Cook will play against his younger brother James (the Bills No. 2 back) for the first time. The Bills gave up 174 yards rushing to the Jets last week, and the Vikings want to get Cook and their run game back on track after a rough day against Washington’s talented front four. Buffalo may be missing their top tackler in linebacker Tremaine Edmunds and another excellent linebacker, Matt Milano, who didn’t play last week (oblique) but practiced fully on Thursday.

6. Keep throwing the 50-50 balls to J.J. and Hockenson over the middle: This has been a good evolution in Cousins’ game that he is more willing to give Justin Jefferson a chance at contested catches, especially on the rare occasion that he faces single coverage. It paid off in Washington several times, including the opening drive TD. Tight end T.J. Hockenson already has proven to be a great addition with his ability to catch balls over the middle and loosen things up for the Vikings wide receivers.

Bills all-pro safety Jordan Poyer (who has four interceptions) missed practice this week (elbow), so that could play to the Vikings advantage in the passing game along with their second-best pass rusher Greg Rousseau (5 sacks) also missing practice (ankle).

7. Keep Von Miller off of Cousins: The future Hall of Fame defensive end has seven sacks and continues to be a game-wrecker as he was in Denver and last year on the Rams’ title run. He’ll likely move around some but will more often rush against left tackle Christian Darrisaw who O’Connell says is “having a great year with consistency in pass pro and cleans up when something else happens in the pocket.” This is perhaps the biggest test of Darrisaw’s first two years in the league.

Also, guard Ed Ingram will likely need help inside against former first-rounder Ed Oliver (and if he is unfortunate enough to go against Miller at some point like the Vikings do when they have effectively put Za’Darius Smith over a guard or center in passing situations).

8. It will be a test for the kicking game in a cold stadium with snow possible on Sunday. So it will be a challenge for kicker Greg Joseph and punter Ryan Wright who are both coming off good games in Washington. And the Vikings coverage units need to play well, which they’ve done most of the season, and not allow a long return which they did on the second-half kickoff last week (45 yards by Antonio Gibson). A big return by Kene Nwangwu or Jalen Reagor also would help the cause.

Jeff’s Prediction: The Bills are the consensus Super Bowl favorite, and beating them in Buffalo is a big ask. They have the NFL’s No. 3 offense per points-scored that would be weakened without Allen’s great arm and running ability which is a big part of their offense. If Allen is out along with several other key players, it improves the Vikings’ chances to win (and the line has moved from 6 ½ to 3 ½ this week due to uncertainty about Allen).

I’m picking the Bills 23-20, whether Allen plays or not, mainly due to the Bills top-ranked scoring defense (allowing only 14.8 points per game), but that also would be weakened if several key defenders are out. So I won’t be surprised by another Vikings fourth-quarter rally to what would be a huge victory and more “Kirko in Chains” Cousins’ video from the plane ride home.

2. Can the Packers fall to 3-7 this Sunday when their ex-coach Mike McCarthy brings his 6-2 Cowboys to Lambeau? I say yes, as Dallas is loaded with talent, and likely Defensive Player of the Year Micah Parsons will be all over the frustrated Aaron Rodgers. Plus, the Packers have not been good against the run (ranked 26th), and Dallas’ 12th-ranked rushing attack gets Ezekiel Elliott back from a knee injury to rotate with Tony Pollard. The Vikings will watch with great interest as they’d love to see another Packer loss, and they host the Cowboys next week.

3. Another Week 10 game I find interesting pits two division leaders in London — surprising NFC West-leading Seattle vs. a disappointing Bucs team sitting 4-5 but leading the lousy NFC South. I think Brady and the Bucs D will find a way to win a close game.