Three Vikings That Could Be Playing Their Final Game in Minnesota 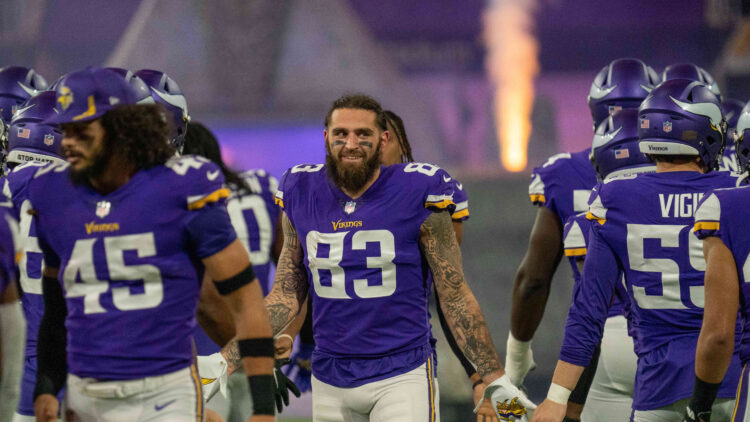 The final game of the Minnesota Vikings 2021 season has been relegated to meaningless, other than a little bit of shuffling in the NFL Draft order. That said, with the salary cap hell that Minnesota finds itself in this offseason, they may be making some difficult financial decisions. Because of this little predicament there are multiple players who could be playing their final game in the purple and gold.

After Irv Smith’s injury before the season began, the Vikings went into the 2021 season with some serious questions at the tight end position. It wasn’t always perfect, but Tyler Conklin stepped in and made some tremendous steps towards being a very good tight end in this league.

With that, he will likely see a number of calls this offseason with contract offers from other teams. There’s always a chance that the Vikings, knowing Irv Smith is going to return in 2022, let him walk to save money. Personally, I would love to see what the offense can do with both Conklin and Smith at the tight end position.

After the 2020 secondary was one of the weakest areas of the Vikings roster, it was the main focus of free agency for Rick Spielman. One of those acquisitions included bringing back a familiar face, Mackensie Alexander returned to the team after a one season hiatus in Cincinnati.

That said, the return hasn’t exactly been all sunshine and rainbows. Alexander has spent many games this year a step behind the slot receivers of opposing teams when he’s been meant to be a veteran anchor on the defense. Combine that with the fact that Minnesota will likely be looking for CBs at some point in the draft, and Alexander is likely gone after this season.

Yes, Garrett Bradbury had arguably the greatest reception of the NFL season in Week 17. That said, he’s not paid to be a wide receiver or a tight end. He’s paid to be a center, and that has not been a strong suit for him in the 2021 season. Bradbury has struggled to keep defenders in front of him at times and not in Kirk Cousins’ face.

On top of that, the Vikings could be faced with a chance to draft one of the best center prospects of recent memory, Tyler Linderbaum. There’s a chance Minnesota’s pick ends up being too high to warrant taking a center, but if they get a win in Week 18 and end up in the mid-first round, this would be a terrific direction to go in. With that, it wouldn’t be unsurprising if Bradbury is playing his final game for the VIkings.