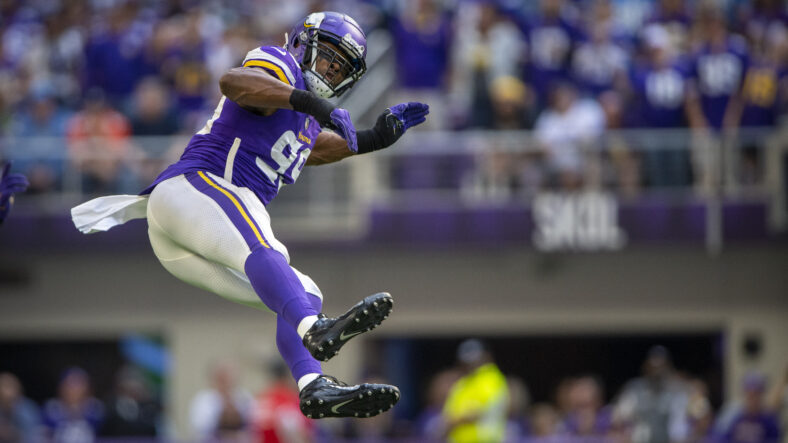 This has been a big talker lately and likely will be for a few more weeks. Let’s break down Sam’s question. First of all, yes. The Vikings can convert Danielle Hunter’s $18M (5th day of the new league year) roster bonus into a signing bonus automatically without player consent. They have automatic conversion rights.

However, prorating the bonus to spread out the cap hit won’t make the team salary cap compliant before the new league year. The team will have to make at least one more transaction.

Converting the bonus will save the Vikings $13.5M in cap space. That leaves about $2M the team will have to clear before 3pm CST on March 16th. Hunter’s cap hits AFTER the roster bonus conversion would be as follows:

That leaves two VERY reasonable cap figures for the next two seasons. I do feel the need to point out his cash flow in year two is minuscule, leading one to believe a new contract could be negotiated before the 2023 season, assuming Hunter is retained and remains healthy. More on Hunter shortly.

Jack, I’m sorry to inform you, but the Vikings cannot afford you right now. They’re currently about $15 million OVER the cap, so they couldn’t even pay you $12. In a few weeks, that’ll change, but I’m guessing they’ll target someone with more NFL experience. No offense.

Let’s take a look at the top-heavy cap distribution. This is going to be where the Vikings get their money this offseason. Kirk Cousins and Danielle Hunter are the elephants in the room. I’d put the likelihood of their cap numbers being adjusted this offseason at about 100%.

As discussed earlier, converting Hunter’s roster bonus to a signing bonus saves the team $13.5M in salary cap space. Trading him would save $14.64M. A restructure of Cousins’ contract can save up to $27M while trading him frees up a maximum of $35M. An extension for Cousins will likely be in the $36M-$40M/year range.

Beyond those two, Adam Thielen is a clear restructure/pay cut candidate. A base salary to signing bonus conversion could create up to $7.35M in cap space. However, this type of restructure would skyrocket Thielen’s cap hits in 2023 and 2024 to over $20M/year. Thielen produced when healthy (10 receiving TD’s in 13 games), but coming to an agreement on a re-worked deal that lowers his 2022 cap hit, his future cap hits, and includes guaranteed money and incentives seems like a more realistic option for both parties.

I don’t see the contracts of Eric Kendricks, Harrison Smith, and Dalvin Cook being adjusted this offseason. If a move were made with Smith, it would likely be made before March 20th, when he’s due an $8M roster bonus and $2.95M of his base salary guarantees.

Michael Pierce is a potential cap casualty, perhaps with a post-June 1st designation, but I’m not sure that’ll be needed.

Anthony Barr becomes a free agent at the start of the new league year. The $9.89M cap charge is dead money that was created by adding two void years to his contract last year.

Brian O’Neill was just extended, and Dalvin Tomlinson has a pretty fair cap figure, so I don’t foresee any changes with those two.

I honestly don’t see anyone deserving of an extension at this point. Maybe Tomlinson after the season, but it depends on how 2022 goes. It’s important to remember that Justin Jefferson is next in line to get the bag, so it’s never too early to start budgeting for his potentially massive payday.

Michael Pierce has a cap hit of $10.5 million in 2022. Using my Mankato Math, I determined McChickens cost $1.38 including tax in Minnesota. That equates to over 7.5 million McChickens. 7,608,695, to be exact. That’s enough to feed roughly 84 people for their entire lifetime (3 meals a day for 82 years). They would clearly be malnourished because of the 100% McChicken diet, but man, I LOVE McChickens, and I’m not too keen on aging defensive tackles, so there’s no question I’d choose the McChicken route over paying Pierce for a season 🤷.

I’d argue the easiest procedural move for creating cap space would be converting Danielle Hunter’s roster bonus into a signing bonus. Cutting Pierce would be fairly easy, but seeing as he’s a great fit for 3-4 defense, it makes it slightly tougher. Extending Cousins is NOT an easy procedural move because of negotiations with his camp, which will rightfully try to maximize his value. Trading him may involve some contract maneuvering as well, which is why I went with Hunter.

This is tough to predict because it depends on what they do this offseason. If Cousins is extended and Hunter is retained and eventually paid, they could be back in a precarious cap situation reasonably quickly if they spend big in free agency. But at this point, it’s just guessing because there are so many variables at play.

As an economics guy (like Vikings’ new GM Kwesi Adofo-Mensah), I would hope that the new regime would clear cap hurdles so they can freely construct the roster to fit Adofo-Mensah and Kevin O’Connell’s vision. That would provide them with ample assets to shape the roster how they like, which may include building around a young rookie quarterback.

On a related note: Because of the unexpected salary cap decrease in 2021, the Vikings were forced to do things they don’t typically do, like adding void years to players’ contracts to lower their cap hits. The void years add an extra wrinkle to the future as they push money down the road, but the way they were spread out and the total amount(s) of potentially dead money is not enough to cause much concern.

Yes. Barring a return to the team, Anthony Barr will cost $9.89M against the Vikings’ cap. Considering his knee issue, which has been described as “chronic,” it’s looking doubtful that he’ll rejoin Minnesota this season. His 2022 and 2023 seasons will void if he’s not re-signed by March 16th.

Not sure I’d call it likely that the Vikings move on from Hunter, but it’s a possibility.

I reached out to PFF cap guy Brad Spielberger to answer this question because of how knowledgeable he is with value in today’s NFL. His reply:

“Don’t think an early first is on the board. Hunter is a very good player, but I think late 1st is probably best case scenario.”

So, a late first-rounder or conditional first seems more realistic. Top-10 seems like a stretch considering the way the last two seasons ended for Hunter. Including a 2023 3rd may help, but even that might not be enough to move the needle for New York.

I’d put a Cousins extension in the $36-40M per year range. At those numbers, he’d be the 5th or 6th highest paid QB in the NFL. That may change throughout the offseason as more quarterbacks reach new deals with their respective teams.

In terms of contract length, three years has been his sweet spot with the Vikings so far. So I could see a new extension being something like 2-years, $77M making the total package worth $112M over three years. Here’s a SUPER CRUDE example of how it could be structured. It’s very similar to his current deal, just with more money.

Not yet, but I can potentially see it happening next offseason. With the Vikings looking like they’ll be switching to a 3-4 defense, it’ll be interesting to see how he fits in. Tomlinson had a fairly strong first season in Minnesota, but he’ll likely need to prove he can handle a new role if he wants a second contract as a Viking.

I see this a lot, and I THINK I understand the message. When people say this, they mean that if you’re good with the salary cap, it should never be an issue because there are SO many ways to adjust contracts, and things almost always remain flexible. While this is true, let me tell you…

The cap is NOT a myth. It exists, and there are consequences to breaking salary cap rules. Last year, the Vikings were stripped of a 7th-round pick for violating rules, including a 2019 practice squad player.

Not only that, the cap has a large influence on personnel moves. I think Greg Tompsett, a Buffalo Bills salary cap guy (@GregTompsett), put it well when he said, “People think the Salary Cap is a myth. It is not. But like a wife with six credit cards, teams can hide their expenditures for quite a while.”