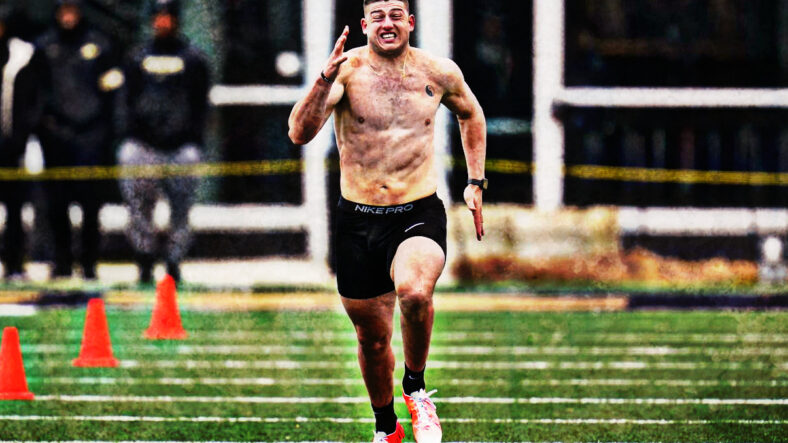 If PFF is correct with its latest mock draft, though, George Karlaftis from Purdue will soon have white horns on his helmet. Stingley Jr. went to the Houston Texans, Ahmad Gardner tumbled to the New York Jets, and Karlaftis became a Viking. Connor McQuiston of PFF wrote about the Karlaftis choice:

“New acquisition Za’Darius Smith should help alleviate some of these concerns, but he will be on the wrong side of 30 when the season starts. Karlaftis’ 25.4% pass rush win rate ranked fifth in the FBS last season among players with at least 250 pass-rush snaps, giving the Vikings much needed pass rush juice with the frame and strength to bump inside on pass-rush downs if necessary.”

Emigrating from Greece at age 13, Karlaftis was a Purdue Boilermaker for three seasons, tabulating 14 sacks in 26 games. Oliver Hodgkinson from Pro Football Network called Karlaftis a man who “moves incredibly well, surprisingly so, [displaying] excellent burst, can change direction smoothly, and can often be found chasing down the opposition.”

VikingsTerritory‘s Josh Frey said about Karlaftis, “Everything about Karlaftis is mystical from his physique of a Greek god, his water polo background, to his pure power as a pass-rusher; it’s hard to argue that any pick is too high for him to go in this class.”

On the other hand, ESPN’s Jordan Reid ranked the Greek man as the 34th-best player in the 2022 draft class, assigning Karlaftis a Round 2 grade.

No matter what comes of Danielle Hunter’s ever-evolving contractual situation — chatter will likely heat up again next spring — or how the Za’Darius Smith experiment pans out, drafting Karlaftis would set the Vikings up for the long-term at EDGE rusher. For now, that future rests in Hunter sticking around, plus Wonnum, Jones II, and Robinson developing.

A cornerback is still the favorite to land in Minnesota on Thursday, but pass rushers like Karlaftis, Jermaine Johnson II, and Travon Walker cannot be ignored, mainly because this draft is Kwesi Adofo-Mensah’s first draft as boss.