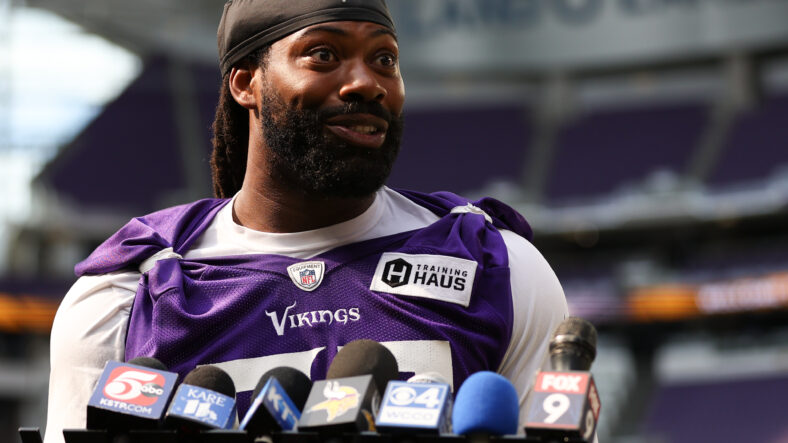 Back in March, the Green Bay Packers made a rather predictable move. Saving over $15 million in cap space, the Minnesota Vikings rival cut edge rusher Za’Darius Smith. Eventually, he would sign with the Vikings, and it’s been one of only many things that have gone wrong for Green Bay this season.

As things stand through Week 8, the Minnesota Vikings are 6-1, the Green Bay Packers are not good, and Za’Darius Smith holds a share of the NFL lead in sacks with 8.5. His three sacks of Arizona Cardinals quarterback Kyler Murray on Sunday helped to vault him up the leaderboard.

After injury allowed Smith to play just a single game for the Packers a season ago, Smith was sent packing and found a home on the opposite side of Vikings defender Danielle Hunter.

Hunter, like Smith, is a well-respected pass rusher looking to regain footing coming off an injury in 2021. Unlike Hunter, Smith’s injury history is less populated, and an expectation he could return to form was a bit more believable.

Through seven games with the Vikings, Smith has contributed at least a half-sack in each contest. He’s had five sacks in his last two games, and his 13 tackles for loss lead the NFL as well. After Green Bay could spare cap room by cutting Smith, the Vikings handed him a three-year deal that he’s already massively out-performed.

Sunday was a bit extra fun for Smith, who saw legend Jared Allen inducted into the Minnesota Ring of Honor at halftime. Following one of his three takedowns of Murray, Smith busted out the iconic roping gesture Allen made famous while climbing up the Vikings all-time sacks leaderboard on his own.

There’s still a long season left, with ten games through Week 18 and another hopeful handful on the way to a Super Bowl. Smith must continue monitoring his body and keep himself healthy to anchor this new 3-4 defense, but nothing to this point has suggested it will be a cause for concern.

As the Vikings continue to work through secondary issues and look to make adjustments against the passing game, the more Smith and Hunter can take down the opposing quarterback, the better.