Will Goodwin’s Win-Loss Prediction for 2022 Vikings 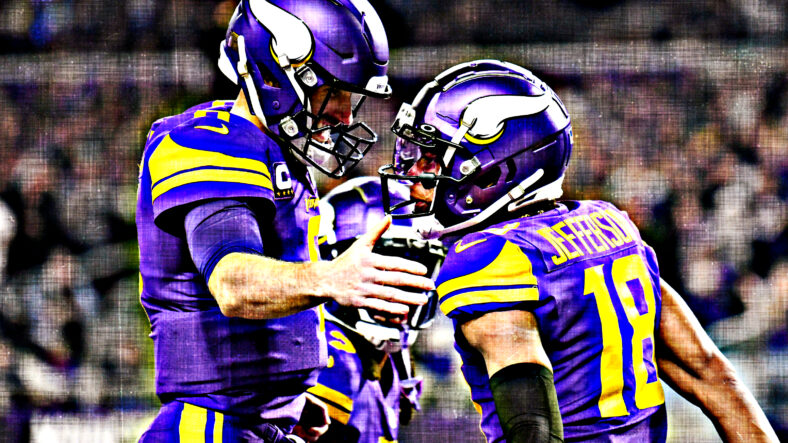 Will Goodwin’s Win-Loss Prediction for 2022 Vikings

All of the hype and speculation is over. Green Bay comes to town this weekend, and the rubber is about to hit the road. Or, the cleats will hit the rubber pellets.

The Vikings are looking to rebound from back-to-back disappointing, losing seasons and will do so under new leadership. Most Vikings fans are anticipating that bounce-back season, as do I. Let’s break down the Vikings’ 2022 schedule, game by game, and predict where the Vikings end up come January.

Catching Green Bay in Week 1 at home is a break for Minnesota. With a raw and unproven receiving corps replacing Davante Adams and many injuries, Green Bay has their work cut out for them. The Vikings will start the season with a win.

Facing a Monday night in a raucous Lincoln Financial Field against a juiced-up team looking to prove something, Minnesota will be competitive but lose on the road.

The Lions are improved and almost beat the Vikings twice last season. Minnesota won’t take them lightly this time and will win handily to improve to 2-1.

The last time Minnesota played in London was 2017, when they beat the Browns, the same season in which the Vikings went to the NFC Championship Game.

New Orleans’ talented defense shouldn’t see any regression. However, Jameis Winston is not an ideal quarterback for a contender. Minnesota wins, rolling to 3-1 after a 1-3 start last season.

Chicago isn’t going to be good. Allen Robinson is gone, Roquan Smith wants out, and Justin Fields will have to acclimate to his second head coach in two years. A loss would be, well, embarrassing. The Vikings will win handily again, moving their division record to 3-0.

This is a sneaky tough game on the Vikings’ early schedule. A stout defense, many weapons, and scorching early-season Miami temperatures make this a tough matchup for Minnesota. Even with a loss, the Vikings will be 4-2 entering the bye.

Kyler Murray hasn’t proven to be a big-game quarterback. Although this doesn’t exactly qualify as a “big game,” it is on the road against a team they could be vying for playoff seeding with. On the other hand, Kirk is elite at home in the early afternoon window. The Vikings will beat the overrated Cardinals and improve to 5-2.

The Commanders defense is strong, but with no real field-flipping weapons on the outside, Wentz will be forced to force the issue. The Vikings will make quick work of Washington and improve to 6-2.

Probably the toughest game on the schedule. Mid-November in Buffalo, potentially in a snowstorm. I don’t see many scenarios where the Vikings win this game.

For the third season in a row, Minnesota will host Dallas. The first two didn’t go as planned; this one will. Dallas’ offensive line has regressed and aged, Amari Cooper and Cedric Wilson are gone, and Mike McCarthy is still the head coach. The Cowboys still have playmakers, but this matchup has Minnesota written all over it.

I’m not really sure what to make of New England. No Josh McDaniels, no named coordinators, still no weapons. However, it’s Belichick on a short week against a rookie head coach. Patriots win a low-scoring, one-score affair.

Zach Wilson has some playmakers on the outside, including ex-Viking Tyler Conklin. However, Minnesota’s coaching staff will have 10 days to prepare a game plan to confuse young Zach. Minnesota will win, improving to 8-4 leading into the division-heavy stretch run.

A tougher version of the Week 3 matchup, on the road against a proud Dan Campbell-led team. Minnesota’s defense won’t forget the 2021 debacle, however, and will put the clamps on early to avoid any last-second drama.

On both sides of the ball, Indy brings a physical style of play; Minnesota will have to absorb and hand out punches. Jonathan Taylor will be tough to stop consistently for a defensive front, albeit improved, that has struggled against the run the last couple of years. Minnesota will lose the time of possession battle, and ultimately, the game.

The Giants are trending toward being the second-most relevant team in their own stadium. Until there’s proof of Daniel Jones making real progress, I have no reason to believe he will go on the road against a team sniffing a division crown and win. The Vikings will improve to 10-5.

It’ll be cold and snowing in Green Bay on January 1, an unwelcome environment for a dome team coming off 5 of 6 games at home. Minnesota has won late-season games in Lambeau before, but this will be too much to ask against a revenge-hungry Aaron Rodgers vying for a division title. The Packers will win a close one, bringing the division race down to the final week.

The Vikings will be ready for the cold and will have an opportunity to clinch the division. Playing motivated, Minnesota will control the game from start to finish, and put themselves in position to win the NFC North for the first time since the aforementioned 2017 season.

With Green Bay having a slight regression following three straight 13-win seasons, Minnesota will be in the thick of the division race. Depending on tiebreakers, the Vikings’ 11-6 record will be good enough to win the North and host a first-round playoff game inside the raucous US Bank Stadium.