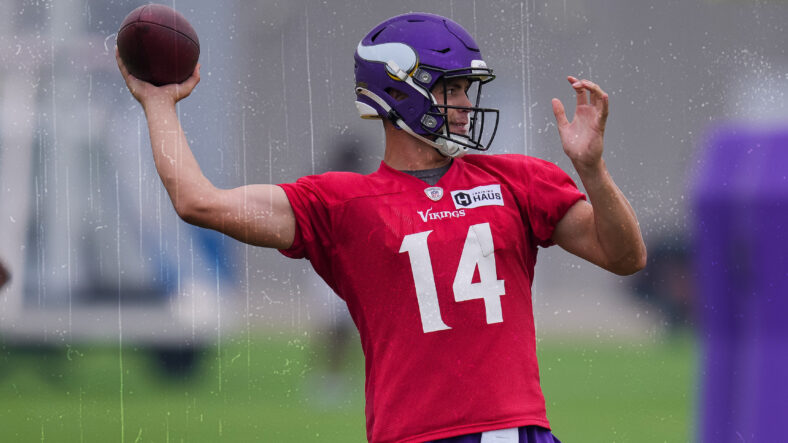 In what may be an indicator that another roster move is incoming, the Minnesota Vikings released quarterback Nate Stanley on Tuesday.

Stanley was drafted in the 2020 NFL Draft, found in the 7th Round by Rick Spielman in the same draft used to onboard Justin Jefferson and K.J. Osborn. Until Tuesday, Stanley was the team’s QB4 behind Kirk Cousins, Kellen Mond, and Sean Mannion.

The Iowa alumnus never saw regular season playing time with the Vikings, but he is now free to sign with any team — which is a reasonable possibility as all NFL rosters are still at the 90-man cutoff. Rosters will be trimmed to 53 players in late August.

Like any Vikings quarterback, fans watched Stanley with a keen eye for two years, waiting to see if he would blossom into something more than “just another late-round draft pick.” To date, he has not, but the free agent is only 24 years old.

Stanley’s release is also intriguing because it implies another Vikings roster move is on the way. NFL teams general carry 90 men into training camp, slash the roster to 85 by August 16th, 80 by August 23rd, and the 53-man fruition on August 30th. While the Vikings aren’t “required” to sign a free agent replacing Stanley, this would be “how they do it” if a signing was on the way.

Notably, Minnesota has been linked to veterans Kyle Rudolph, Ndamukong Suh, JC Tretter, and others in the rumor mill. Rudolph would bolster TE depth as, after Irv Smith on the roster, the Vikings TE situation is bleak. Suh would instantly start on the defensive line, presumably usurping Armon Watts’ incumbent job. And then Tretter, a center, has been desired by Vikings fans for four months because of his upper-echelon pass-blocking talents.

New general manager Kwesi Adofo-Mensah is unlikely to sign another quarterback, though. A battle for QB2 is upcoming, with training camp kicking off this Sunday. The aforementioned Mond and Mannion will duel to determine Kirk Cousins’ primary backup, and a fourth passer is simply not needed — unless injuries emerge. Otherwise, Adofo-Mensah could have kept Stanley until the end of preseason.

Stanley spent most of his Vikings life on the team’s practice squad. If picked up by a different team, he’ll audition for a QB3 job or another practice squad assignment.