Vikings Don’t Care about The Past 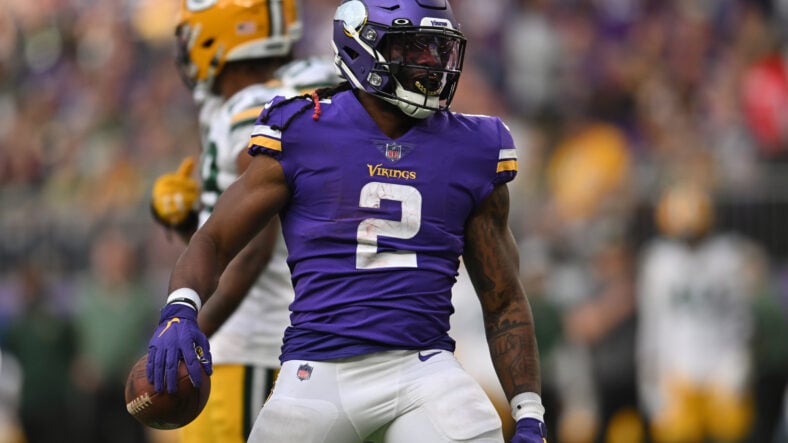 Football is back, and life is good if you’re a Minnesota Vikings fan, starting the season by beating the Packers — it doesn’t get much better than that.

There were many things to be excited about on Sunday, not just the performance but the energy that is abundant throughout the entire Vikings organization. That was really evident in the postgame celebrations, which saw everyone from ownership down involved in the locker room euphoria.

There was one comment from Kevin O’Connell’s locker room speech that really stood out, “We don’t really care what’s happened in the past because everything we do is about moving forward.”

As a base to build a successful team, that’s a fabulous ideology.

It is an important message not only to the Vikings players but also to the fans. The history of the Vikings — and Minnesota sports in general — is littered with great teams who failed to win. Many Vikings fans expect their kicker to “miss when it matters” because painful memories fester. Carrying that kind of baggage breeds negativity, and when the team performs like it has the last couple of years, there is almost an expectancy of failure.

Most people involved with the Vikings were miserable by the end of the Mike Zimmer era, which is why the Wilf family’s decision to find a leadership group that would change the entire culture of the Minnesota Vikings was absolutely the right one. The whole franchise needed a fresh start and a reboot.

It was time for the Vikings to gamble on a fresh approach. Regarding the product on the field, it felt like the league has passed the Vikings by while other teams were getting fresh new ideas from young or adaptive coaches. The Vikings got stale despite possessing the weapons for an explosive offense, which was indeed explosive at times, but it often lacked decisiveness in critical moments.

There was no such issue as the Vikings found themselves on 4th and 1 at the four-yard line on their opening drive. There was no hesitation, and O’Connell called a decisive play resulting in a wide-open Justin Jefferson scoring an easy touchdown. It’s only Week 1, but this Vikings team was everything I wanted it to be — aggressive, exciting, and fun to watch. If they can repeat that 16 more times, then this will be an enjoyable season. How far can this Vikings team go?

Not only did O’Connell lead his Vikings team to victory in his first ever game as head coach — coming up against the team favored to win the division and expected to be a main contender in the NFC — they did it dominantly. Once they kept the Packers out of the end zone on 4th and goal at the 1-yard line, there was no looking back.

Confidence will be high, but there is no time to rest on your laurels. To quote coach O’Connell, “We don’t really care what’s happened in the past because everything we do is about moving forward.”

Week 2 brings another team expected to be in contention for the playoffs. The Vikings go on the road to Philadelphia to face the Eagles. You can relish this week’s victory, but for O’Connell and his team, it’s about moving forward and proving this was no Week 1 fluke. If they can back this win up with another one, that would be a statement.