The Vikings Top Offensive Performers at Eagles, per PFF 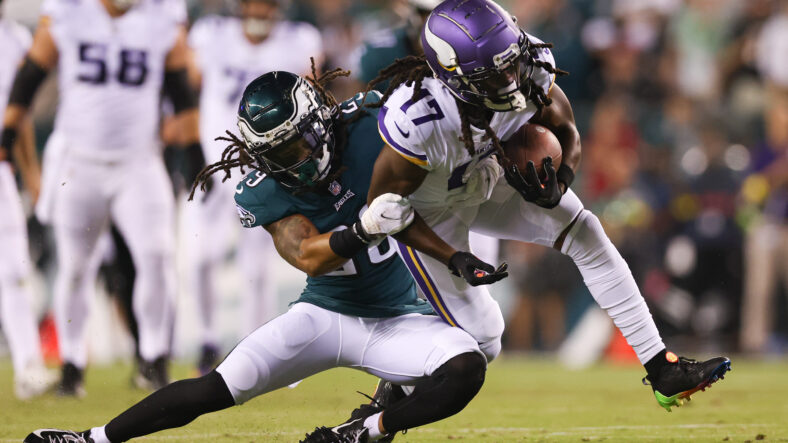 The Minnesota Vikings fell to the Philadelphia Eagles on Monday night, 24-7, with a score eerily similar to how the Vikings dispatched the Green Bay Packers in Week 1 (23-7).

It was all for nil, though, as the Vikings were outclassed on Monday Night Football.

And there, in a nutshell, is why the Vikings didn’t win against the Eagles. Aside from O’Neill, none of the grades were very good. Last week’s scores in the victory over Green Bay were significantly higher:

Brian O’Neill was his dependable self, which surprised no one. Justin Jefferson endured a forgettable game, causing one of Kirk Cousins’ interceptions. His performance versus the Eagles may end up as the “worst” game of his 2022 campaign, tallying just 48 yards.

Garrett Bradbury‘s 60.5 grade is wildly on brand. He lives around that mark while struggling with pass protection but performing well via run blocking. Irv Smith had scapegoatish night, dropping a sure-fire touchdown pass in the 2nd Quarter that would’ve fundamentally changed the game.

Adam Thielen curiously wasn’t targeted for a second consecutive game until garbage time was on the agenda. The Vikings must figure out a way to utilize his reliable skillset. Otherwise, something is severely amuck.

In a loss, “the bad” must be highlighted, so these were the worst performers on offense:

Anytime the QB1 and RB1 make the naughty list — while the defense allows 486 total yards — a loss is imminent.

That was the case in Week 2 for a Vikings team that will soul search for the next five days in preparation for the Detroit Lions at home this weekend.