The Vikings Aren’t a Contender. Yet. 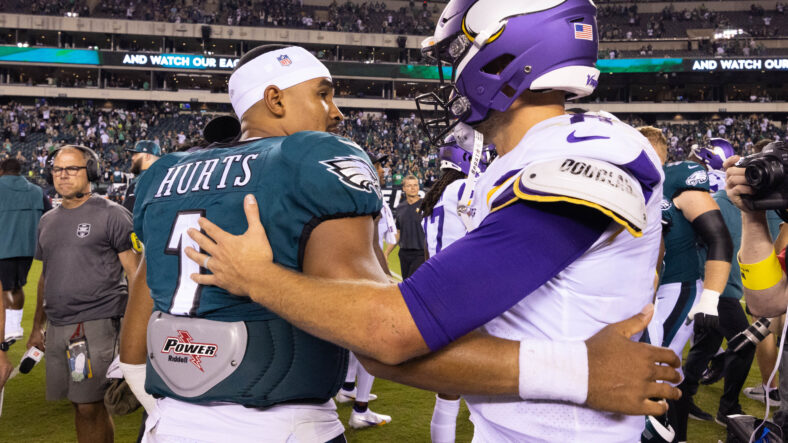 The Minnesota Vikings enter Week 6 boasting a three-game winning streak, sitting at 4-1 atop the NFC North. This is uncharted territory for these Vikings, whose best start through five games since Kirk Cousins arrived was 3-2 in 2019.

The Vikings’ hot start has subsections of the fan base, as well as national media, fawning over the purple, while others are not so impressed. ESPN loves the Vikings, ranking them 4th in their latest Power Rankings. Philadelphia is the only NFC team ranked ahead of Minnesota.

ProFootballTalk, on the other hand, thinks the close victories are fool’s gold and that all will come crashing down sooner or later.

Five games are hardly enough evidence to deem a team worthy of championship considerations. However, based on what we have seen through those five games, should the Vikings be considered a real contender to be the NFC’s representative in the Super Bowl?

To begin with the glaringly obvious: the defense isn’t there yet. No matter how you slice it, Ed Donatell’s effort to redeem the last two years of Mike Zimmer bleh has garnered largely underwhelming results. Minnesota is 22nd in yards allowed, 23rd in passer rating allowed, and 14th in points allowed [1]. Not egregious, but definitely nothing to write home about, either.

Mercifully, the Vikings’ defense has stepped up to make big plays when needed, making good on Kevin O’Connell’s “situational masters” emphasis. In each of Minnesota’s four wins, the defense has bent nearly to the point of breaking but has always held the line. The goal-line stand against Green Bay, the 4th-down stops against Detroit, and the Cameron Dantzler strip of Ihmir Smith-Marsette prove that. Regardless of the yards allowed, Donatell’s crew does just enough to bring home a victory.

Stepping up in big spots is a welcome sight, considering the 2021 iteration of the defense allowed touchdowns on 32.4% of opponent drives in the last 4 minutes of either half, which is the worst in the league since 2000. However, situational mastery alone will not win you games against elite offenses, which will eventually expose a subpar defense, and the bending will lead to breaking.

Another concerning nugget about Minnesota’s poor defensive performance is that it has come against sub-par quarterbacks for the most part. Aside from Aaron Rodgers and Jalen Hurts, Donatell’s unit hasn’t had to shut down any world-beaters.

However, peeking at the remaining 12 games, the competition doesn’t get much tougher. Week 8 hosting Kyler Murray will pose a challenge to a Vikings defense that struggled to stop him in 2021 and has historically struggled with mobile QBs. Going to Buffalo and Josh Allen in Week 10 is about as difficult as they come, and of course, there will be one more date with Rodgers in Week 17. Apart from that, the Vikings face a whole lot of meh.

Further, the NFC isn’t exactly chock-full of all-timers, either. Rodgers, Tom Brady, and Matthew Stafford have been there, done that, and Murray and Hurts have given the Vikings fits. Other than that, the NFC quarterback competition is mediocre.

Kevin O’Connell’s side of the ball hasn’t fully clicked yet but has flashed its capabilities. Ranking middle-of-the-pack in most overall offensive metrics, Minnesota clearly hasn’t hit the stride that many think they will under their Super-Bowl-winning coach.

The explosive plays aren’t there yet, either. Despite Kirk Cousins’ ability to hit on the deep ball, the Vikings are 28th in the league in pass plays over 20 yards with only 12. They have zero such plays on the ground, causing many to worry if Dalvin Cook has anything left in the tank.

However, in last week’s come-from-behind victory over Chicago, we saw our first real glimpse of what this offense could be when it’s humming. Cousins led three consecutive touchdown drives to start the game, in which he completed all 17 throws for 176 yards. That efficient offensive outburst showed that Kirk and Co. can be elite. We just haven’t seen it consistently yet.

Five weeks in, this new-regime Vikings squad is not a real contender in the NFC. San Francisco, Dallas, and Tampa Bay all have other-worldly defenses, the Rams are the champs until proven otherwise, and Jalen Hurts has the Eagles going at a different speed than everyone else. But a 4-1 start is nothing to sneeze at. Minnesota isn’t there yet. But I suppose that’s why they play 17.