The Plot Thickens at QB for Saints-Vikings 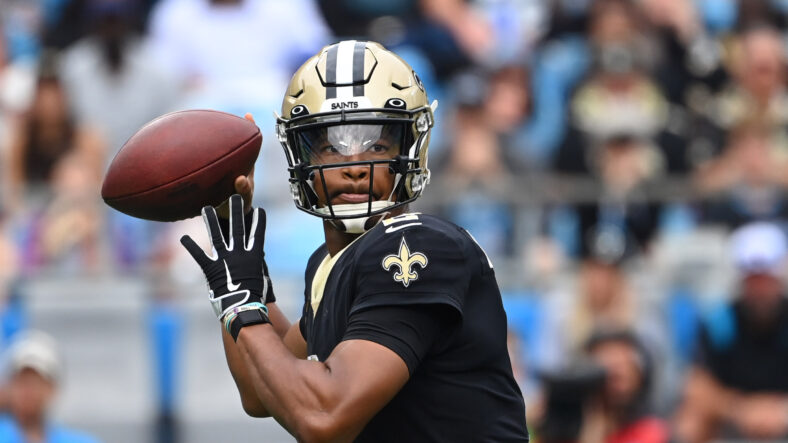 Barring something totally bizarre occurring to Minnesota Vikings quarterback Kirk Cousins in the next three days, the “road” team in London is set at quarterback. But the New Orleans Saints situation is less clear.

The plot thickened on Thursday for the Saints as QB1 Jameis Winston didn’t practice for a second consecutive day, according to Katherine Terrell of ESPN.

Winston is nursing a back injury.

Winston has faced the Vikings just once in his career, losing to Minnesota in 2017 at U.S. Bank Stadium. Minnesota toppled Winston’s old team, the Tampa Bay Buccaneers, in Case Keenum’s first win as the Vikings QB1 five years ago.

If Winston is indeed a no-go in London, veteran signal-caller Andy Dalton would likely get the nod, with perhaps an enhanced side dish of QB-TE Taysom Hill. If Dalton starts on Sunday, he will have played against the Vikings as a QB1 of 4 different teams — the Bengals, Cowboys, Bears, and Saints.

Too, Dalton in the saddle would be a rematch for Londoners. In 2016, Kirk Cousins, then the quarterback for the Washington Commanders, took on Dalton’s Bengals en route to a 27-27 tie. Cousins authored a career-high 458 passing yards and 2 touchdowns to Jamison Crowder and Jordan Reed.

Truth be told, some Vikings enthusiasts would rather play a hobbled Winston than a healthy Dalton. Nicknamed The Red Rifle, Dalton is arguably a Top 3 backup quarterback in the NFL, and the Saints would likely utilize the aforementioned Hill via playcalling — and Hill has served as a mini-Viking killer over the years.

Regardless, the Saints face a quasi-must-win situation in England. A fringe playoff team, the precedent for teams bouncing back from 1-3 records is limited. Just 15% of teams since 1990 (when the NFL expanded playoff format to six teams per conference) reach the postseason following a 1-3 start.

The Saints and Vikings last met on December 25th, 2020, when running back Alvin Kamara rushed for 6 touchdowns. It was the final time the Vikings would ever see Drew Brees or former coach Sean Payton.

The Vikings are favored to drop the Saints by 2.5 points, and that point spread curiously hasn’t fluctuated amid Winston’s injury uncertainty.

Behind Winston, Dalton, and Hill, Jake Luton is the Saints QB4 on the practice squad.