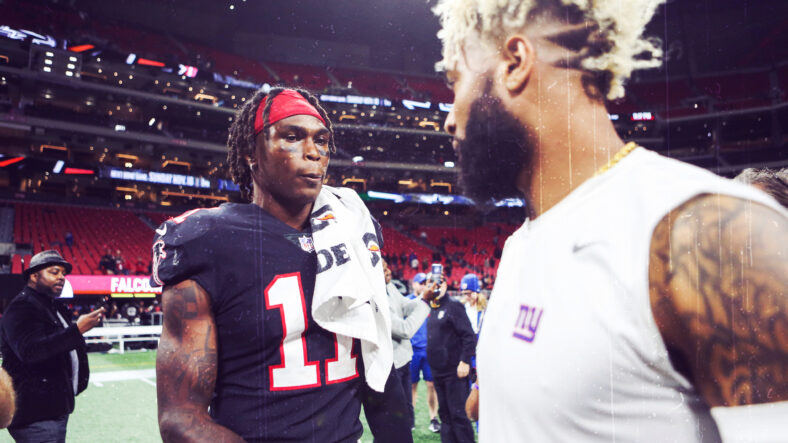 Pretend for the day one of the most populous cities in the United States without an NFL team was awarded a franchise in 2022. Such cities include San Antonio, San Jose, Columbus, El Paso, and Oklahoma City.

If there was no expansion draft [for some reason], this is the roster the hypothetical general manager could construct as of May 24 via free agency.

Newton’s days as a bonafide starter are kaput in the NFL, but he’ll make a serviceable QB2 somewhere — if he’d accept such a gig.

Barber is suddenly a journeyman running back, spending time with Buccaneers, Commanders, and Raiders. He’s 27.

Either Julio Jones had a quiet 2021 and is poised for a resurgence — or he’s nearing the end of the road.

Whichever team signs on the dotted line for Beckham will receive a damn good football player ready for a playoff push. But he won’t be healed from injury until October or November.

Fuller will be signed before too long, but he never remains healthy, so teams aren’t flocking to his free-agent doorstep.

We had to tap Gronkowski for this spot, and he’ll just re-sign with Tampa Bay this summer.

Reiff’s team reached the Super Bowl in February without him. Bummer.

Not great; not bad. Flowers is a decent guard who should sign with a team this summer.

A Viking killer, Minnesota should sign Hicks just so he doesn’t play somewhere else.

Joseph is old, has a sweet Vikings tattoo on his body, and is a free agent. At this age, he should chase rings.

This Super Bowl champion hasn’t missed a football game since 2011.

Dunlap is a two-time Pro Bowler who, like Nassib, will sign with a team as a situational pass rusher.

Vikings fans thought Anthony Barr would be a relatively hot commodity in free agency. He wasn’t. Barr has been linked in the rumor mill to the New York Jets and Dallas Cowboys.

Schobert had a down year in 2021, but he’s a tackling machine otherwise.

Haden, like many free agents on this list, is getting old. He’s a three-time Pro Bowler around the same age as Patrick Peterson.

Rhodes stunk during the season finale of his Vikings career, but he was revitalized in Indianapolis, to an extent. He isn’t quite done.

Collins was a tyrant during his first four seasons with the New York Giants but never really took off in Washington — at least at an All-Pro or Pro Bow level.

Safety availability in free agency is arid at the moment, and Gipson makes the cut here almost by default.

Badgley was a part of the snakebitten special teams culture with the Chargers. He’ll be the first guy signed when another team’s kicker infuriates its general manager.