The Bills Key Players vs. Vikings 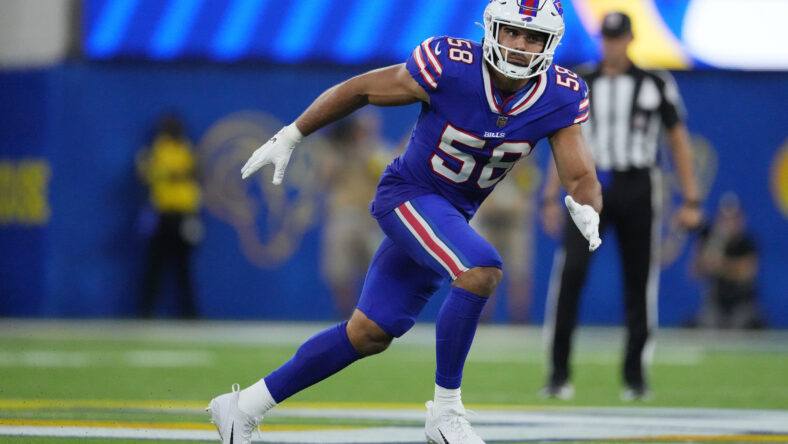 Whatever the reason, a road trip to Buffalo to take on the Bills is as stern of a test as any team can face. It just so happens that Bills quarterback Josh Allen is an injury doubt. If he doesn’t play and the Vikings win, there will be more comments of “yeah, but..”

You can only beat what is in front of you, and there are no easy games in the NFL. There’s more to the Bills than their quarterback, and they are still a formidable team whether Allen plays or not. If he does miss the game, here are the Bills key players who the Vikings will still have to account for.

The first of the Bills key players needs no introduction. Stefon Diggs spent five years in Minnesota before he was traded to the Bills for a deal that included a first-round draft pick in 2020. Diggs will forever be remembered for the Minneapolis Miracle, and it just so happens that the quarterback that day could be throwing the ball his way again on Sunday. Former Vikings QB Case Keenum is the Bills backup quarterback and will play if Allen isn’t good to go.

Diggs was an excellent wide receiver during his time with the Vikings, but he has gone from strength to strength in Buffalo. He is now unquestionably one of the top five wide receivers in the league. His third year with the Bills promises to be his best, having already racked up 857 receiving yards and seven touchdowns through his first eight games. That puts him on pace for over 1800 yards for the season. The Vikings secondary will have a big job on their hands to prevent Diggs from taking over the game.

Last year, Von Miller stopped in Los Angeles to win his second Super Bowl. It was a brief stay. He arrived for the second half of the season, helped the Rans hoist the Lombardi Trophy, and left.

Then he found his way to Buffalo this season. He is assuredly intent on making it a hat trick before he hangs up his cleats. The second-overall draft pick in 2011 has had a Hall of Fame career, including an MVP performance in his first Super Bowl win with the Denver Broncos and seven All-Pro seasons. Miller is 33 years old now, but there has been little sign of slowing down.

This season Miller has 29 total pressures, 7 sacks, 9 QB hits, 9 tackles for loss, 2 pass deflections, and 1 forced fumble. Pro Football Focus grades him as the 7th-best EDGE rusher in the league so far this season, with an overall grade of 88.5. The veteran is still a game-wrecker, and the Vikings offensive line will need to slow him down.

Having missed last week’s game against the New York Jets, Matt Milano looks set to return to action this week against the Vikings. The linebacker started the week on the injury report with the oblique muscle injury that kept him out against the Jets. However, he logged a full practice on Thursday and looks good to go barring any setbacks.

That’s big news for the Bills, despite all the attention on their quarterback. Injuries on defense could be a more significant factor. Greg Rousseau and Jordan Poyer have been ruled out of the game, while Kaiir Elam is listed as doubtful, and Tremaine Edwards is listed as questionable. That is up to four starting defenders the Bills could be missing.

The Vikings have two excellent offensive tackles, with Christian Darrisaw staking a claim as one of the very best in the league this season. The interior is not so dominant. The offensive line has mostly played well, but the interior relies a lot on double teams and help from running backs and tight ends regarding pass blocking.

The Bills rarely blitz, meaning if Darrisaw and Brian O’Neill can win their matchups on the edge for the Vikings, the Bills will need their interior defensive linemen to dominate.

Buffalo has Ed Oliver and DaQuan Jones on the interior, two solid defensive linemen. Jones is the better pass-rusher, receiving a 73.6 pass-rush grade from PFF. So far, he has 15 total pressures, 4 QB hits, and 3 sacks. Getting pressure up the middle without having to blitz is vital to the Bills defense every week, even more so when coming up against players like Justin Jefferson and T.J. Hockenson, where the more defenders they can drop into coverage, the better.