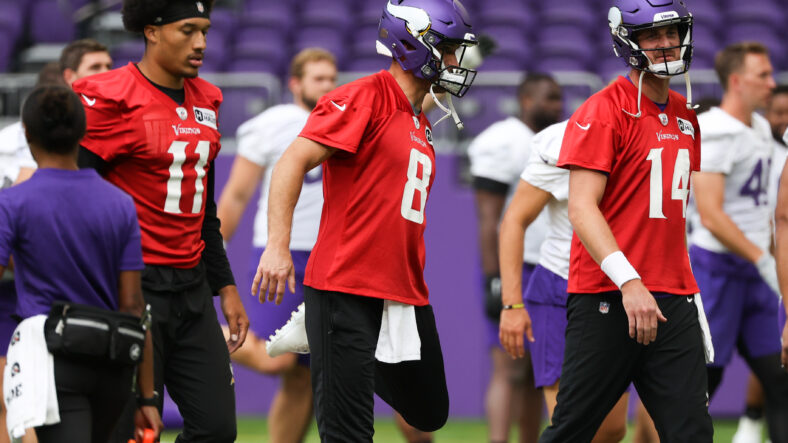 The Minnesota Vikings are ready to embark on their first season under new leadership. Gone is Mike Zimmer, and in is Kevin O’Connell. That seems to be enough momentum to give veteran signal-caller Kirk Cousins some true MVP steam.

Earlier this week, Adam New noted Michael Irvin selecting Kirk Cousins as his 2022 MVP. Notably, Irvin is high on the Vikings as he also took Minnesota to get a week one win at home against the Green Bay Packers.

The former Dallas Cowboys wide receiver isn’t alone in his thought process, though. Good Morning Football’s Kyle Brandt came out with a two-minute segment on why Cousins is the sleeper pick for MVP. While he made plenty of great points, notably suggesting every few years there’s a surprise winner, the resonating factor was, “Right coach, right receivers.”

If there’s something to define what Minnesota hopes for this year, it’s “right coach, right receivers.” In bringing over O’Connell from the Los Angeles Rams, new general manager Kwesi Adofo-Mensah gets one of the brightest offensive minds in the game. The Rams were once again something like the Greatest Show on Turf a season ago, and with the Vikings skill position players, the hope is that process would translate.

Gone is the defensive-minded, old-school approach of Mike Zimmer. While Dalvin Cook can still be expected to carry the rock plenty, it should look different and not be as predictable. He’ll also see plenty of action split out wide or in making catches as a receiver. Add in the fact that Minnesota employs arguably the best wide receiver in the game in the form of Justin Jefferson, and you have two premium talents leading position groups.

A season ago, wide receivers coach Keenan McCardell helped K.J. Osborn take a significant leap forward, and another could be in the making this year. Adam Thielen is back and healthy, operating as a trusted veteran with exceptional route running ability. It’s probably lofty to think that Jalen Reagor will ever find his first-round pedigree, but if he can be taught some new tricks, there’s another usable weapon at Cousins’ disposal.

All of this represents a perfect storm, and if the Vikings are being slept on as a contender, they’ll need someone to lead them to those heights. At its core, the MVP is essentially a quarterback award, and no matter who puts up the biggest numbers in getting them there, it will be Cousins that ultimately gets the credit.

You’d be hard-pressed to find anyone calling the longtime veteran a favorite, but I’d be far from shocked if the betting odds don’t shift in his favor as the season goes on.