Should the Vikings Pursue a Kicker Trade? 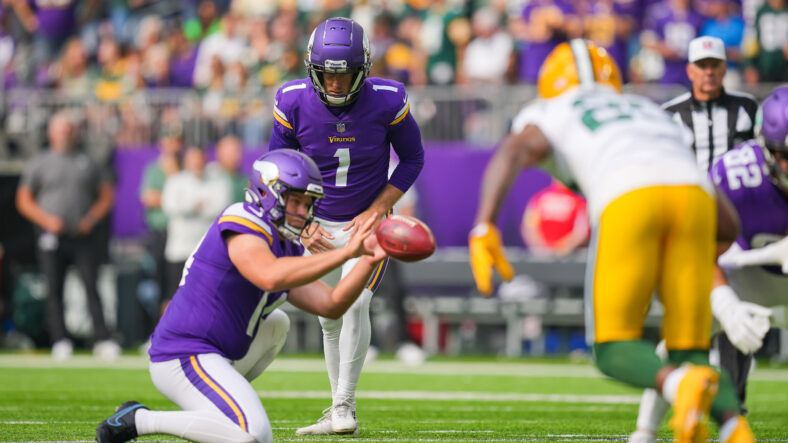 The NFL trade deadline is tomorrow, so the rumors are abundant. One idea that hasn’t received as much attention is whether the Vikings ought to pursue a trade for a kicker. At this point, Kwesi Adofo-Mensah should at least consider the option.

Coming into the season, I – like many others – believed that Greg Joseph was going to do an excellent job. He had a great offseason and seemed to confirm our confidence with a rock-solid Week 1. Since that time, Joseph has been very inconsistent.

Currently, Joseph is last in FG% and in XP% among qualifying kickers on Pro Football Reference. His 64.3 FG% is well below where an NFL kicker needs to be. Ditto for his 84.2 XP%.

Now, the Vikings don’t have a ton of cap room to work with, so any trade involving a kicker would need to make sense financially. Moreover, it’s entirely possible the team is committed to sticking with Joseph. Allowing him to keep working with Matt Daniels may be the best course of action.

Pulling off a trade, of course, requires a trade partner. The key, then, involves finding a team with both a capable kicker and the willingness to move on from that player. The trade deadline is a “two to tango” situation.

Ironically, one of the first teams to come to mind is the Raiders. Why is that ironic? Well, because they’re employing former Vikings kicker Daniel Carlson. He was drafted by Rick Spielman back in the 2018 Draft, but early struggles led to the kicker getting cut. He has gone on to establish himself as one of the best kickers in the NFL. He hasn’t missed a FG all season and and he missed a single extra point.

The main issue would be the finances (which is to say nothing of LV’s willingness to move on from their excellent player). According to Over the Cap, Carlson carries a cap hit a touch higher than $4.2 million. His deal goes through the 2025 season.

Kickers with cheaper deals may be available. One thinks of Eddy Pineiro, who is playing for Carolina and who has a cap hit below $1 million. He has gone 14/16 on his field goals and 12/13 on his extra points.

Chase McLaughlin is kicking for the Colts. Similar to Pineiro, McLaguhlin has a cap hit below $1 million. He has gone 13/14 on his field goals and is a perfect 8/8 on his extra points. It’s possible that a late-round pick would be enough for Minnesota to acquire him.

The point, folks, is that the Vikings may have some options if they’re interested in a kicker trade.

At 6-1, Minnesota ought to at least consider bringing in a player or two to help solidify areas of weakness. We’ll need to wait and see whether that means Adofo-Mensah will add someone to his special teams. Minnesota is a good team that hasn’t fully reached its potential. Indeed, they still have room to improve. Getting more consistent and clutch kicking is one of the more notable ways the team can take a step forward.