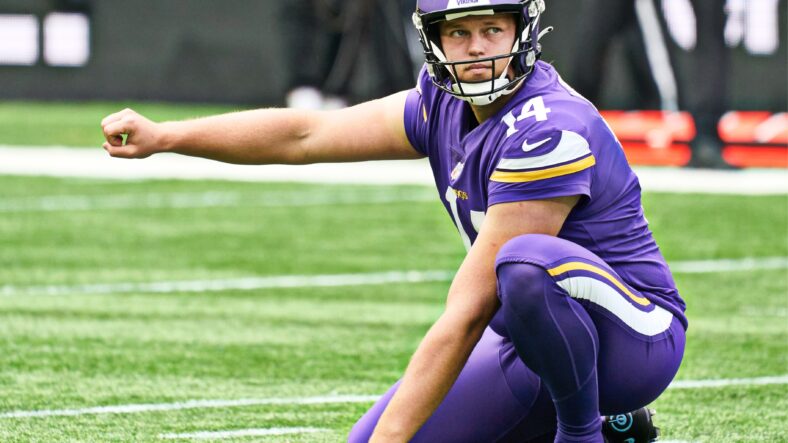 If Ryan Wright doesn’t play excellently, it’s very possible the Dolphins would have built up a formidable lead over the Vikings. It was a rough start for the Vikings’ offense, so the punter had to deal with some less-than-ideal circumstances. Thankfully, the rookie stepped up.

By the end of the game, Wright punted the ball 10 times. Needing to do so underscores how much the team’s offense struggled to move the ball. Keep in mind that in Week 5, Wright only punted the ball 1 time. It went for 15 yards; a penalty meant Minnesota only gained 5 yards off the punt.

In Week 6, Ryan Wright had a 43.9 yard average. 6 of his punts landed inside the 20. Perhaps most importantly, one early punt ended up going for 73 yards. Take a look:

#10 is Tyreek Hill; the Dolphins were probably thinking they had a chance to make something happen. Clearly, he misjudged how far the ball was going to travel; you can see Hill needing to back up a lot to get to the football. Credit to Kene Nwangwu for flying down the field to make first contact and then Josh Metellus for being right behind. Brian Asamoah was also right there.

Football coaches commonly talk about complementary football. The basic idea is that – in an ideal world – the three parts of football will complement each other, setting up the other area for success. By failing to gain yards, the Vikings’ offense didn’t set up the defense for success. Wright’s brilliance was able to make up for the offense’s struggles, thus putting Ed Donatell’s group in a much better position to succeed.

Moving forward, the Vikings will need to ensure they fix some of the issues that have been slowing them down. Indeed, both the offense and defense have much to improve on.

The hope, though, is that the punting remains consistent. Sure, the Week 5 mistake was discouraging, but overall it has been a great season for Ryan Wright. He’s still near the very beginning of his NFL career, so the potential is there for him to keep improving. If he does so, Wright may end up solidifying himself as one of the best punters in the league.

His Week 6 effort did much to help the Vikings climb to 5-1.